Life and Loss in Bosnia: That is That

How can we ever live with the slaughter of 8,000 men and boys on 11 July, 1995?  One method is remembrance.  On the 11th of every month, nearly one hundred women walk through Tuzla and convene at the fountain in the middle of old town.  The atmosphere is solemn and congenial at the same time – the women come together to remember their loved ones lost during the Srebrenica genocide, but because it occurs each month there is a level of normalization that allows the women to catch up with each other. 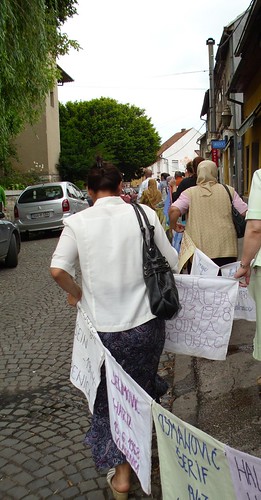 Zifa, one of our beloved BOSFAM weavers, is not a regular at this gathering.  Quinn (my fellow-fellow at BOSFAM) and I, however, did not know this.  When Zifa asked us if we’d like to go to the gathering, we said yes thinking we would accompany her on a regular journey.  Not the case.  In Bosnia, a country with the highest levels of hospitality I’ve ever known, “do you want to go” really means “I will go out of my way because I think you might be interested in seeing [insert any Bosnian event or landmark].”

We found out that Zifa doesn’t usually attend only after we returned to BOSFAM.  Why?  Because this memorial is like a funeral procession.  BOSFAM helped women survivors to sow the names of the lost on pieces of fabric, and made it into a long string similar to Buddhist prayer flags.  At the top of the procession is a banner with photographs of the men killed.  There is a photo on the banner of Zifa’s son, who was 25 when he was murdered in the forests outside of Srebrenica.  Zifa has an understandably difficult time seeing her son’s photo.  I knew that Zifa lost her son, as well as her two brothers and many nephews, and this information often brought me to silence.  To see Zifa put herself through this for us though, her ljepotice (“pretty ones”), brought a landslide of emotions – of love, guilt, deep sorrow, and sympathy.  I was so proud to be Zifa’s “pretty one” as we walked back through town to BOSFAM.

Upon our return we realized our trip had been out of the ordinary for Zifa.  She took a tablet to calm her nerves and laid down, scarf over her face.  At this moment, I felt a need to protect Zifa from anymore pain life might bring her.  Never before had I so fiercely wanted to rewind history and change its course – my own, personal losses seemed bearable if I could only go back and tell Zifa’s son to get out of Srebrenica a week or a month earlier. 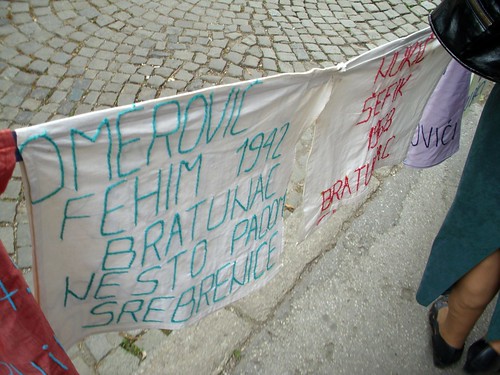 All I can say though is zao mi je (“I’m sorry”).  Even with better Bosnian, it might be all I can ever say to these women, because I simply don’t understand what they’re going through and I certainly can’t shed any light on why this terrible thing happened to them.  As I stood in the center of town, holding one of the flags memorializing a man killed, I turned to my neighbor.  This stranger was my mom’s age, and I spoke a bit with her in my basic Bosnian.  She lost two sons – one was 24 – my age.  Suddenly, I found myself looking at a picture of this young man she always keeps in her wallet.  A man who could have been any of my male friends back in Washington, DC.  She and I stood, both at a loss for words.  I said I was so sorry, that I couldn’t understand how it all happened, and she replied to je to.  That is that.

Before leaving the gathering, I turned to the woman I had befriended and thanked her.  I said I might see her in a month at the burial ceremony in Srebrenica.  We held hands, we hugged and she kissed my cheek.  I’m not sure who was more moved – I suspect it was me – but what had passed between us reminded me that solidarity is important.  My small attempts to express my feelings had built a bridge between me and the woman.  A relationship such as this, based solely on respect, compassion, and love, can ease the pain for a moment or two.  The loss of my father at the age of twelve taught me that sometimes a moment or two, a pause in the pain, is just enough to keep us going. 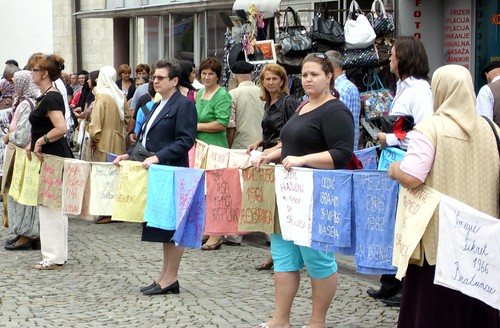 That is life here in Tuzla.  You might not always see it, but there are ghosts that follow around people.    Don’t get me wrong, everyone who has experienced a loss or trauma of any kind has a history that they must learn to manage throughout life.  I know these struggles intimately.  But a town of 40,000 refugees who fled ethnic cleansing and genocide carries a weight unique unto itself.  So if to je to, that is life, whether we like it or not, why not try and find some meaning in it all?  My small connections with the woman at the event, and with Zifa, have brought meaning to their and my own losses.  Author Milan Kundera says it best in my favorite book, The Unbearable Lightness of Being:

“The heaviest of burdens crushes us, we sink beneath it, it pins us to the ground.  But in love poetry of every age, the woman longs to be weighed down by the man’s body.  The heaviest of burdens is therefore simultaneously an image of life’s most intense fulfillment. The heavier the burden, the closer our lives come to the earth, the more real and truthful they become…”