When I was dropped off in Nablus nearly two months ago, I had no idea what to expect. I had talked with foreigners who had worked in Palestine, but only in Ramallah or Bethlehem.

I got out of the taxi with no idea where I was, waiting for Mohammed to come and pick me up. I was anxious but excited to start my summer working here.

Now I smile when I return to Nablus from a weekend in another city or walk past the spot where I was first dropped off. I smile because I now know that place as al-dawr (the city center) and because coming back here feels a little bit like coming home. 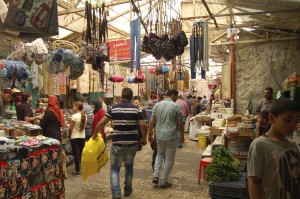 Shoppers in the Old City

Nablus is in the northern West Bank, and is the third largest city in Palestine, after Gaza City and Hebron. It’s also the fourth oldest city in the world, preceded by the Romans city of Flavia Neapolis and biblical city of Shechem at the same location.It’s a beautiful city, situated between two mountains, Mount Ebal to the north and Mount Gerizim to the south. Despite the heat and hills, one of my favorite things to do is walk around and discover new views of the city, nestled in this narrow valley.

The famous Arab explorer Ibn Battuta nicknamed the city “Little Damascus” in the tenth century. The part of the city he would have visited is now known as the Old City—a labyrinth of cobbled streets, vaulted pathways, and a busy souq (market). Today, Little Damascus is known for its knafeh, olive oil soap, and traditional Turkish baths. 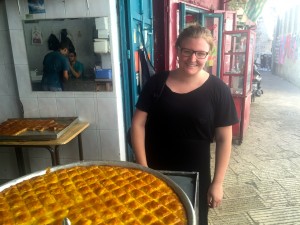 This isn’t actually knafeh, but I am outside of what I hear is the best knafeh in Nablus, which means it’s the best in the world!

The Old City is certainly something to see. At first, I tended not to wander too far on my own after one very long, hot, and confusing afternoon spent hopelessly lost in its alleys. I’ve since learned that as long as you’re going downhill you’ll find your way out eventually (and most likely you can get a young child to show you the way out with a few laughs along the way). And really, isn’t getting lost half the fun?

Just east of the city are two sites so closely together, the stark juxtaposition always strikes me. Along one side of the road is Jacob’s Well – a present-day Greek Orthodox Church and significant biblical site. On the other side of the street is the green dome of a mosque, mirroring the orange dome of the church. The mosque is located inside Balata Refugee Camp, the most densely populated refugee camp in the West Bank. Over 30,000 Palestinians live within 1 square kilometer of land; most of these residents were displaces from Jaffa and Haifa, now both within the state of Israel. 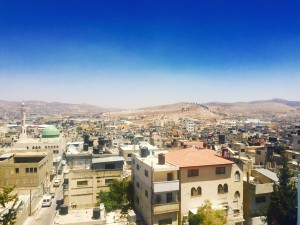 This is the view of Balata Refugee Camp from the roof of the Yafa Cultural Center. A friend of mine used to work there, and I had the chance to spend a day learning about some of their programs and about the camp itself. 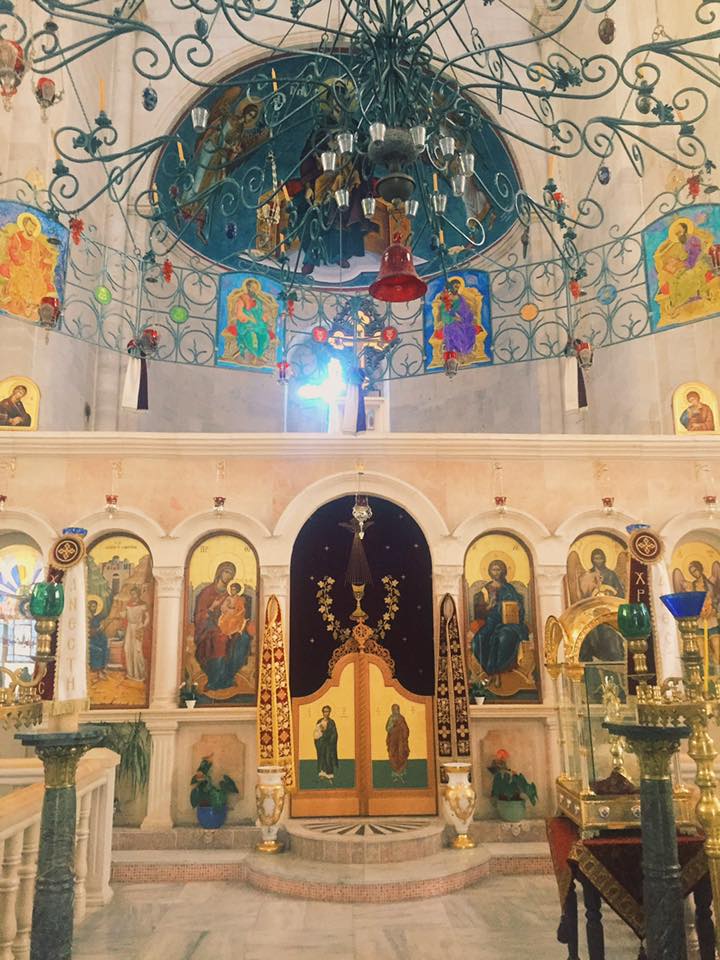 The inside of Jacob’s Well, a large church near the biblical site of Shechem.

Jacob’s Well draws a few pilgrims to the city, and some tourists come to sample the knafeh or visit the Old City, but Nablus is still removed from much of the tourism in Palestine. It is unlike the cosmopolitan Ramallah with cafes catered to the traveler crowd or Bethlehem with its shops selling goods from the Holy Land to thousands each year. That is not to say Nablus is somehow more authentic that these places, but to say that it’s different, and that it most definitely warrants a visit.