Below are just three of the many powerful, kind, and resilient women I met this weekend during the quilting workshops:

At 16, Puja was the youngest participant at the workshop, and easily the most outgoing one in the room. In her impressive English, she told me she had recently completed the arduous final exam all Nepali students must take in order to graduate high school. She was excited and nervous about getting the results back, which she described as her “golden ticket” to a brighter future.

On her quilt square, Puja had drawn a picture of her father being taken from their home to a distant army barrack. It was the last time anyone in her family ever saw him. Even though she couldn’t have been more than one or two years old when this happened, this scene was an inextricable part of her family’s story, as vividly stamped into her memory as if she had seen it herself. 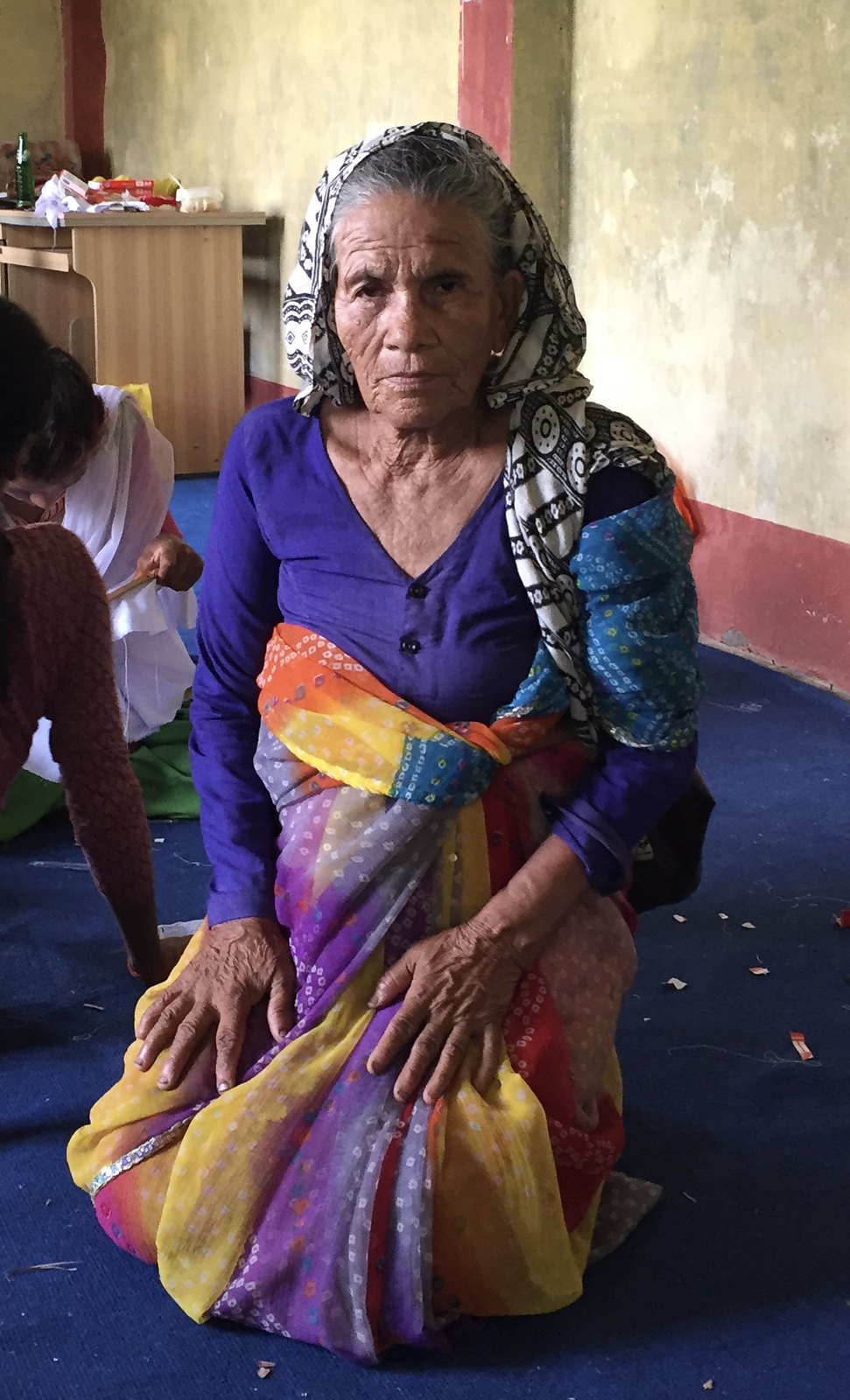 The first time I met Jagat, she marked the occasion by pulling two bananas out of her purse and insisting that Ram and I both take one. Once Ram had left us, she slipped a second banana into my hands, nodding conspiratorially. I think our friendship was sealed after that.

Jagat was one of the leaders of the Bardiya Conflict Victims Committee, and she immediately commanded the attention of the room where the women were working. She chatted with the participants, inspecting each woman’s craft. When she got near me, she simplified her critique to two words:

“Ramru – Good!” and “Naramru – no good!” She glanced at me with a grin, to see if I was following along with her lesson in Nepali.

Then Jagat suddenly became serious. Looking at me, she deliberately raised one, two, three fingers, then with a flick of her wrist she waved her hand away – gone. Two of Jagat’s sons were forcibly disappeared during the war, and one was permanently injured in the fighting. Without saying a single word, she conveyed the tragedy of her story, and the three reasons why she is so committed to the CVC’s struggle for truth and justice. 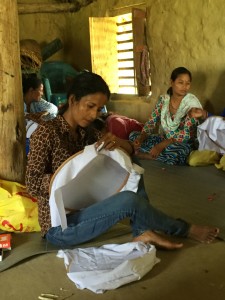 Without Sarita, the two quilting workshops in Bardiya could not have happened. Not only did she lead both sessions, but she also took charge of all of the logistics of the program – gathering cloth, thread, needles, hoops, and securing us a place to meet. Her enthusiasm for the project went a long way toward making the workshops engaging and meaningful for all of the participants.

In addition to being a phenomenal facilitator, Sarita made sure Ram and I felt at home in Bhurigaan. After the 18-hour bus ride, Sarita welcomed Ram and I into her house, giving us a place to take a quick nap and making us a hearty breakfast of rice and lentils. In the evening after the first workshop, we joined her at her mother’s teashop for sweet, milky tea and delicious fried pastries. 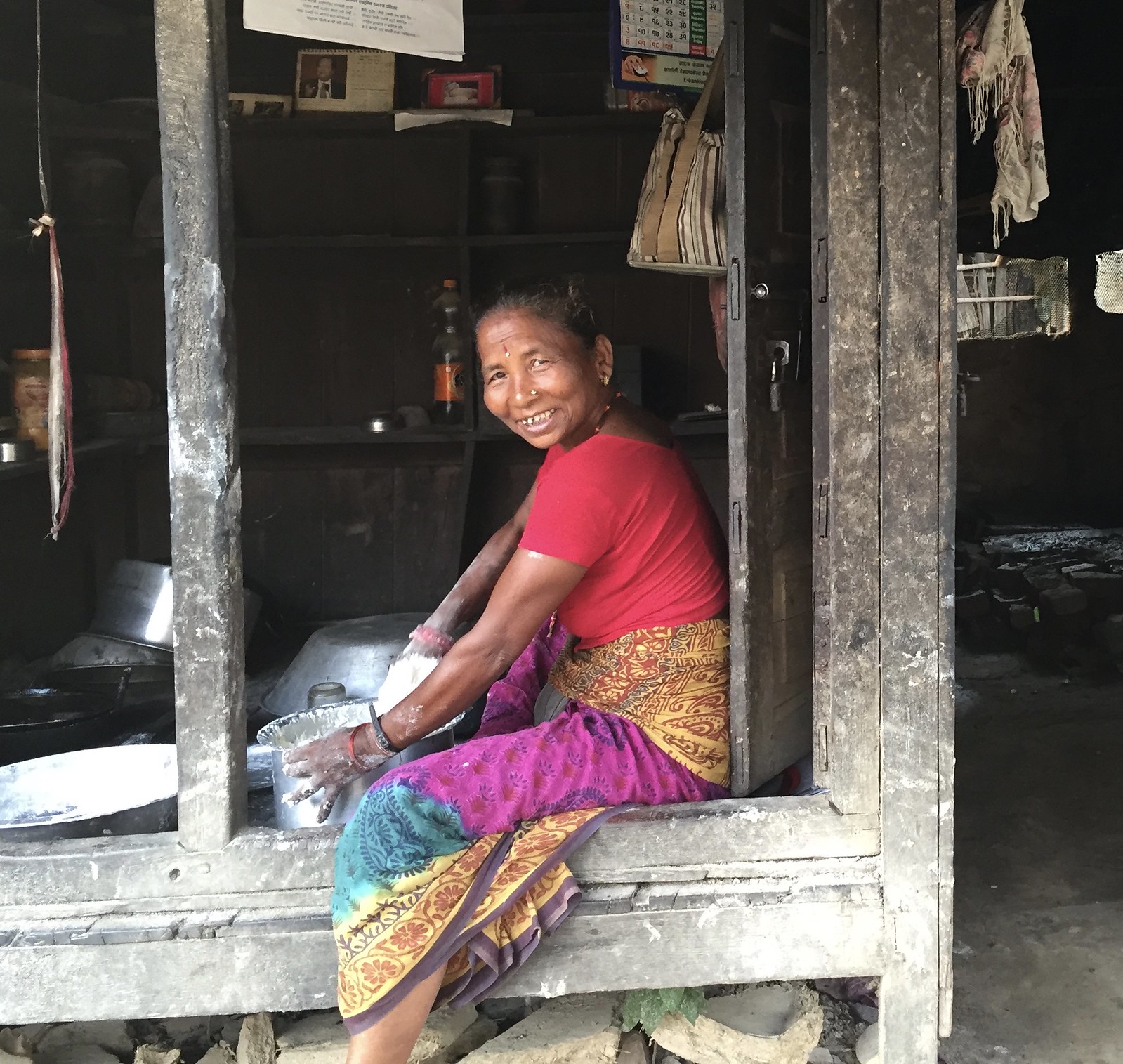 I knew from Ram that her father was forcibly disappeared during the conflict. It wasn’t until the second workshop that I learned that her mother had also been detained. I had asked Sarita about her quilt square, which showed a woman, blindfolded, flanked by two soldiers. She explained that for five days, she and her family didn’t know if her mother would be disappeared as well. When her mother was finally allowed to come home, they learned that she had been tortured. She still suffers from injuries inflicted during her imprisonment.

Using the corners of her quilt square to wipe away tears, she finished her story and went back to helping the women with their embroidery. I looked again at her drawing. Sarita had drawn her mother as bigger than the two soldiers holding her, and while you could only part of the soldiers’ faces, her mother was facing the viewer head-on. Despite the pain and fear in the scene, Sarita’s drawing also captured her mother’s resilience and strength. 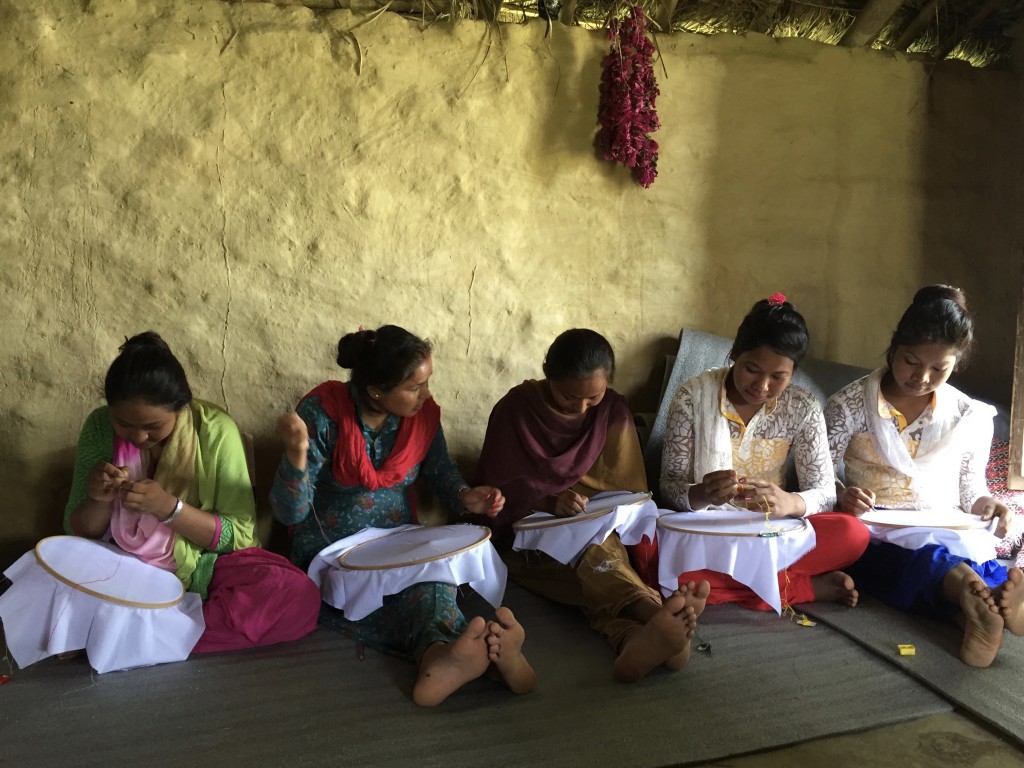 Every woman who attended the quilting workshop has a similar story of unresolved loss. Some stitched the names of their missing family members and the dates they were forcibly taken away. Others depicted their last memories of the disappeared – dramatic scenes in which grim-faced soldiers took their husbands, fathers, brothers away. But the workshops were characterized more by solidarity than by grief. The women used their time together to discuss the truth commissions, the interim relief program, and whether these went far enough to address the injustice of what they experience. They gossiped, cracked jokes, and swapped town secrets. They honored the memory of their missing loved ones together, one stitch at a time.