Episodic memory is a term used to describe personal memories that a human being associates with certain emotions, sensations, and personal associations of a place, time, or thing. As human beings we rely on memory to determine the present-day, our futures and to remember our pasts. We place importance on holidays, birthdays, and anniversaries because of our loyalty to remembering significant events within our lives and those of others.

July 16th was the anniversary of the Tarata Street bombings of 1992, which took place close to my neighborhood in Lima’s Miraflores district. Over twenty people were killed and many homes and businesses were damaged and destroyed by the Shining Path terrorist attack. The small touristy street is now completely repaired but in its place there stands a water fountain, intentionally built to the size of the crater that the some 1000 explosives left behind. The fountain has a small wooden bridge that allows the viewer to see the engraved plaque of the homage to the Tarata victims, which reads that “There is no path to peace, peace is the path.” 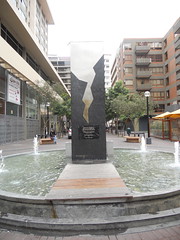 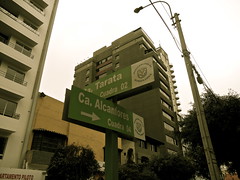 Amongst other memorials in Lima I’ve visited is “The Eye That Cries” or “El Ojo Que Llora”. It opened in 2005 as the first memorial piece dedicated to the 70,000 people who either died or were disappeared during Peru’s internal conflict. It is located in Lima’s district of Jesus Maria in its own gated off section of the Campo de Marte park. 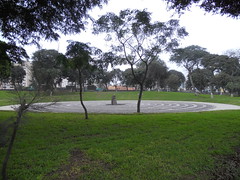 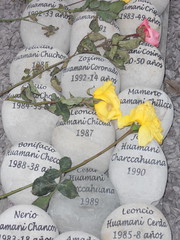 The sculpture is made of stone and surrounded by water that circulates through the cracks of what used to be the stone’s eye, trickling down as a constant tear. The trickle actually evokes tears from my own eyes, as it would if I felt moved by someone else’s sadness. It is surrounded by a labyrinth of smaller stones, many of which still contain the inscribed 27,000 names of those who died or were disappeared during the violence. It is a controversial memorial piece because it acknowledges the death and disappearances of everyone during the conflict.

Only three years ago, in September of 2007 the memorial piece was heavily vandalized with orange paint and partly destroyed by alleged Fujimori supporters. I could still see the orange paint within the crevices of the stone, representing the consistent ideological divisions and intolerance within Peru as a reminder to the ongoing unresolved issues pertaining to the conflict. I speculated that perhaps this was why the park, where “The Eye That Cries” stands, was so desolate that Sunday afternoon. 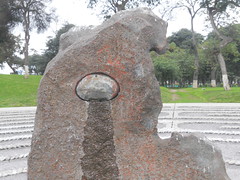 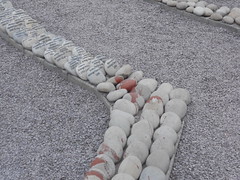 Behind the memorial piece, there is a brightly colored amusement park with a ferris wheel spinning mirthful children. At first, I was displeased with the close proximity of the ferris wheel to the memorial site, but in retrospect I realize that its presence brought about a profound acknowledgement of humanity as being capable of both atrocious and ingenuous acts. I also reflected on the new generations of Peruvian’s who may one day be told to return to the memorial site to visit what may still be the only grieving site for their disappeared family members.

The Peruvian Forensic Anthropology Team is currently working with the people whose lives are most impacted by these memorials to investigate, identify, and recover the human remains of Peru’s disappeared so that the memory of their disappeared family members may have its own sanctuary to remember.