Within most societies, menstruation is generally perceived as a ‘woman’s problem.’ Women are the ones who experience it and understand how it feels. They know how to control and manage it. In fact, many women don’t like to talk about menstruation and its associated symptoms, especially in front of men. They buy their menstrual products discretely; they hide these products in their sleeves or pockets when they are going to the bathroom and they dispose of them in such a way that nobody sees.

As a consequence of this, men often feel uncomfortable and unknowledgeable when asked about the question of menstruation. Many feel ill at ease even when in the vicinity of a conversation about the taboo topic. Because women don’t talk about menstruation, they often don’t understand what exactly it entails, how long it lasts and what is used to manage it.

When we were in Gutu, I experienced these reactions. Almost all men vacated the area upon hearing that we wanted to talk about menstruation with their wives and daughters. If they did remain nearby, they looked away and pretended not to listen, and not to understand. In fact, some even prevented their wives and daughters from talking to us about the issue.

This made my aim of finding a man who was willing to talk about Chhaupadi all the more challenging. In fact, it was only on our very last day in the village that we happened upon a family in which the father was vocal about the practice. This man was Sabra Raj Joshi, the proud father of three teenage girls. 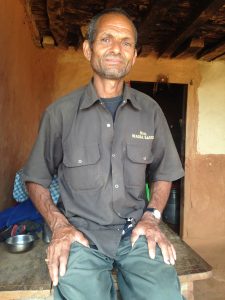 Sabra was a farmer on the outskirts of Gutu. His family owned six buffalo and a large plot of land. Overall, he was happy with his lot in life. He wasn’t even disappointed at having so many daughters, like many other Nepali families would be. Instead, he felt blessed to have a healthy and happy household.

When I started asking Harishma, Sabra’s daughter, about Chhaupadi, Sabra was keen to jump in and share his thoughts. He explained that the practice is linked to culture: “We need to do it. It’s part of who we are. We cannot go against it completely, because it’s been part of our traditions for generations. But that doesn’t mean that we need to keep girls outside in a Chhau Goth or a cow shed.”

Having spoken to quite a few families by this point, I couldn’t deny this. Cultural traditions and practices are extremely prevalent in regions such as Surkhet, in which modernities such as internet and media have not yet invaded. In a place where electricity is scarce and there is no running water, these ancestral traditions remain essential to a common understanding of reality. It seemed natural to me that Sabra wouldn’t want to break with them entirely.

So the compromise, Sabra told me, was to prevent his girls from staying in the Chhau goth during their menstruation, but to continue to impose certain menstrual restrictions. Bound by tradition on one hand, but practicality and safety on the other, this family had opted to keep their daughters inside during menstruation in a separate room dedicated specifically to menstruating girls.

This led me to consider what the practice of Chhaupadi really means. Does it mean sending your daughters to stay in the Chhau goth? Or does it include menstrual restrictions? In Sabra’s mind, his family did not practice Chhaupadi, because Chhaupadi was associated with a Chhau goth – but is this the case? After all, although Sabra’s daughters are safe inside their homes during menstruation, they are still isolated from others and forced to act differently during their periods.

Speaking to Sabra also led me to reflect on the significant role of men in relation to the question of menstruation. Many consider that Chhaupadi is a practice perpetuated by grandmothers and mothers. Whilst this is true, Nepali society is highly patriarchal. This means that if a father as thoughtful and caring as Sabra reflects on the issue of Chhaupadi then he can stop his daughters and wife from continuing the practice. It is therefore essential that men are also included in conversations about menstruation and menstrual practices.