Microprojects in the Country

This weekend Eric had a visitor from a partner organisation in Zimbabwe, who he was taking around some of CEDAC’s microprojects in the North of the country, and he asked me to come along to take pictures and write about it. We started out back at the youth centre in Kinaba, where we were able to watch a traditional drumming group practicing; this is one of the activities that CEDAC organises to bring together young people from all sides of Burundi’s divide. You can see in the clip that all the people involved are teenagers or younger; the two very young boys were children born in the bush. The performance was excellent, with even the little ones participating, and it highlighted the way in which Burundians are trying to emphasise their shared language and shared traditions in order to rise above the ethnic divide – an advantage they have over other ethnically divided countries, where the ethnicities are usually divided in both these respects, making it harder to assert a shared history. 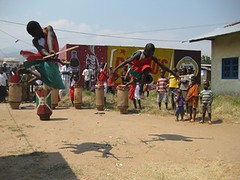 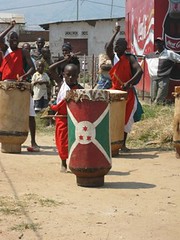 From Kinaba, we carried on into the interior. On the way, Eric points out some hills, telling me that during the war he fought in this area. It is the first time he has talked to me about the war. But our first stop is to visit one of CEDAC’s groups which received funding from the NGO PRASAB to buy two cows, which have now increased to three with a fourth on the way. I speak to Fides Nibaruta, a teacher and former combatant, who tells me that the group consists of twenty former combatants, so they hope to gradually increase their herd until they each have a cow, and possibly also buy some goats. She also introduces me to some of the other members, including Delphine Sindimwo who, I am told, was a renowned fighter with the FDD-CNDD. She tells me that the project has been helpful in combating poverty in the area, as well as promoting reconciliation as it has forced all sides to work together. Depressingly, although I, and Eric, have made clear that I am not a donor, all this is interspersed with requests for more cows. 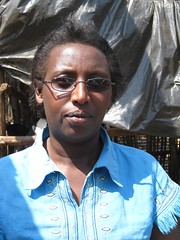 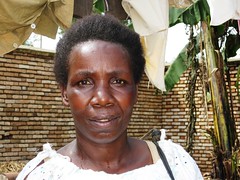 From there, we continue to a small town in Kiganda where a group of former combatants and women associate with rebel forces have joined together in a mutual aid society under the auspices of CEDAC. Here I am not able to talk to an individual, but talking through Eric, the members tell me there are fifty people in the group, and that they began by helping each other in times of difficulty and sickness, but that they were then able to save small sums each month, and, using local banking systems, build up enough savings to rent a building and buy stock, intending to run a small shop. It is clear that there is widespread poverty in the town, and indeed among the group members, and I am impressed at the initiative they have taken – and cannot help contrasting it with the previous project’s constant requests to be given more cows. They also tell me that each member of the group has voluntarily disarmed, and that they are working to promote disarmament in the community.

The next project we visit have planted Cedar seedlings and sweet potatoes. Interestingly, there is a government rally in town that day, and a man working on the patch asks me not to take photographs – Eric says that this has something to do with the rally, although I am not able to work out the connection. I also speak to Saruatar Ntegeye, who tells me that as well as the agricultural project, they have opened a small shop and bought a bicycle to help transport goods. Again, this was achieved through a mutual aid society, with no outside help except the organisational help provided by CEDAC. The group also works on disarmament; Eric takes us to see the local police chief, and asks if we can see the weapons that have been handed in; he brings us a box of grenades, cartridges and ‘chargeurs’ (no idea what the English for this is, but it means the cases full of rounds that you plug in to a Kalashnikov). I get another glimpse into Eric’s past when he picks up one of the ‘chargeurs’, examines it, and says that it has been buried, pointing out soil, bits of rust, and where it is bent at one of the edges. ‘You could use it, but it hasn’t been very well looked after’, he says, with a shake of his head, as he replaces it.

Finally, we head to Eric’s home colline, in Kiganda. Along the way, he points out houses that were destroyed in the war, some belonging to Tutsis and some Hutus; he tells us that the former residents now live in Bujumbura, but I suspect that many of them were killed. When we arrive, he introduces me to Ezechiel Bancirimisi, the founding secretary general of CEDAC, who tells me about a tile making project in the area. The group has 30 members, and they have several workshops and several kilns, with each kiln able to fire 3,000 tiles at once – enough for an average-sized house. The cost of each tile is 65 Francs, and they usually make enough tiles for six houses a year, giving the group an annual income of 1.17 million Francs (about $950); their work is limited as people do not build in the rainy season. The project is, however, not without problems; they need large amounts of wood for the kiln, and are struggling to secure supplies. I ask if they have considered planting trees for the future; he says that they are trying but it is difficult, as Burundi is heavily populated and the land is crowded. Looking at the hillside across the valley it is clear where the group has cut the trees, and equally clear that unless they can solve this problem the project will be doomed – and the cost may be deforestation and soil erosion. But Ezechiel is smart and dynamic, and I can’t not believe that he’ll find a solution.

As we head home, we are stopped by another communal CEDAC leader, who gives Eric a list of weapons handed in in the last two months; two guns, more than a hundred grenades, and hundreds of bullets. So far it looks like people are handing in bullets and grenades, but may be hanging on to the guns. But Eric is delighted; this is only the beginning. Then home – and out to the opening of Havana Club, Bujumbura’s premier nightclub, which just happens to be managed by Brian, who I live with. An interesting day out, and the opening was a great success, but an exhausting day!