Since we received the fund raised through our first Global Giving campaign, AEPD and I have been working to get the funding out to Mrs. Do, Mr. Xoan and their family. We’ve run into a number of roadblocks along the way. When I first made the trip out to see them, Mr. Thuan, the AEPD outreach worker responsible for the family, was out of town for a training seminar. Upon his return, he was able to work with Mr. Xoan and Mrs. Do to come up with a business plan to support their family and boost their income.

Once the paperwork was completed, we made plans to transfer the fund to purchase the buffalo. Unfortunately, Mrs. Do’s mother passed away that same week. We shared our deepest sympathies with the family and gave them time to recover. They reached out to us a few days ago after Mr. Xoan and Toan returned from their trip to a hospital in Hue. They spent the last two weeks there so Toan could receive replacement therapy for his hemophilia. I’m very happy to report that AEPD was able to complete the transfer and help Mr. Xoan bring a new buffalo home last week. 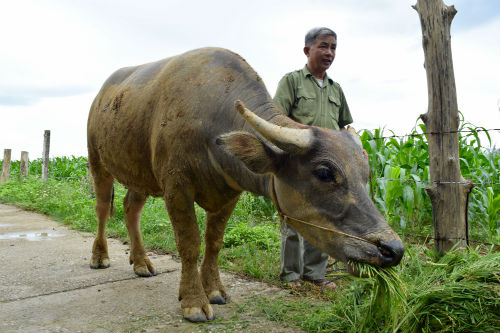 Mr. Xoan pictured here with their new buffalo. I’m told that her hooves look good, a sign of a healthy animal!

During the meeting that I attended this morning, Mr. Thuan was on hand to lay out a few stipulations for the donation being made. We want Mr. Xoan and his family to be as successful as possible in raising this buffalo and its calves in the future so that they are able to supplement their income. Therefore, in the next two years, Mr. Thuan will be checking up on the family, monitoring their progress and ensuring that they are holding up their end of the deal by taking good care of the buffalo. Two representatives of local support groups for Agent Orange victims were also at the meeting. 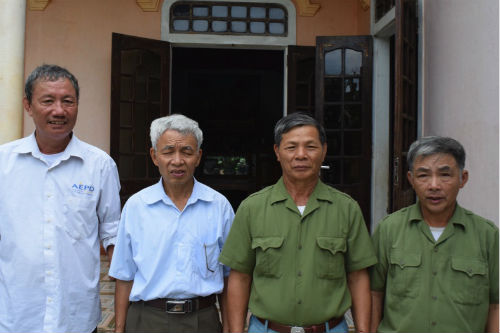 AEPD’s approach to helping Agent Orange victims is unique due to its focus on victim empowerment. The family is responsible for coming up with their own business plan that they are held accountable for. They’re in charge of carrying out this plan from start to finish. An outreach worker is present to advise and offer ideas, but beneficiaries always have the final say. AEPD also calls on local representatives to be present during these transactions to get the community involved in supporting the family. We will be returning to visit Mr. Xoan and his family once again in the next few months to see how they are doing. 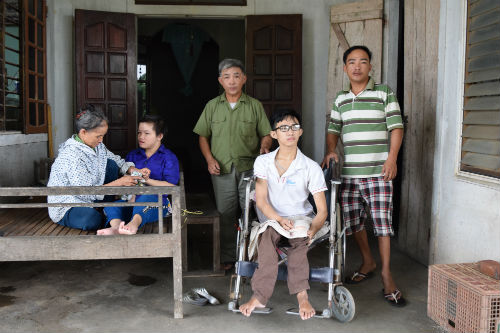 Until then, the Advocacy Project and its partner, AEPD, are working hard to support nine other families affected by Agent Orange. To read about one of these families, please click here.

I wanted to say thanks again to all of our amazingly generous donors. None of this would’ve been possible without your support.