Mr. Luu – outreach worker with all his heart

Hoang van Luu was born in 1964 during the “American war” in a farming village in Van Trach commune. When he was three years old, his parents died in a B- 52 bomb attack. Most of the villagers lost their lives under the hail of bombs this day, 18th of April 1967. It is remembered ever since as “the day of the village’s funeral”.  As if by a miracle, Luu, his older sister and two older brothers all survived the attack , hiding in one of the many underground tunnels and caves, which the villagers had dug for protection against the air raids. The four orphans were brought up by their grandparents.

In summer 1972, Luu’s eldest brother found a fist-sized bomblet and brought it home. It was one of hundreds of thousands unexploded cluster bomb sub-munitions, that had been scattered throughout the Vietnamese countryside during the nearly ten years of war. He didn’t know this by then. Neither did 7-year-old Luu who picked the bomblet up thinking it was a toy.

“I thought it was some kind of ball out of metal. So me and four other children from the neighborhood started playing with it. As I hit it several times on the stone floor of the hairdresser’s shop where we were playing, I heard a ‘clic’ and the bomb exploded in my hands”.

Startled by the explosion in the town center, neighbors and Luu’s uncle came running and found the five injured children and brought them to a near-by hospital. The bomb ripped off Luu’s hands. The doctor could only save two fingers of his left hand, his right arm had to be amputated at the height of the elbow.

After he had recovered physically from his injury, Luu went back to school. He had to convince his teacher, who was first reluctant to take back this boy without hands, thinking that he was not able to follow the class and learn writing with only two fingers. But he did well. The teacher’s hesitation made Luu understand that from now on he had to be better, and more intelligent than the others – the “normal people” – to compensate his physical disability and make something out of his life. To prove wrong all people who had doubt in his aptitude to do things, and to earn their recognition.

His brothers and sisters stopped attending school and worked to earn money and support Luu to go as far as possible with his education. They knew as well as he did, that this is the only way he could keep all possibilities open and to live an independent life in the future. “I owe them my deepest respect and love, for what they did for me and how they supported me. Instead of going to school or university, they worked hard. For me. They sacrificed themselves for me.”

Luu was a brilliant student. He finished high school without the slightest difficulties and passed his university exams to study Biology in Hue. But then everything changed. Because of love. He was in love with a girl from his hometown, while studying far away. They send each other letters nearly every week. It was difficult for them to keep in touch. The girl’s parents did not allow her to be with him and worse – to marry him. Because of his disability. The couple was very sad and discouraged. He had been in Hue for nearly two years when she saw no other solution than to take her life. She threw herself in front of a train. Luu left the university and went back to his hometown, devastated.

For the next 20 years, Luu went on with his life taking many different jobs. He raised ducks in the rice fields of his hometown, he was a cow trader, and then he went into construction work as day laborer.  He grew on each of these jobs, collected experiences, and he always came up for his own living. He lived his life independently.

He had never forgotten what he resolved himself as a young boy, to be like anybody else or better, despite his disability. He did all his tasks with diligence and put great effort in doing them as perfect as only possible.  “The other construction workers and employers respected me for what I was, even if I was different, and for what I did on the construction site. I was confident, I knew how to work.”

In 2001 he got married, and became father of a daughter and a son.  He had bought a piece of land and built his house where he wanted to live with his future family years before, without knowing who “the one” would be. But he was convinced that he would meet her, sooner or later. 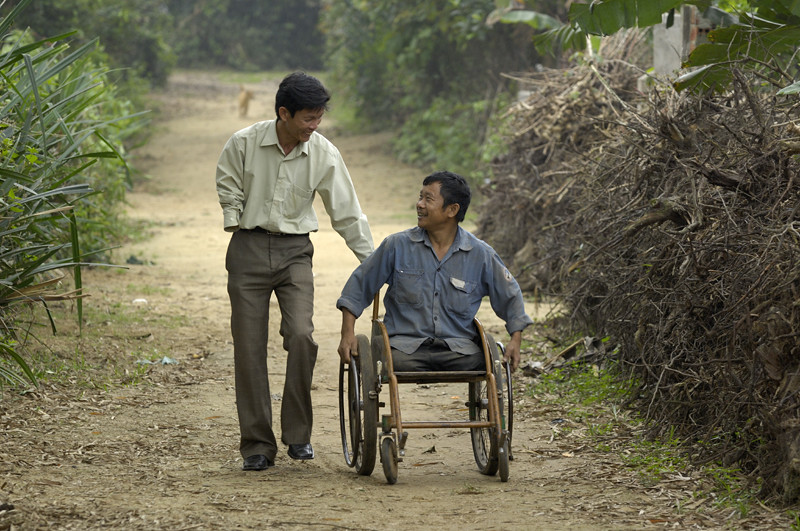 Then, in May 2003 he got a letter from the local authorities, inviting him for a job interview with the newly established international non-governmental organization LSN-V. They were looking for landmine and bomb survivors, who had made their lives and could share their experience with other survivors to help them to overcome their physical and mental trauma and make their lives meaningful again – the model of peer support. The job was made for him. He became the first LSN-V outreach worker and he has been working for LSN-V, now AEPD, for the last seven years.

“I met hundreds of people having the same situation as mine. I learned from them and I advise them, sharing with them my experience in life, which I’ve gone through. We have helped each other to overcome difficulties of disabled people and the feeling of complex and inferiority, and to do business to earn income for their families and join social activities. Many of the individuals I have assisted in the past, participated in social events with eagerness and enthusiasm. The work with AEPD has made me happy, confident and energetic. My colleagues trust me, ‘my survivors’ trust me. We overcome all our difficulties together and live as normal persons.”

Please watch the interview with Mr. Luu. He talks about his job as an AEPD outreach worker, and the impact AEPD has on the disabled people they intend to help.