I visited Ms. Toa’s family during my first field trip in early July. Ms. Toa met with Karen, an AP staff member, in January 2018. At the time, Ms. Toa’s family had been considered a potential beneficiary for the Agent Orange Campaign. Today, eight months later, the family’s situation has worsened and AEPD has identified them as next priority beneficiary family. 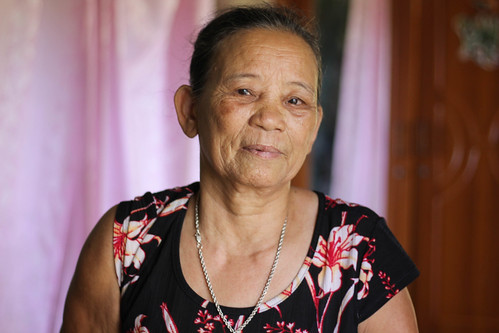 Ms. Vo Thi Toa (above) is a 71 year-old powerhouse. We sit in her two-bedroom home donated by the Vietnamese Association for Victims of Agent Orange in the Bang Village of the Bo Trach District, Quang Binh. She is the head of her household and her family’s primary caregiver. Speaking softly yet firmly, she looks to her late husband’s, Mr. Nguyen, portrait every few minutes throughout our conversation. There is discernible pain in her voice and we learn that Mr. Nguyen passed away in 2005 of stomach cancer. 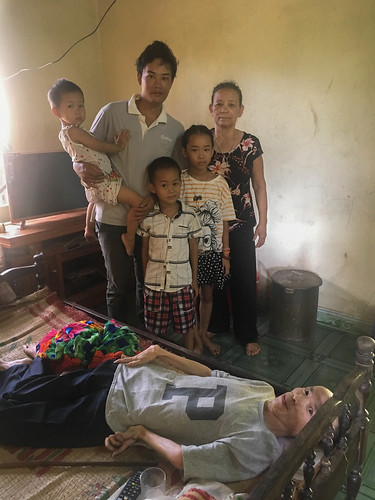 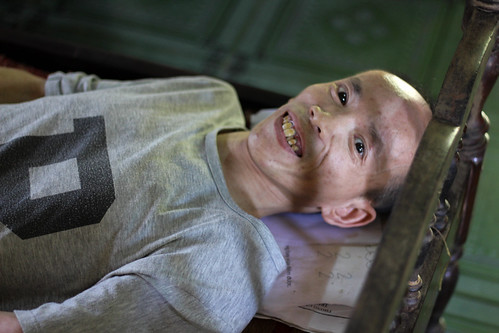 Nam (above) is the oldest son. He is the most severely affected by his father’s Agent Orange exposure. Nam has cerebral palsy and is quadriplegic. He receives Agent Orange compensation of 1.3M VND (~$55 USD) per month from the government. Nam spends the majority of his time lying on his bed. Ms. Toa carefully adjusts him every so often to prevent bedsores. She admits that caring for them is becoming more physically tolling.

Thang is married and lives with his family outside of Ms. Toa’s home. He suffers from peritonitis and cholecystitis and has had five surgeries so far. Thang receives 800,000 VND (~$35 USD) per month in Agent Orange compensation. Despite his physical ailments, Thang is doing considerably well thanks to his family’s support.

We spend most of the time discussing Long’s latest health challenges. He is sitting with us at the table but does not say a word. He has two daughters and one son, all of whom live with him and Ms. Toa. They climb over him, the sofa, and Ms. Toa as she speaks. 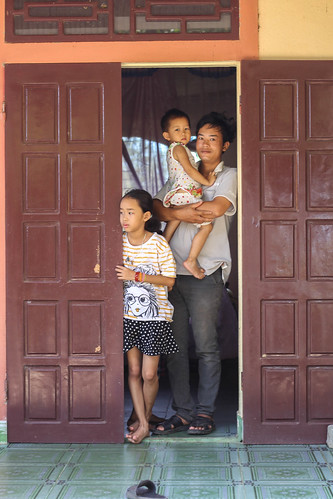 Long and his daughters stand in the doorway as we leave their home.

His wife works and lives in China but does not send them remittances. Ms. Toa explains that he has mental disabilities and epilepsy. The family went through all the procedures to get Agent Orange compensation for him in January 2018. Unfortunately, the state did not accept the application. They do not consider him an Agent Orange victim because his disabilities were revealed only a short time ago.

Long had his first epileptic episode in October 2016. Ms. Toa was forced to sell the cow that had been used to work in rice fields to pay for his six-month treatment in Hue. When Karen visited the family, Ms. Toa mentioned that their biggest expense with regard to his health condition was the cost of traveling. The medication Long was taking was covered by insurance. Fortunately, he is now able to receive treatment at the local clinic (meaning there are fewer traveling costs) but, and very unfortunately, the medication he had been taking is no longer effective. Long is now taking a new medication and it is not covered by insurance.

Ms. Toa bears the heavy burden of providing and caring for her family. She is keenly aware that they are all unable to work in the fields and is not currently engaged in any sustainable income generating activities (although she’d like to be). The family lives of the assistance from their neighbors and the state (i.e. Nam’s social allowance and her widow subsidy).

She has consulted with Mr. Tuan, an AEPD Outreach Worker, and would like to rear a cow. Having raised cows before, she is familiar and comfortable with the process. She feels cow rearing, more specifically, for calf and fertilizer sales, is the most sustainable form of livelihood for her family. The income generated will pay for Long’s medical treatment (traveling and new medicine), food, and other household needs. Without this business plan and the resources to implement it, Ms. Toa will continue to rely on the aid of her community and will not be able to generate a sustainable source of income for years to come. 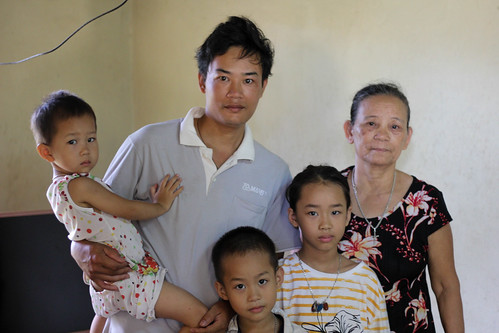 The Agent Orange Campaign model works to provide a sustainable source of income for the beneficiary families. An income they can rely on for years to come that is either independent of other income-generating activities or not. If you read through her profile (above), you likely noticed that she had a cow and sold it to support her son’s medical treatment.

Even though she had every right and reason to sell her cow, this detail may be disconcerting to friends of AP being asked to support her next cow-rearing activity. But it shouldn’t be. Ms. Toa has steadily and (in many ways) singlehandedly supported her family for the last two decades. What she chose to do with her previous cow was her decision, and her decision alone.

In this situation, however, Ms. Toa will be entering a partnership with AEPD and is bound to implement the business plan to its fullest extent for the next two years. The business plan helps implement the activity, ensures its longevity, and supports the beneficiary’s financial literacy and therefore longterm savings/investment. Mr. Tuan, the Outreach Worker, will check in with Ms. Toa periodically (as he does with all Campaign beneficiaries) on the successes and challenges associated with implementing the plan.

After the two years are over, Ms. Toa will be strongly encouraged to continue the cow-rearing model in the way that suits her best. For example, she may decide to sell the cow once it has produced as many calves as possible and keep a female calf. (See here for more information on the cow-rearing model.) However, because it is a partnership, she will always be required to obtain AEPD’s permission if she decides to sell the original cow for any reason. Thus, the partnership is an important part of the model as it holds the beneficiary, AEPD, and AP accountable.

Based on my observations and conversations, Ms. Toa is fully committed to the plan and to investing in her family’s future.