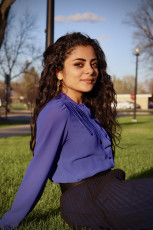 Avyan Mejdeen is currently heading into her senior year at Concordia College in Moorhead. She is majoring in political science and global studies with a concentration in international affairs and a minor in interfaith studies. After undergrad, she looks forward to spending a year abroad with a human rights organization or governmental agency as part of her gap year before heading to law school. Avyan wants to specialize in international human rights and civil rights law. Before pursuing the legal profession Avyan was committed to becoming a physician. Her experiences, which included a forced marriage changed her outlook and passion towards the career she wanted to pursue. She is dedicated to helping victims of international domestic violence and forced marriage, especially when it comes to child marriage. Her traumatic experience turned out to be a blessing because it not only allowed her to broaden her scope on life but also to make an impact in the field where many legal professionals were not readily available to help her at the time. Joining The Advocacy Project for Avyan meant she could gain experience in helping individuals when it came to human rights issues/violations. The experiences that The Advocacy Project offers are crucial to expanding knowledge and skills in this field, as well as getting Avyan prepared for a career as an international human rights attorney and advocate.

Disclaimer: This is my experience and is independent of the “norms” in Kurdistan. This experience is not common in my region or among the Kurdish people. Also, my religion (Islam) was not a motivating factor for this experience. Rather, Islam strictly forbids forced marriages.

On August 15th, 2019, I was entered into a forced marriage through manipulation and coercion in a country that was foreign to me. Unknown to me, this was all planned months before I arrived in Kurdistan, Iraq. I had been told that it was dire that I visit my sick grandmother in Kurdistan, which is why I left. Of course, I found it strange knowing that my college would resume in just two and half weeks, but I went anyway because growing up in my culture, I was taught to trust my relatives and family members no matter the circumstance. Kurdish people see opposing your parents as not only disrespectful, but it could also be grounds for disownment by your family and community. Knowing this, I followed along.

When I arrived in Kurdistan, I was immediately dropped off at a 30-year-old man’s house. He was a stranger to me. I was confused as to why I was going to stay with him until he told me to go on a walk where he explained that he wanted to marry me, and if it weren’t him, it would have been someone else in Kurdistan.

I refused the proposal, but as the weeks went by, I realized that I really didn’t have a choice. My parents and relatives in Kurdistan had made a pact to get me married before leaving Kurdistan. I wasn’t allowed to meet with my “liberal” friends for an extended period of time. My family knew that they were the only ones who would help me out of this detrimental situation.

Though not common, my friends and I had seen other girls in similar situations who weren’t allowed to go back home if they didn’t agree or, even worse, beaten to death if they risked ruining their families’ reputations. I knew that if my family went as far as to lie to me about why I needed to come to Kurdistan, they would not hold back from taking my passport.

I needed a way out, so I decided to agree to an engagement, but not a marriage. I planned to agree to the engagement until I came back to the States, where I had the help of my friends, mentors, and professors to break free from the situation. I was lied to again and taken to a courthouse. At the time I did not know this was a courthouse. As a teenager with no knowledge about marriage in the Middle East or how to read Arabic, I could not comprehend what was happening at the courthouse.

Once I got back to Minnesota, I found out that I had been married against my will. I refused to accept that I was married and what my family had done to me. I sought out a divorce, which was granted to me two months ago.

Even though what was done to me was heart-rending, I chose to forgive my family. I decided to forgive them for myself and my religion which allowed me to find the peace I needed to move on. I needed to close this chapter of my life knowing I would not be given the apology I wanted and needed at the time. In my family’s defense, they were afraid that I would be left alone to care for my five younger siblings if they were to pass away since I am the oldest child in my family. This peace I found in forgiving helped shape me into the Kurdish American Muslim woman I am today and pushed me to pursue a career in international human rights law.

I wanted to share my very traumatic story not to be pitied but to raise awareness about forced marriage and the many struggles and sacrifices women and young girls in particular circumstances and cultures make every day. I want other women and young girls who have gone through similar experiences to know that they are not alone and are supported by many like myself.