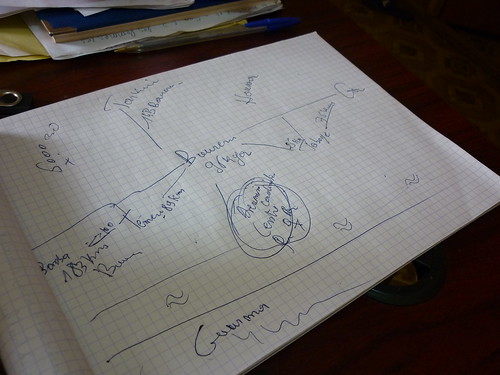 I am struggling to keep sane and deal with the numerous tech-related issues that this Friday night decided to offer, but I’m also determined to write post #4 today. I’m sitting in Broadway Café (Badalabougou branch, there’s two!), where a power generator is delighting us with electricity, while the rest of the quartier seems to have delved into darkness. Nay, more than electricity: wifi, air conditioning and cold drinks. In short, bliss. For however long it might last.

The last week has been a whirlwind. The team at Sini Sanuman are getting to know me, and I them, very quickly. Emotions, illnesses and various personal issues arose while in the office, and it’s good to know my host have my back. They are wonderful, really. Our project with “the Germans”(i.e. zivik Institut für Auslandsbeziehungen ) is supposed to start in 1-2-3 THREE days, but funds are late. We’ve been doing all the preliminary work to make sure to be ready to start as soon as possible, searching for suitable locations for a centre in Bamako, recruiting new staff for the portion of the project in Gao (Bourem), and altogether working out the details.

Our director asked the bank for an advance to start as soon as possible. While the wait for the funds is difficult, the news were accompanied by the decision by UNICEF Mali to partner with Sini Sanuman once again and offer their support for the project in Bourem.

Sini Sanuman, as I’ve written before, has been at the forefront of the fight against the practice of excision in Mali, operating primarily in the capital, Bamako. This is the first time the NGO will be travelling to the north of the country and setting up an office and programme there.

The region of Gao is located around 1000 kilometres north-east of Bamako, and was one of the worst hit by the rebellion. Activities will take place in Bourem and its district, located around 100 kilometres away from the region’s capital, Gao. The programme there, much like the one in Bamako, is aimed at identifying victims of sexual violence during conflict and helping them recover through psychosocial and income-generating activities. UNICEF will allow Sini Sanuman to expand their reach from urban Bourem to its five different communes.

The difficulties facing the portion of the project in the north are deeper than in Bamako. To this day security in the region is shaky, which is why I won’t be able to travel there anytime soon and why we are staying away from using government-owned property, as those are more likely to be targeted. The north, as my colleague Alpha would also suggest, is a different ball game. Security issues aside, Sini Sanuman is testing new territory. Identifying victims might prove to be more complex and the instability might play into that. Sini Sanuman is sending a team of 5 to manage and implement the zivik and UNICEF projects, and what I feel is one of my biggest tasks these days is to make sure they are ready and don’t become overwhelmed by the demands of “the Germans” and the United Nations.

Back to the office tomorrow morning, working on a UNICEF proposal over the week-end. It’s time for me to post this and go back to my dark room just across the street from this Broadway bliss. Until next time, world!