The temperature was hot. It was around 32 degrees Celsius when I landed in Nepalganj. Many people were lining up in the backyard of a blue building which is the airport. The airport is small and simple. The airport crew handed out our baggage to be claimed. There was an hour delay, I wasn’t sure about the reason, someone sat beside me explained that domestic flights always be late.

It was my second day in Nepal. Before, I stayed a night at Thamel district after my long flight from Oslo through Moscow and Delhi.

Sangita from BASE picked me at Nepalganj airport. After lunch, we headed to the bus terminal. She stopped a cycle rickshaw. I and Sangita with two big bags sat on the rickshaw drawn by a thin man. I felt terrible.

I used to travel with ‘becak’ in Indonesia, so it wasn’t a big surprise for me to ride the rickshaw. 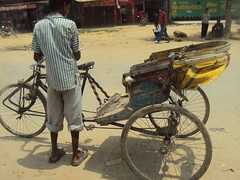 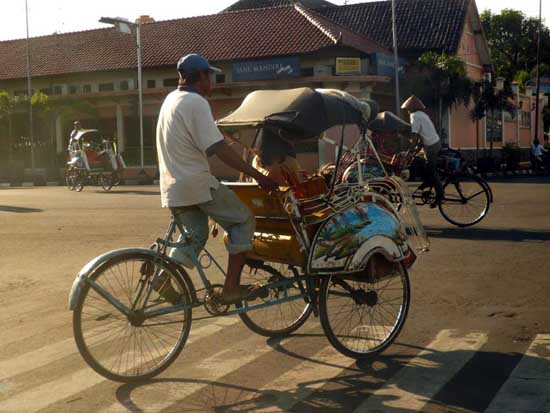 But wait, this rickshaw is operated on the main road, competing with buses, trucks, cars, etc. It made me a bit (or more) worried at that time. When the rickshaw were passing through big buses or trucks which generously honking their horn, I (literally) closed my eyes.

It took about 5 hours to reach Tulsipur from Nepalganj with an overload micro buss. Whenever the bus was stopping, many sellers came by. Many of them were children, they offered fruits, ice cream, drinks, etc. It was Friday afternoon, I hope that they have finished their classes at the school before selling those things. I saw a young couple entering the buss. I didn’t really notice them at the first place. But, because the girl wore a beautiful blinking red dress, quite similar to the dress of Indian bride that I saw from the movies, they took my attention. Sangita told me that they just got married and the husband took the wife to his house. Hmm, interesting!

I didn’t really believe it until I witnessed it myself.

My Nepalese friends in Oslo mentioned that Nepal has problem with power shortage. They said, it will only be available for some hours per day. I thought it happen just in particular areas in Nepal. But, I was wrong.

I wasn’t really affected by the blackouts in Kathmandu, I think because the hostel put on their generator. Upon my arrival in Tulsipur, the electricity was off. They have schedule for the blackouts. Fortunately, since my second day here,  we have longer time of electricity than on the schedule. Power shortage for this whole country is a big challenge.