On this Eleventh Day

Today marks the tenth anniversary of the terrorist attacks that brought down the World Trade Towers in lower Manhattan, that caused the collapse of the Pentagon’s wall outside of Washington, D.C., and that led to the crash of flight 192 in Shanksville, Pennsylvania – killing nearly 3,000 people.  I can hardly believe that it’s been a decade since then, a day which I, and everyone else alive to hear about or see the attacks, will never be able to shake.  We all have those “where I was when I found out the planes hit the buildings” stories: I was in my sophomore year of high school and in my music theory class when, just after 9 AM, we turned on the TV to see the second plane hit the tower.  Because I lived in a town just across the river in New Jersey, one that had many residents working in lower Manhattan, each time a student was called to the administration’s office over the loudspeaker the school shuddered with a moment of dread.

That evening and early the next morning, we could smell the towers burning – the eerie cloud of smoke passed through each town and permeated our noses and memories.  These are collective memories I share with the people who were there that day, but I recognize my luck because I did not lose anyone on September 11th.  Still, while the point of a memorial is certainly to honor individuals lost, it is also to provide an outlet for collective grief and reflection.  This year, I won’t be able to join friends and family in remembering the attack that changed everything about the United States and, to some extent, the world.  Earlier this summer though, I did attend another memorial commemorating a group killed in a far away country when I was only seven years old living in Rumson, New Jersey.  The Srebrenica genocide memorial and burial ceremony is held every July 11 to remember when thousands of men and boys were killed after the safe zone Srebrenica fell to General Mladic’s paramilitary units, and to bury those newly identified bodies pieced together by forensic anthropologists after mass grave exhumations. 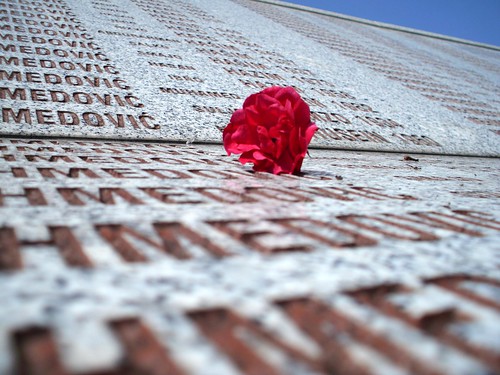 This year there were over 40,000 people in attendance – many from Bosnia and its Diaspora, but also many from the international community.  Now, I admit that I have some qualms with the way the town swells to the tens of thousands while the next day it is empty as ever.  I think that we are doing a huge disservice to Srebrenica by seeing it singularly in the light of the genocide, but more on that will come in later blogs.

The most important thing I saw and I felt during July 11 this year was a collective sense of pain that every mother, daughter, or wife who has lost a male loved one can relate to regardless of ethnicity, race, religion, or country of origin.  My home town lost five residents in the 9/11 attacks, including one of my own neighbors.  That day the family lost their husband and father.  On July 11 I could see how women burying their husbands braced themselves for the shock of putting the bones into the ground and saying goodbye one last time.  Their pain was written on their tear-streaked faces, in their hunched-over bodies, in their deep, throaty, primal cries.  The atmosphere was so heavily saturated with desperate anger and sadness that no one there could remain emotionally untouched.

When I was twelve my mother and I buried my father.  He spent nine months fighting cancer, but just couldn’t hang on anymore.  When we parted with his body after the funeral service, my mother’s face filled with something that I will never forget.  It wasn’t just emotion but the very embodiment of loss.  The heaviest burden is to bury someone you love, most of all someone lost before their time because of violence.  Violence in the tumors racking your body and transforming it into a prison, violence in hijacking a plane to crash it into New York City landmarks, or violence in executing thousands of men and boys on local football fields or in factories.

My mother’s face, the faces of the women in Srebrenica on July 11, and I’m sure the faces of 9/11 victims’ families all share an uncanny similarity, which is that loss burdens us with a heaviness we must carry for the rest of our lives.  I’m not sure if there’s much we can do in our everyday lives to make such things better – I’m a true believe that time transforms the sharp pain into a duller one, and that pain finds a way to fit in with the other elements of your daily existence.  However on anniversaries that are as pregnant with meaning as this one for my own country, or yearly burying newly identified bodies from mass graves in Srebrenica, collective mourning helps us to process what happened and consider what we lost as individuals and as a whole during such events.

As I take my own moment this September 11th to mourn the loss of American citizens and the violence since that has been committed in their names, I will undoubtedly pause to also consider the loss that permeates my current town of residence, Srebrenica.  For in the end, a mother’s loss is the same in Bosnia, the United States, Sri Lanka, and South Africa.  Observing 9/11 in Bosnia exactly two months after burying 613 genocide victims means recognizing that every country, every community, every person faces loss and the best thing we can do to cope is brace ourselves and support the others around us, whoever they may be, in taking our next steps together.