OneVoice Meets Many at KCE

Giggles of excitement filled the room moments after the recorder instrument lesson started. After a consistent chorus of toots, squeaks and laughs, the girls were finally able to play a simple melody. “Now we can sing with it!” Class 4 student Naanyu exclaimed joyfully after playing a note on her recorder.

KCE girls sing and dance together any chance they can get. This inclination toward music became even more apparent last week when the DC-based non-profit OneVoice visited the Enoosaen community. OneVoice aims to encourage peace and to connect and empower children worldwide through music, singing and art. The organization has worked with schools in Tanzania and Uganda, and now has come to our school in Kenya as well.

KCE girls thirst for outlets for their musical creativity and artistic expression. They never seem to get enough of it! Perfectly suited to this love of art and music, this past week, four guitarists, two singers, and one visual artist came to KCE prepared to musically invigorate the girls.

When KCE girls sing together their soprano voices unite to form one striking sound. The entire school immediately grew fond of the quirky and fun OneVoice team after learning and singing several songs and strumming on the musicians’ guitars. While most of the girls were thrilled and wanted guitar lessons, some were quite amazed by their newfound ability to play, sing and dance to the new tunes. 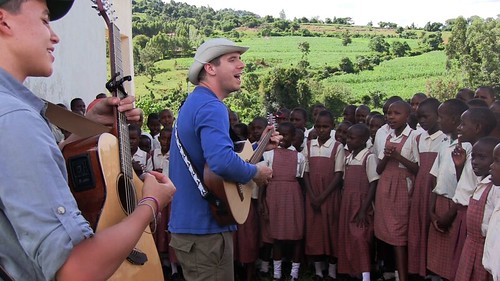 In the singing workshops the girls learned several new songs, some of which incorporated dance moves, like the hokey pokey. The girls quickly caught on and even shared a few traditional Maasai songs and dances with OneVoice. The OneVoice team didn’t hesitate to jump in and dance alongside the girls. 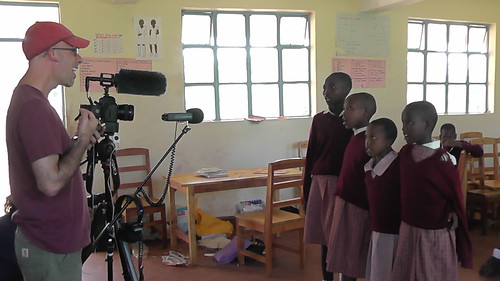 Simultaneously, the other classrooms were filled with girls using paint for the first time. The girls had never seen such vibrant colors before: royal blue, forest green, teal and neon red, just to name a few. They were hardly able to keep themselves from dipping into the paint before instructions were given. I assisted the art instructor, Jolene Hemeon, in teaching this half of the girls about color schemes and artistic techniques. 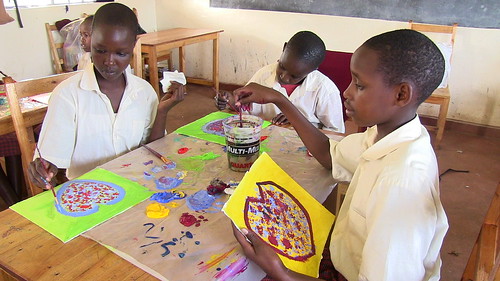 We started off by asking the girls to write down their dreams and their “heart’s desire”. Each of the girls designed a heart with their biggest desire imprinted on it. The finished pieces are to be exhibited in Washington, DC in December 2012. The exhibition will be used to fundraise money for Kenyan children suffering from heart disease. The idea is to raise funds through a tangible and creative “heart to heart”.

Class 7 student, Elizabeth Yiamat, wrote, “My hearts desire is to travel to another country, to help the needy, to build more hospitals and to have a good life in the future.” As I went around the classroom passing out paint, I noticed that most girls wrote that their dreams were to become doctors, lawyers, and teachers, as well as help to their families and their communities. I wondered if perhaps after this workshop some girls would want to pursue music, the arts, or dance. Although the arts are present within the school curriculum, they often aren’t considered to be a viable career path for young people.  The girls tend to aspire to career paths that are more widely spoken of, or looked up to, such as medicine. Yet music holds an important role in these young girls lives and is often an inspirational tool for communication, particularly communication about taboo issues. What better way to give voice to the voiceless than through song and dance? This past weekend allowed KCE girls to not only find their voices, but also to raise them together.