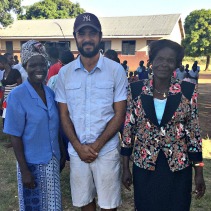 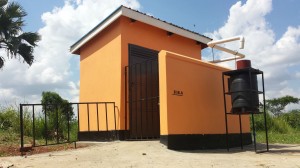 The build-up to Opening Day was immensely stressful. The school was frantically trying to get a hold of the budget because although we had contributed to funding the festival, the majority of expenses were not covered. The Parent-Teacher Association and other members of the community pulled together more than $300 in addition to our $200 contribution to make sure the event was a huge success. 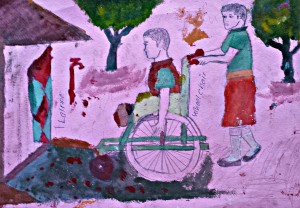 The school invited church leaders, the head teacher from neighboring Bwobo Manam Primary School, parents, members of the school management committee, and government officials from the lowest levels to the highest public office official in the Gulu District. Some members of the local press were also in attendance, including a local radio station, Mega FM, and Kampala-based News Vision. In total about 1,000 people showed up for the festivities. 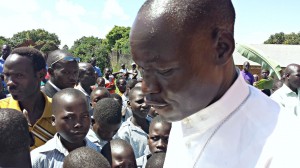 We started off the day with prayers and some speeches by the Lacor community’s pastor, Father Justin Luum. He gave blessings to everyone in attendance and led the mass before we went outside the school church for the next activity in the program. 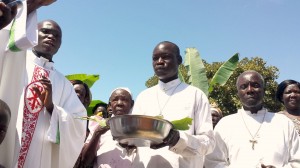 Christine, the head teacher, and her deputy, Brian, did a walk-through of the school with the guests of honor. They not only showed the guests the new toilet, but also the construction of 8 new ramps and entrances for the classrooms. Motivation, a UK-based donor, was so impressed by the project that they choose to invest $3,000 for accessibility improvements at Tochi out of 5 schools under consideration. 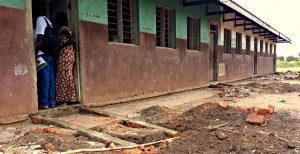 Construction of 8 Ramps for Classrooms at Tochi Primary School 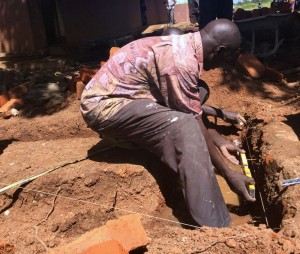 John, the Construction Contractor, Preparing a Ramp’s Foundation for Alignment

Overall, it was a marvelous festival. The project galvanized the community, and one by one, as community leaders and government officials came up to express their gratitude for the project, each of them made public commitments emphasizing their support for maintaining the facility and ensuring it was not vandalized or otherwise disrespected. 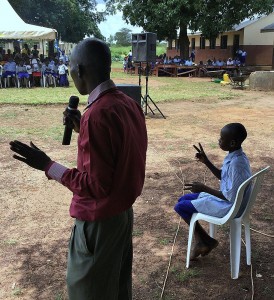 The local budget ombudsman, one of the lower level government officials in attendance, promised to use his power to ensure Tochi’s administration was emphasized in next year’s budget. He praised Tochi for being the leading school in the community on cleanliness and said that other schools should look at Tochi as the gold standard. 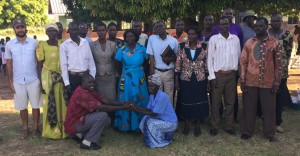 A Group Photo of Tochi Staff and the GDPU Team, Mr. Tadeo Walter is Kneeling on the Left-Center of the Picture

Other speakers, such as the Gulu District School Inspector, Mr. Tadeo Walter, and members of the school administration and school management committee expressed their gratitude and pledged to ensure the toilet was maintained by establishing a special maintenance fund for restocking cleaning supplies and draining the toilet when the time comes to empty the septic tank. 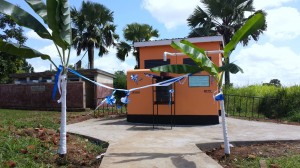 The Tochi Toilet on Opening Day

Next the head teacher from neighboring Bwobo Manam Primary School, Ms. Okidi Lydia came up to speak about how impressed she was and that she hoped more projects like this would come to the area. She joked however that if her students had such a nice toilet, they might sit inside all day rather than attend class. 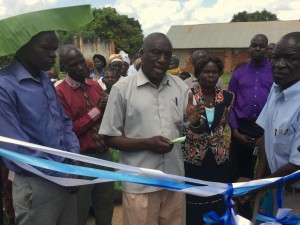 The last speaker was a very special guest of honor, Mr. Okumu Luriu, the Local Council Chairman for Ongako Sub-County of Gulu District. He spoke of how special it was to receive such a high quality sanitation facility. He cited a nearby village saying the people there had no public toilet and that many of the poorer members of the community, who could not afford their own private toilet, resorted to open defecation, a practice which spreads disease. 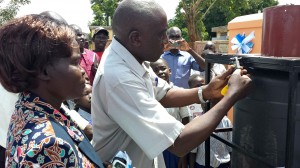 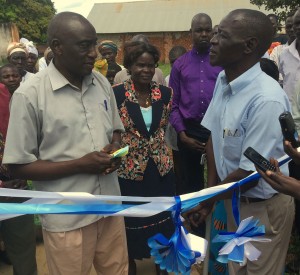 Mr. Okumu Luriu also warned against vandalism of the new facility with an analogy from his childhood. He recalled receiving new desks and chairs at his school before the war from a generous donor. He said that he knew some kids from class who would sneak into the school after hours and defecate on the desks and chairs. However, he told of how such disrespect has consequences. His forewarning was emphasized when he told the audience of how those people died during the war. His lesson: respect the things given to you by well-wishers or karma will come back to get you. 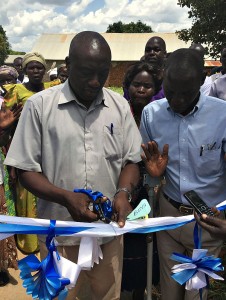 However, perhaps the most impressive person at the event, at least in my opinion, was a young boy in the P-5 class at Tochi. His name is Olal Santo. Both of Santo’s parents are deaf and this student was translating everything for them into the local sign language. He had his own chair next to the table where speakers came up and he had a front row seat during the ribbon cutting ceremony which officially handed over the keys for the new facility to the school. 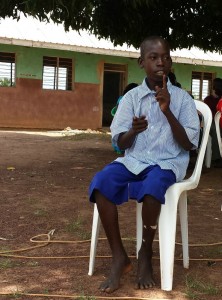 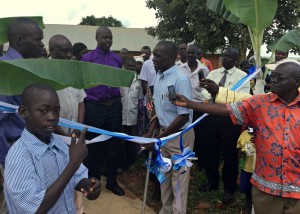 After the speakers and the ribbon cutting ceremony, students presented poems on what good hygiene means and presented a drama on the story of Ivan Olanya, the student with a disability whose story helped raise money for the toilet’s construction. Then GDPU announced that seven high performing students at Tochi would have their school fees paid for next term. We also presented an assortment of gifts, such as pens, pencils, notebooks, and mathematical sets to be used for the students’ upcoming exams.

Students from the P-5 Class Presenting their Poem 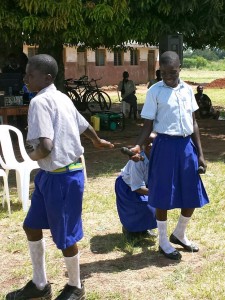 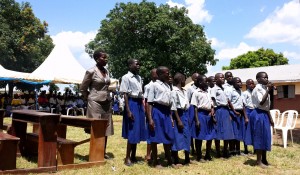 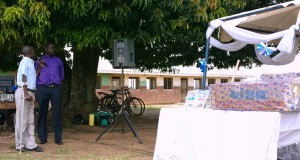 The chairman of GDPU spoke briefly about the organization’s mission and how important the issue of accessibility is. He concluded by presenting the cleaning supplies we bought for Tochi to use in maintaining the facility, but referred to Mr. Okumu’s statement that it was now the school’s responsibility to keep these supplies stocked and use them properly. Lastly, the chairman announced a special gift for the teachers and one by one, they were called up to receive a button-down shirt and get their picture taken with Mr. Okumu Luriu. 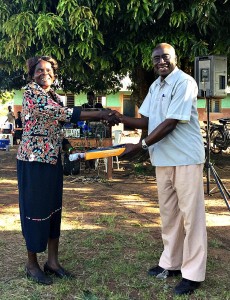 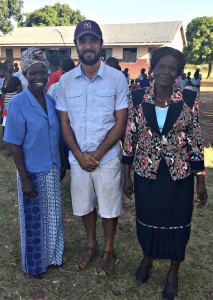 I felt incredibly proud of how this one project brought together a community. It helped organize GDPU around the issue of accessibility, and it made an immediately tangible impact on the lives of 16 students at Tochi who live with disabilities. Also, given how many people with disabilities do not attend school because of how challenging it is to access an education, as so many of the speakers emphasized, it is likely that these 16 students are just the beginning. 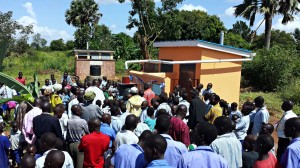 Opening Of the Tochi Toilet

Once the word spreads throughout the community that there is a school nearby which is completely disability-accessible, students living with a disability will flock there knowing that they will not struggle to enter classrooms or use the toilet. 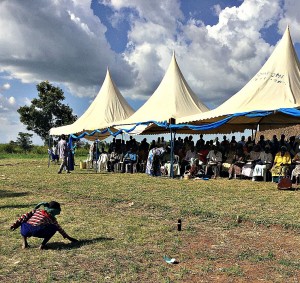 In fact, what is even more impressive is that the school became more inclusive as a result of this project. On their own accord, students and teachers played games at the festival which helped students relate to what it is like to have a disability in a light-hearted way. Teachers placed a bottle of soda in the field and blindfolded students who had to walk ten paces away from the bottle before turning around and trying to find the soda without the sense of sight. 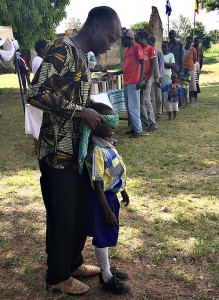 When I asked Simon, the man I’ve trained to continue this project after I leave, what he thought about it all he told me that, on Opening Day, we were celebrating the achievement of our goal to bring education to children with disabilities. He said we created an “inclusive educational program by building an accessible environment and this leads to reduced illiteracy among children with disabilities“.

If I had to summarize what we all felt and put it in a word, I would say “Success”. 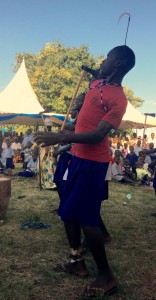