Originally published on the AIC website. During AIC’s Culture is Resistance Week, five Palestinian actors discuss the role of theatre in resisting Israel’s oppression, and how they chose this path of national and personal liberation. 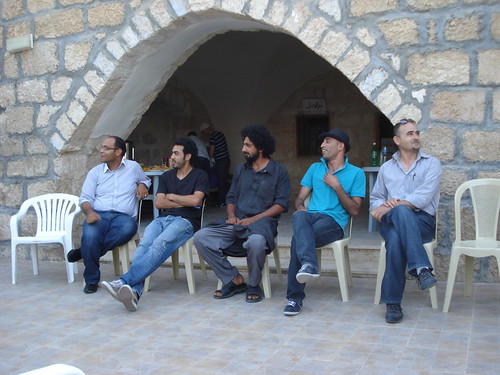 Mustafa, a Palestinian filmmaker, sits flanked by two actors from Jenin’s Freedom Theatre. They lean comfortably into their chairs, their arms draped casually across each other’s shoulders.

“We don’t see any other meaning of theatre,” Mustafa begins in response to the question of theatre as resistance. “It’s all based on resistance. For us it’s a need, an absolute need. There is nothing for the children to do. No school, no education. Our culture is targeted by the Israeli occupation.”

On 6 July, during the second evening of the AIC Culture is Resistance! Week, individuals from the Freedom Theatre in Jenin Refugee Camp and the Yes Theatre in Hebron met with internationals and Palestinians to discuss the importance of theatre as a form of resistance.

Founded by Arna Mer Khamis during the First Intifada, the Freedom Theatre has been destroyed and rebuilt multiple times. After the Second Intifada her son, Juliano Mer Khamis, came back to direct the organization his mother had founded. He lived and worked in the refugee camp until his assassination earlier this year by an as of yet unknown gunman.

Mahmoud, on Mustafa’s right, fought for seven years before putting down his M-16 to join the theatre. To Mustafa’s left, a former drug dealer. “These two were the worst boys you could imagine,” he says. Now they are actors and role models. In 2008 they traveled to Germany to perform the play “Fragments of Palestine.”

Mustafa continues, “We used to take tanks as taxis. This is how our mentality is destroyed by the occupation. In the theatre we are starting with the destroyed mind of a Palestinian child. Juliano…he recognized this and began to address the problems of the occupation by focusing on the inside of the person.”

Raed Shiokhi of the Yes Theatre, founded in 2008, drops his hands between his knees and leans forward. “A man without hope is a dangerous man. This is what I always used to say.” Raed, active during the First Intifada, was seriously injured in 1988. After losing two of his best friends in the conflict, Raed considered becoming a suicide bomber. “I had no job, barely finished school, no hope, no security…I tried to join religious groups, to convince them to take me, but nobody cared about me.”

In 1997 a friend working in the Palestinian Ministry of Culture convinced him to try acting. “There I discovered I am valuable and that life deserves to be lived.” After 14 years of working as an actor, Raed stresses the importance of working with children and involving them in theatre programs. “Theatre is a form of education and emotional management. It teaches them to use the theatre instead of the gun.”

Here there is an interjection. “We cannot say instead of the gun. It is beside the gun. We can show people an alternative form of resistance, but we are not here to tell them which forms of resistance to choose.”

Mohammed Issa from the Yes Theatre responds that the theatrical movement in Palestine began in the 1920s and that a renaissance of the theatrical movement occurred in 1967. “Theatre is one of the most important tools to resist…We use theatre to promote the message of the Palestinian people.” He goes on to explain the delicate balance between funding and theatre. “Mix money with creativity, and be sure you will lose a lot of things.”

However all of the men agree that theatre in Palestine is not simply about resisting the occupation or portraying the plight of the Palestinian people. It is also an important medium to address difficult themes within Palestinian society. “There are no limits in front of you,” Mustafa explains. “On stage you can talk about homosexuality or women’s sexuality.” It is a place to deal with issues that are not openly discussed. The Freedom Theatre in particular has come under the wrath of a more conservative culture and some artists take to the stage at personal risk.

The evening ends with a humorous skit portraying a Palestinian going through a checkpoint. The audience laughs as a half-naked actor stands in front of a perfect portrayal of an Israeli soldier; the aviator sunglasses, the waving of his gun, and the refusal to speak unless shouting orders. He snatches the hat off of the Palestinian. “Not like this,” the actor portraying the Palestinian shouts. “If you want me to remove my hat, you ask me. I will do it.” The soldier kicks him back through the metal detector.

Throughout the evening, theatre weaves its way in and out of the personal stories of these five men. Earlier Mustafa translated the story of Mahmoud and how he went from a freedom fighter to the Freedom Theatre.

But now Mahmoud addresses the crowd in English.