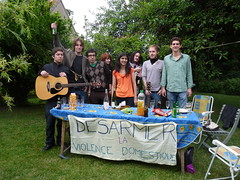 On June 20th, the day after I finished my last final exam, I had a picnic “de sensibilisation” at my parents’ house in the suburbs of Paris for the Global Week of Action Against Gun Violence. Although I wasn’t going to be able to participate in the campaign launch in Cali with Colectivo Dignidad Humana, I wanted to be a part of the flurry of initiatives around the world that week by organizing a little event to inform people in France about my work during the summer and the Disarming Domestic Violence campaign.

Despite the challenge of planning an event in the rush of finishing the semester, the difficulty of bringing Parisians to the “banlieue” and several downpours throughout the day, friends, fellow students and I had great discussions about the issues. Everyone contributed to the campaign either financially or by signing up to become new “e-mentors” and read my blog. Most participants are now proud owners of the key chains, stickers and bracelets that IANSA had sent me. Thank you to everyone who showed their support! 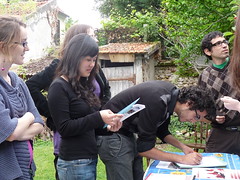 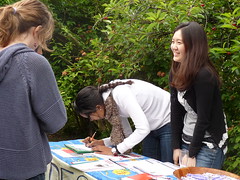 Our discussion often took turns that I had not expected. Having seen Michael Moore’s “Bowling for Columbine”, many people raised the issue of armed domestic violence in the US. I had not given it much thought before, but it’s obviously a problem there. Connie Culp, the first U.S. recipient of a face transplant, had lost her nose, eyelids, many other facial features and the ability to breathe on her own or eat solid food when she was shot by her husband in 2004.

In France, although arms aren’t considered a huge issue because few people own them or use them, the statistics show that approximately 6 women are killed by their partners every month. Although most of these deaths are not by firearms, guns are becoming an issue here as well, as the recent death of a teenager in the Paris suburbs shows. Last Sunday, he died after having been shot in the head during in a gang fight. Two other teenagers were hit but survived.  These stories only show the necessity of starting a global campaign against armed domestic violence, as both guns and domestic violence are a problem everywhere. 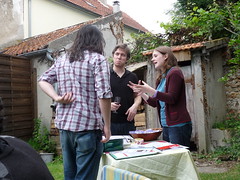 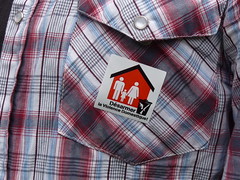 Before leaving, I have enjoyed helping to raise my friends and fellow students’ awareness, but what is really exciting and encouraging are all the great outreach contacts I’ve been making. Patrice Bouveret, president of the Centre de Documentation et de Recherche sur la Paix et les Conflits, offered to help AP fellow Fanny Grandchamp and I organize an event in the fall to present our work. Patricio Scaff and Frédéric Louault from OPALC, a political observatory on Latin America connected to Sciences Po, agreed to put a link to my blog on the OPALC website and asked me to prepare a “dossier thématique”, a thematic study analyzing the issue of armed domestic violence in Colombia from two or three key angles. They are also interested in helping me organize a colloquium at Sciences Po when I return.

Amnesty France, who organized a T-shirt design contest for the Global Week of Action, is really enthusiastic about the DDV campaign. Benoit Muracciole, who’s in charge of the Control Arms campaign and Moïra Sauvage, from the Women’s Commission, believe that this is a great opportunity to start getting involved with IANSA’s Women’s Network. Moïra will be telling the Women’s Commission about us and hopefully some of them will be reading our blogs this summer.

All my phone and in-person conversations about the campaign and field work have been very inspiring and motivating. I can’t wait to start working in the field next week.