Meeting Fabiola Nshimirimana, I can barely believe her past. Beautiful, smiling, and very pregnant indeed, she welcomes me into the room where her microproject is based, renting out glasses and chairs for events and making baskets and gourds. Her demeanour changes only slightly when I ask her about the war, telling me that she was a member of the FDD (Hutu rebels, at first led by a former Minister of the Interior angered at the Army’s attempt to sabotage the democratic government, then led by current President Pierre Nkurunziza). She tells me that in 1997, when she was 17 and in secondary school, she was taken by force by the rebels, and from then on did what the others did to survive. Although she thought of deserting, she feared that she would face problems if she returned home and risked being abducted again; later, however, Eric tells me that she was highly ranked in the rebels and was one of their most fierce fighters.

Talking about the war, she grows more sober, with fewer nervous laughs. Speaking through Eric as she is uncomfortable in French (I have heard some reports that among the rebels those speaking French or English risked being killed) She tells us that the conditions through the whole period were horrible, and that she found it hard to live, and that as a woman – one of about 200 in her brigade – she found it especially hard to adapt. There were many things they needed in combat that were not available. Later, as I am about to leave, she shows me her legs, covered with scars from her time in the bush. 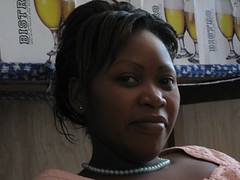 Demobilisation, coming in 2002, was also hard; although the moth of demobilisation training was welcomed; they were provided with food and medicine for those who needed it, as well as education on how to cope with civilian life. But adjustment was difficult; she needed to begin again, in a new career, when others had been working in the mean time. She also needed to learn to live in a different way, and to adjust to life in the commune, something that she found difficult.

In this position, the support she gained from CEDAC was vital. She was able to meet with other former combatants, including women, who could share experiences and ideas. Exchanging experiences and problems that they had faced allowed them to find solutions together. Through this organisation, she has had contact with many women, and now has a number of close friends from other forces, something that has changed her attitude as she now feels more able to relate to them and relax with them. CEDAC also helped her in establishing her microproject with other women, using the money that came with their demobilisation packages. Although the other women were later forced to leave the project, Fabiola is continuing to work and hopes to make it a success. Again, the support she has received from Eric and her peer network at CEDAC has been vital, and she hopes that by participating in these meetings she will be able to help other women in Burundi who are struggling to adjust to peace.