This week, someone told me to watch my language… I was told that Sri Lanka’s current status is post-war, but not post-conflict. Although the government militarily defeated the LTTE last year, ethnically fueled conflict continues to plague the island.  Recent events in Colombo illustrate the point. 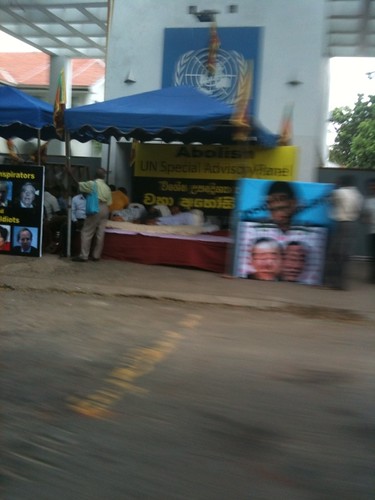 I know it’s hard to decipher this picture, but if you look closely, you can see the United Nations logo, a banner that says “Abolish UN Special Advisory Panel,” and both Ban Ki Moon and Barack Obama’s blurred heads.  The picture is unclear because my three-wheeler driver and I were trying to look inconspicuous as we drove past demonstrators at the United Nations headquarters in Colombo.

Last week UN Secretary General Ban Ki Moon announced that a special international panel will investigate alleged war crimes from the final months of the war when the Sri Lankan government banned NGOs from the war zone and an estimated 7,000 Tamil civilians were killed. Now the government of Sri Lanka has declared that it will not issue visas for members of the special war crimes advisory panel.

Yesterday, crowds gathered at the United Nations office in Colombo to protest the war crimes investigation. Today, the UN told its staff to stay home, and bomb-sniffing dogs, protesters (mostly Buddhist monks), and young men passing out anti-Ban Ki Moon literature (printed in Singhalese, but not Tamil or English) surround the building. Tomorrow, some of the protestors plan to start a hunger strike to the death.

As we drove away from the United Nations building I asked my driver if he had an opinion about the protests. It was hard to hear over the traffic, but he made three things abundantly clear.  First, when I asked him if his life had changed during this post-war year, I expected him to talk about an overall reduction in violence and a greater sense of security and stability.  Instead, he told me that his life has become increasingly difficult.  The price of living has skyrocketed and  lower-middle class Sri Lankans are struggling to buy basic goods like flour, milk, and rice.  A recent string of murders in Colombo has been linked to the rapidly rising costs in post-war Sri Lanka.

Secondly, he told me that as a Tamil living in Sri Lanka, he knows that he will never be treated equally.

Third, he believes that the suspension of violence in Sri Lanka is only temporary. Echoing statements I’ve heard from many Sri Lankans, the driver said that any number of things could spark the next round of violence: political change, increased ethnic tension, or international interference.

Check-points, demonstrators, and continued ethnic distrust make it clear that even if the war is over, many Sri Lankans are still embattled in conflict.