Over the past two weeks, Landmine Survivors Network-Vietnam held three trainings for survivors and people living with physical disabilities on the following topics:

Animal husbandry – this training provided methods on how to best raise cattle, pigs, fowl, and freshwater fish
Peer support and health – helped participants to become community leaders in peer support, rights for people with disabilities (PWD), self-empowerment, and health issues pertaining to limb loss.
Management skills for potential and current leaders of peer support clubs – this training helped survivors who are already leading self-help clubs or who are potential leaders of self-help clubs in their communes to establish, develop, and maintain effective groups.

I had the opportunity to sit in on the latter two trainings, and what stood out most for me were the participatory methods of instruction to help maximize understanding for trainees, such as group discussions, modeling techniques, open questions, trainee input, etc. For example, during the training on management skills for self-help clubs, trainees worked in groups to create a mock monthly agenda for their “clubs,” after which they presented their schedules to the rest of the class. 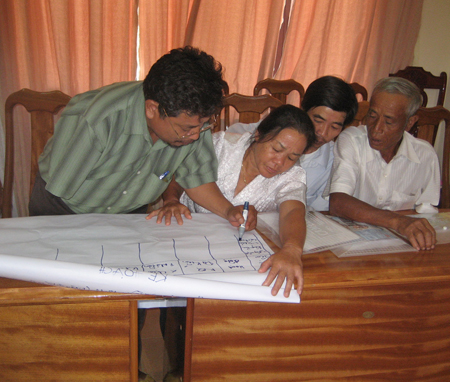 Mr. Le and group members create a mock work plan during the training on management skills for peer support clubs.

Trainees also contributed a great deal of ideas and suggestions throughout the trainings. 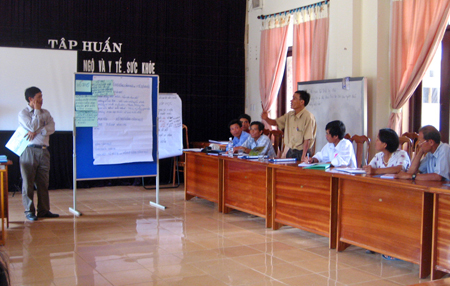 Some trainees were not shy, and a number of them made spontaneous yet thoughtful speeches over the course of the trainings, offering their experiences or their reactions to the content of the session.

Participants came on their own time and were only reimbursed for meals. They weren’t chosen randomly but were chosen by LSN-V’s eight outreach workers (who are survivors themselves and were the trainers during the latter two trainings) based on responses they had made on their application forms. The trainees comprise survivor group leaders, survivors, amputees, persons with disabilities, or managers of commune self-help groups who, through the trainings, gained an opportunity to share and learn from one another. During the trainings that I observed, there were many opportunities for trainees to talk to one another. 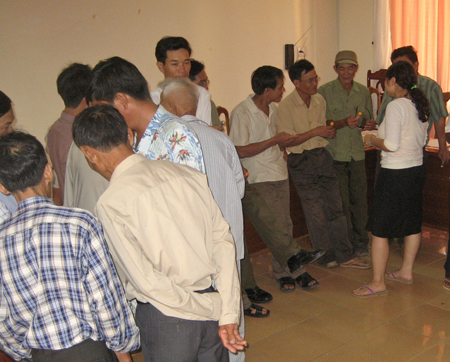 Trainees, all of whom are landmine survivors or have a disability, get to know one another at the training on management skills for peer support clubs. 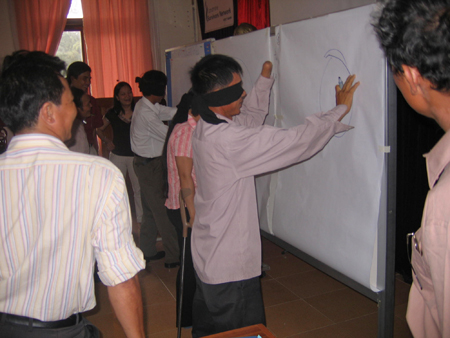 An activity on teamwork during the training on peer support and health.

The participants on their application forms had also expressed a desire to learn new skills and knowledge to pass on to their club members and communities, so they came in with great potential for raising awareness for disability rights and fostering self-empowerment for PWD. At the end of each training, participants obtained certificates of completion which served to verify that they now had greater capacity to be facilitators, team leaders, and experts on rights for PWD. 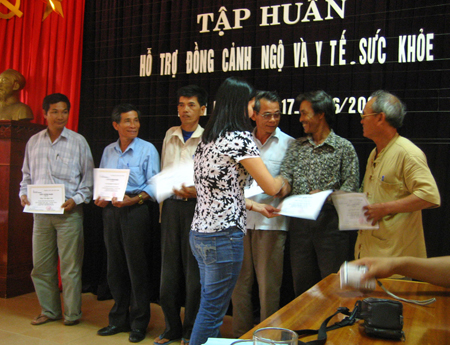 Ms. Yen, a social worker at LSN-V, gives participants their certificates of completion at the end of the training on peer support and health.

Trainings for survivors and individuals with disabilities are a key activity for LSN-V because they empower survivors to help themselves, to know their rights and help others know those rights, and to gain an equal footing with non-disabled people in society. In other words, the trainings are part of a rights-based approach to helping PWD as opposed to a charity-based approach. People in Vietnam do care greatly about those with disabilities or disadvantages, but from what I’ve observed, help is more often given in the form of handouts, which, while given with good intentions, create dependence and are ultimately unsustainable. LSN-V is firmly moving away from that approach, focusing instead on providing the right tools to help survivors succeed. 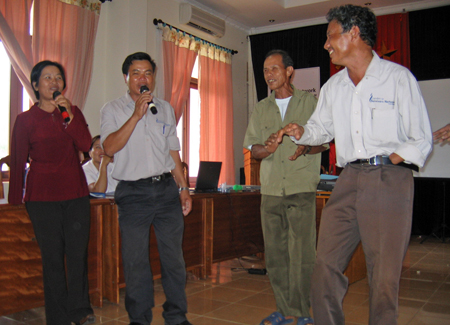 Trainees and trainers take a well-deserved break in between all that hard work!