The members of the women’s group were not enthusiastic when the AEPD team and I first suggested that they quilt to share their life stories. They protested that they were not professional artists. That they’d never quilted before in their lives. That their products would be unpresentable. But they never expressed doubt about the value of their stories. And this, as I told them, was what mattered.

The quilting project began in 2007, initiated by my sponsor, the Georgetown-based Advocacy Project. To date it has helped disempowered groups from around the world produce 13 quilts that tell their stories. Quilts have been produced by women in Srebrenica to commemorate their massacred husbands and sons; survivors of sexual violence in the Democratic Republic of the Congo; and Nepalese former child laborers. The quilts have been exhibited in Europe and the United States, most recently at UN Headquarters in New York where they were viewed by over 70,000 people.

I told all of this to the Vietnamese women’s group to no avail. If anything hearing about the quilting project’s global scope made them even more reluctant to create. They were intimidated. Realizing that I was losing them, I made a final attempt. I picked up the colored markers and paper I’d brought along and drew an explosion with the words “No More Landmines” scrawled next to it. I’m a horrible drawer. Although we didn’t speak the same language, I didn’t need my Vietnamese translator to tell me that the women’s group’s subsequent sigh of relief meant “we can do better than that.” And so they agreed. They would quilt.

In the end, only two of the women could find time outside of their busy schedules of working full time and caring for their families to participate. Luckily, each woman who did quilt created multiple panels on a range of subjects affecting the lives of people with disabilities (PWDs) in Quang Binh Province. Here is the story of one of those quilters:

Ms. Long Ngru was 19 when she was hit by a motorbike and crippled for life. “The first thing I thought after my accident was that I didn’t want to be a burden to my family,” she told me. She spent the next 13 years of her life in depression, bolstered by a supportive family but still unhappy with her life in a wheelchair.

According to Ms. Long, this all changed with her introduction to the Association for the Empowerment of Persons with Disabilities (AEPD). Lured into attending an AEPD training on the rights of PWDs, Ms. Ngru found a supportive community of other PWDs who shared similar experiences dealing with depression and social exclusion. 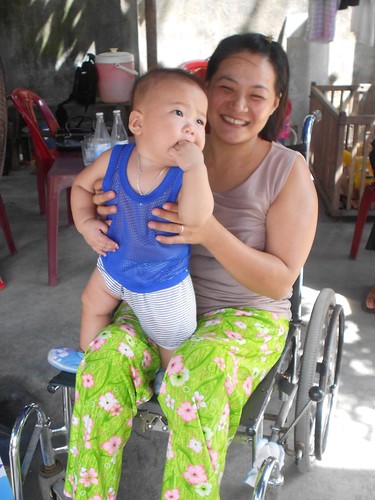 Ms. Long Ngru with her child

Encouraged by the first training, Ms. Long attended a second that taught financial planning skills to PWDs, preparing them to start their own businesses. “Thanks to the training, I learned that PWDs could be valuable,” she told me. Following the training, Ms. Long received a grant from AEPD that paid for a refrigerator, which helped her start the cafe she nows operates.

At the business training, Ms. Long met her future husband.  He was another PWD who had been a recluse for most of his life before his involvement with AEPD.  A year after the training the couple was married. They now run the cafe together while raising their first child. 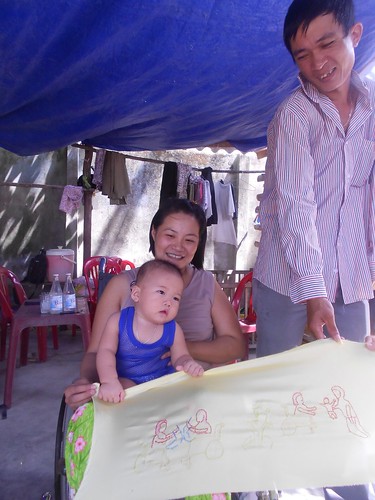 Ms. Long Ngru with her quilt and family

Ms. Long’s quilt panels depict her, her husband and her baby. Ms. Long told me she hoped her quilt would express the happiness AEPD helped her achieve by introducing her to other PWDs and helping her start a family.

To learn more about the AP quilt project, visit The Advocacy Project. A new quilt created from panels made by Vietnamese PWDs will be completed and exhibited this fall.