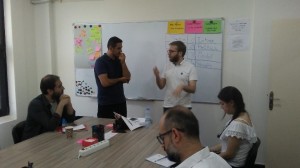 As JP put it: “one of the major pillars that Peace Labs does is reflection, thinking, sharing, exchanging ideas.” Ramzi Merhej, co-founder and vice-president of Dialogue for Life and Reconciliation, now a student at Philipps University in Marburg, Germany, came to share his research on radicalization and deradicalization with a group of civil society professionals active in their field.

I was tasked with immortalizing the event for posterity and sharing it with those who weren’t able to attend. In addition to a written report, JP asked me to make a short video, which, thanks to the training I received from the Advocacy Project, I feel confident I am able to deliver.

Ramzi kicked off the discussion with a word association exercise for “terrorist,” “extremist,” and “violence.” Given the different backgrounds of those in attendance, both professional and geographical, the exercise elicited a wide variety of words and images. Describing his research, Ramzi noted that there are two levels of analysis: the terrorism industry at the micro-level and the larger structural level.

His theory of change is based on a view that addresses the specific needs of the individual. Since everybody has needs, those whose needs (emotional, socio-cultural, etc.) are not fulfilled, look for alternative ways to meet them, and when these people are then faced with opportunities to use violent means to the end of fulfilling their needs, it feeds into a positive feedback loop whereby, as individuals travel down the path of radicalization, they feel their needs are being met, and therefore continue along that path. Thus, he argues that if an individual can be shown alternative ways to meet their needs, then they are more likely to choose a non-violent path. 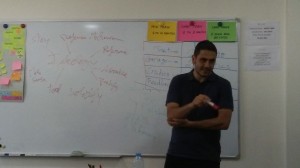 Ramzi’s subsequent question of whether or not the discourse surrounding radicalization should include ideology as an important aspect at the cross-section of various paths led to some active discussion. Some suggested ideology leads to terrorism, others argued it is only a tool. One participant felt that ideology helps to solidify a position, and that people may feel “on solid ground” with ideology as a reference, and that it makes sense by contributing a narrative or justification and can be used to defend a particular course of action. After some discussion, it was proposed that, for example, observance of injustice coupled with the ideology of ibn Taymiyyah potentially leads to jihadism, whereas injustice plus civil society could lead one towards advocacy. 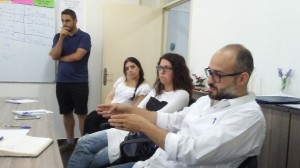 The main strategies for tackling terrorism are: 1) zooming in past the group level, one can address ideology at the individual level; 2) target the ‘staircase to terrorism,’ viewing it as a process; or 3) seeing it as a mechanism, look for what feeds into/catalyzes the progression at the individual, group, or mass level. It was also noted that normalization of violence plays a big role, and that, as a process, radicalization can be affected at any level. Drawing on social identity theory, Ramzi outlined the following four deradicalization mechanisms:

2)    Change in conflict scenario – victory or defeat in a war; change in source of conflict

3)    Conflict regulation – implementation of rules or regulations governing the conflict

For me, personally, listening to the discussion was particularly interesting. Given the extensive collective experience of the participants working in NGOs and civil society groups, it was fascinating to hear their reflections, both serious and at times poking fun at the field itself. Moreover, coming from the West, I’ve heard comments to the effect of ‘why don’t those people sort out their own problems?’ Or even worse, insinuations that people in the Middle East either actively or tacitly approve of the violence that happens. And while not all of the attendees were Muslim, at least one was, in fact, fasting for Ramadan. I think it’s a valuable perspective to see people in the region most affected by these issues so actively engaged in discussion about them – whether or not their voices are heard in the West.