You’re probably thinking, “This crazy Muslim girl is so hungry during Ramadan that she is spending her time before the sun sets obsessing about food.” You would be correct in assuming this, but I promise this blog has a point, whereas torturing myself with Tasty Japan videos did not.

Bainna khibez wa milih– bread and salt between us. In Middle Eastern culture, this phrase can symbolize the beginning of a friendship or a mutual trust formed over the sharing of a meal. 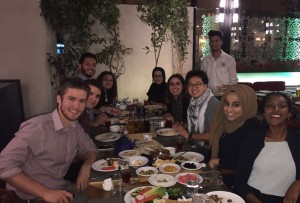 Bread and salt between new friends in Jordan.

In western culture, particularly in the US, it is hard to imagine how important this type of symbolism can be. Often, our breakfasts are stuffed in our mouths on the commute, lunches skipped to continue working, and dinners for one heated up in the microwave. I say this because I am guilty of all those things. Despite my American eating habits, I cannot get this Arabic phrase out of my head. To sit down around a table with someone, knowing full well you must stay there for a whole meal does take a level of respect and understanding. As others have noted before me, it’s only natural for us to use food to heal and bring different people together.

I cannot remember a time when I felt that people with differing opinions were more publicly at odds than right now. I am a huge supporter of healthy and productive debate (see: my Facebook), but it is exhausting to constantly be on the offensive about your beliefs. This has been especially true recently. I don’t know if it’s because I am in a Muslim-majority country, am working with refugees, or am just unlucky, but I feel like I’ve been having a lot of Islam related internet quarrels lately. I am frankly tired of it; my well-thought out Facebook comments, chalk full of quotes from the Quran and citations from the Bible, aren’t convincing anyone that Muslims aren’t crazy extremists hell bent on western extinction. But, I have an idea of what might-one taste of my mom’s or grandma’s cooking (complete with some forced binge eating because you might think you’re full but you’re not until they say you are). 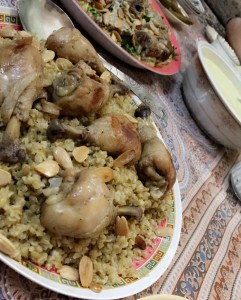 Lucked out with the homemade iftar AGAIN.

It is hard to argue over good food. Even heated political discussions seem more civilized and respectful when you are sharing a meal. And I’m not the only one who thinks this way. The WFP says food is literally a type of diplomacy. If you couldn’t tell, I am so on board with eating with my political and ideological rivals instead of FB comment spamming each other. I can’t wait to combine my passion for food and conflict resolution into The Sultan Center on Culinary Diplomacy, but more on that later.

But seriously, food is a common denominator in all cultures. Everybody’s gotta eat. Sharing precious meal time with others is a gift and it’s one that we should give more often. More people of differing political parties, religions, races, and nationalities should have bread and salt between them. I am not arguing that one bowl of foul and the Houthis and Yemeni government forces will end their conflict, but humanizing an enemy makes it harder to kill them. Gridlock might not be eradicated from Congress forever over a potluck, but it might make asking the other side for compromise a bit easier. Who knows? Maybe the next big break in the Israeli-Palestinian conflict will come over a big bowl of hummus. I wouldn’t be that surprised.

Now that I’ve shared my feelings on culinary diplomacy, I’ll move on to obsessing over what I’m going to cook for iftar.