Every time we interview a group of children, there is at least one child that has a father working abroad. Remittances make up 32.3% of Nepal’s GDP (World Bank Data), so it shouldn’t be surprising that basically everyone seems to know someone doing migrant labor. I have met people with family working in Malaysia, Saudi Arabia, Bahrain, Qatar, and even Afghanistan. 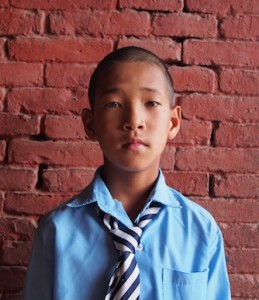 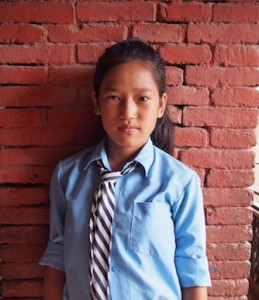 This is Muskan she is 13 years old. Muskan’s father has been gone for 1 year working in Bahrain. He will be gone at least more year. With the money raised on global giving CONCERN-Nepal will be sponsoring her education this year so she won’t have to help her mom in making bricks. 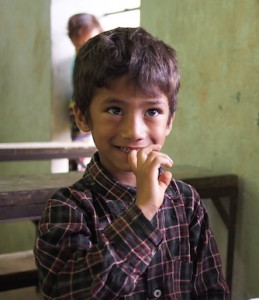 This is Der. He is only seven years old and lives in a village in Ramechhap. His father works in Malaysia and has been there for two years. He was the only child who said his father sends money home regularly.

Most of the children we interviewed said that they only get money sometimes, while others say their family receives regular payments from abroad. According to one source, sometimes the mother’s aren’t given money consistently because they are seen as fiscally irresponsible or husband’s may not trust their wives in general, this likely puts extra strain on an already stressful situation for both sides. However, for some the risks, distance, and isolation is worth the eventual pay off. For others, especially those who are illiterate and have difficulties negotiating compensation, they are vulnerable to exploitation and return home in a worse state than when they left.

Back in June there was an event that shook the nation. It led to the death of multiple Nepalese, but it didn’t even happen in Nepal. Instead in Afghanistan, thirteen Nepali security guards working at the Canadian Embassy lost their lives in a suicide bomber attack. The risk of these kinds of attacks in Afghanistan is very high and the migrant laborers do not receive even a fraction of the protection that Westerners do. To learn more about the appeal of this work I spoke with the owner of a local restaurant who had spent four years working in Afghanistan.

Ragan* took a job on a U. S. base doing laundry for the unit. He said it was a good job, but he was worried about his safety. He had multiple friends injured while overseas and he feels very lucky to have come back in safely. Thanks to this job, two years ago he was able to open a café on top of Swayambunath or “monkey temple” as its referred to by tourists. Unfortunately, one year later his café was destroyed in the earthquake in April 2015. Last month Ragan was able to open a new restaurant near Swayambunath. Although the earthquake set him back, he was still able to rebuild his business from the ground up. The kind of money that Ragan gained from working abroad definitely made recovering from this tragedy possible. 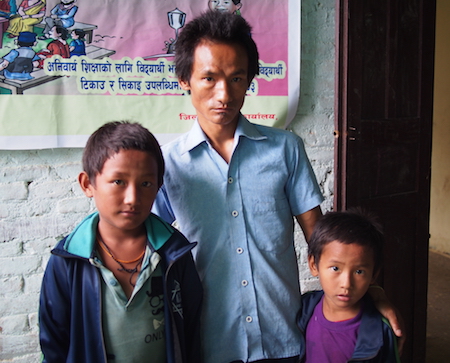 Chari and his two sons.

Others I spoke to were not as fortunate. Chari Tamang traveled to Qatar almost three years ago to work on a gas line. When he started work he began to have major health problems caused by the fumes. His health problems caused him to leave after fulfilling only seventeen months of his two-year contract. This meant that he was unable to fully pay back the loan he took out in order to get to Qatar, so he is now $1,500 in debt. He arrived home on April 18, 2015, exactly one week before the earthquake. Around 3,000 people died in his district alone and his family was displaced. Chari now plans to work in the brick kilns in the fall and it is likely that his three children will be helping in making bricks, unless the family receives support.