Peace signs and ‘duck faces’ are universal, illness is universal, access to care is not 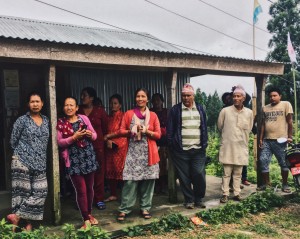 Yesterday I had my first taste of what one might consider “fieldwork” in the most literal sense of the term. Indira, Yunesh and myself set off from Dhankuta after breakfast to a nearby municipality  called Pakhribas. To get there, we first had to do a bit of good ol’ fashioned 4X4ing through the deep mud that for many living in the area makes up an unavoidable part of their daily commute. Along the way, we picked up a few people who were walking along the roads and transported them to their destinations – this is one aspect of Nepali culture that I love, everyone is family! If you are hungry, Nepali people will feed you, if you are thirsty they will bring you tea. When they can make your day a bit easier by giving you a ride to work, they will! Men and women in Nepal even refer to each other using familial nicknames such as Diddi (older sister), Dai (older brother), Bai (younger brother) and Bahini (younger sister).

Once having arrived in Pakhribas, we sat down for a meeting with community members to assess the feasibility of carrying out CWN’s next health camp (to be held in October 2017) within the municipality. At the meeting, approximately 50 people (men and women alike) came to share testimony and discuss the need for a CWN health camp within their community. I learned from an open dialogue with those in attendance that Parkhribas is a close-knit Buddhist farming community, which experiences high rates of uterine prolapse and reproductive afflictions owing to a variety of factors. Community members estimated that between 15-20% of women within the community suffer from uterine prolapse at various stages of severity. This number is likely higher as many women conceal their condition. 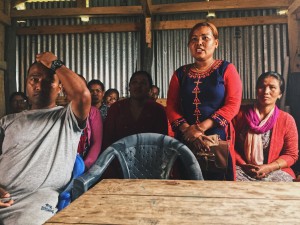 Pramila Tamang advocates for health rights in her community

Pramila Tamang was the first individual to testify passionately about the prevalence of uterine prolapse in Pakhribas. She spoke to some of barriers that women face in accessing reproductive health care. Specifically, she highlighted how women in Pakhbribas must travel long distances and pay out of pocket if they are to access health care. For many women, these barriers are insurmountable, reinforcing the importance of health camps as a way of bringing vital health services to the women who need them most. Many community members in attendance at the CWN meeting expressed the need for a birthing center that would enable women to have access to prenatal care and trained health professionals during birth. Currently, while some women from Pakhribas are able to travel to Dharan, Nepal, in order to give birth, very few are able to regularly access prenatal care. Many women also lack access to skilled birth attendants, instead giving birth in their home. Members of the community of Pakhribas spoke  about women who have delivered children alone and died during childbirth because of blood loss.

Significantly, maternal mortality is almost entirely preventable with access to appropriate, quality health services, yet everyday, 830 women lose their lives, 99% of whom live in the Global South (WHO, 2015). This disparity reflects a failure on the part of the international community and individual states to ensure equitable access to basic, life saving health services, regardless of sex. Rebecca Cook (2001) accurately describes this failure as “one of the greatest social injustices of our times”. Given that maternal mortality is almost entirely preventable via the provision of cost effective interventions (Cook, 2001), there is no acceptable justification for inaction with regards to the reduction of maternal mortality, either on the part of developing states or the international community. It is crucial that cooperation be galvanized between states, CBO’s and the individuals whose lives are impacted by maternal mortality and other reproductive afflictions such as uterine prolapse in order to ensure women have access to basic reproductive health services. A failure to do so will undoubtedly result in hundreds of thousands of preventable maternal deaths, and unnecessary suffering (WHO, 2015). Care Women Nepal is leading the way towards the creation of a future in which the women of Dhankuta have access to reproductive health services and do not succumb to social injustice. 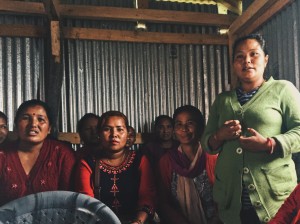 The next woman who spoke at the meeting highlighted that many women within her municipality have been suffering with prolapse for years either because their family members do not take their complaints seriously (or worse – they fear abandonment by their family if the reproductive afflictions they are experiencing are discovered), they are unaware of treatments available, or they have been told that treating uterine prolapse will result in cancer. Upon hearing this testimony, I asked the women to raise their hand to determine how many women believed that treating prolapse could result in other serious illnesses and many of the women in the room raised their hand. I then followed up by asking the women about the education that they had received about reproductive health. Unsurprisingly, women in rural Nepal, and the women of Pakhribas receive no education about reproductive health, other than that they gain from their own personal experiences or from that of others. Importantly, this led me to the realization that the barriers that women in rural Nepal face are much greater than physical, they are exasperated by a lack of education about women’s reproductive health. For me, this testimony reinforced the need for CWN and other CBO’s to adopt a holistic approach to health advocacy. I believe that CWN does this by proceeding health camps by outreach campaigns that provide education and raise awareness about women’s reproductive health issues. 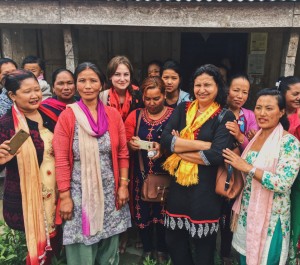 In some ways, during this meeting I felt disheartened that I could not do more for these women beyond hearing their stories and working to strengthen the operations of CWN. Many of the women were under the impression that I was some sort of health care professional who could provide advice about very personal matters, such as if it was O.K. to engage in intercourse while experiencing uterine prolapse. Importantly, the women of Pakhribas are strong advocates, ready to take their reproductive health into their own hands, if only someone would provide them with the knowledge, support and proximity to health services that they so desperately need. I believe that CWN’s upcoming health camp is a good step in that direction. CWN has also began construction on another CWN office within the municipality that will hopefully bolster the capability of the women of Pakhribas to realize their reproductive health rights long-term.

Moving forward, to facilitate a holistic approach to securing the right to health, long-term alliances must be forged and nurtured between stakeholders who work closely with the communities who have yet to see their right to health realized such as Care Women Nepal, and the inter-governmental human rights organizations such as the UNFPA who genuinely want to support the work of organizations in upholding women’s right to health. These alliances must be positioned to treat marginalized populations as “agents of change”, rather than passive recipients of policies or programming (Sen, 1999, p.623). Ultimately, governments, scholars, civil society and individual actors need to move beyond accepting complexity as an excuse for complacency, to mobilize around imperative goals such as the realization of women’s right to health. Peace signs and ‘duck faces’ are universal, illness is universal, access to care is not. Care Women Nepal is working to change this reality for the women of Dhankuta. As an advocate for women’s health rights, I am truly grateful to play a small role in CWN’s work this summer. 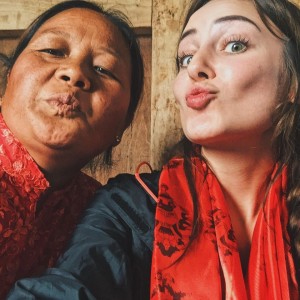 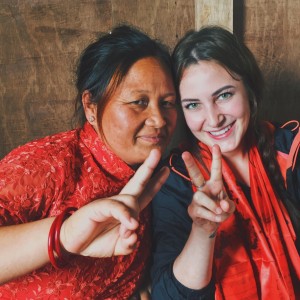 The peace signs were Kaushila Tamang’s idea, I swear. While we can’t communicate without the help of a translator, there are certain symbols that are universal. Peace & love friends.