I spent half of last week on a patrol of the Sarstoon Temash National Park with four SATIIM rangers and two soldiers from the Belize Defence Force (BDF). The objective was to monitor activities like fishing, hunting, logging, and seismic testing.

Admittedly, I had some hopes of high-speed boat chases. No such luck. Nor did I spot the exciting and elusive jaguar (rangers had seen one swimming across the river on a recent patrol). However, I did get a good sense of the care and perspicacity required of a four-person ranger team managing almost 42,000 acres of pristine but threatened river, wetlands, and forest.

We began at high speed through wind and rain in SATIIM’s 28-foot twin engine skiff, down the coast, past Barranco, and into the mouth of the Temash River. There, at the SATIIM ranger station, we dropped our backpacks, snacked on the canned meats and whatnot we had brought to eat the first day, and I took the 50-yard wade from the cabin through a stinky marsh to the outhouse, which had become home to a colony of biting ants and a family of bats. Let’s just say that SATIIM funding is not going into cushy accommodations for the rangers. 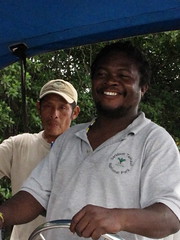 Nevertheless refreshed, we set out to monitor the Temash River. This involved trolling along one shore or the other, while Egbert Valencio, the boat captain, and the rest of the rangers surveyed the land for human activity. To the untrained eye, this stretch of silty brown water and green, mangrove- and palm-filled wetland looks like pure wilderness. But the trained eye will see, even from a distance, a cut tree, trodden undergrowth, or an unnatural clearing. A ranger would make a signal, and we’d circle back, jump ashore and investigate. Sometimes it was nothing, sometimes remnants of a fire likely set by hunters (of species like peccaries, agouti, and curassow).

The rangers also knew between which trees and around which curves lay the park’s boundaries and the seismic lines cut by US Capital Energy (USCE). The former they cut back with machetes or made a note of the need to clear. For the latter, it was ongoing assessments of how well the forest was growing back. Very well, they concluded, thanks largely to the rainy season filling up troughs with water along the would-be trail.

USCE has cut two seismic lines across the park. They have been permitted by the government to cut five more in the park, and two just outside. In theory, SATIIM and the government of Belize ‘co-manage’ the park. In fact, the government provides two BDF soldiers to accompany the rangers on these patrols (which happens semi-weekly only when funding for fuel permits), but all rangers and all funding for the park management and monitoring come from SATIIM. Nevertheless, neither USCE nor the government has informed SATIIM of the results of the first seismic tests or if and when the next ones will take place. The company has also failed to comply with its own Environmental Impact Assessment’s stipulation that it only enter the park with SATIIM representatives. And it looks unlikely that USCE will be held accountable in the future. In a permit for seismic testing granted last year, the Forestry Department designated itself as the body responsible for the monitoring of that testing. This is like the fox appointing himself guardian of the henhouse since the government never would have even required an environmental impact assessment from USCE had SATIIM not taken it to court.

Anyway, the rangers do what they can to monitor the lines, other human activity, and wildlife, though sightings today were generally too standard to note – the ubiquitous cormorants, tiger herons, kingfishers, and butterflies that followed the boat.

After some five hours of motoring up and down the river and stopping to climb over mangrove roots and splash around the soggy shore, we returned to the cabin. Some of us swam in the cool, sweet water of the river. Egbert took the boat a few yards out into the ocean where he got cell phone reception, and saw a manatee surface and dive under. Later, a small boat docked at the cabin with a bucket of fresh shrimp. Mercifully, we had something real (and delicious) to mix with our ramen noodles that night. And that was about it. The only light was a gas lantern, the stars peaking through the tree branches, and, visible from the end of the dock, the glow of Livingston, Guatemala, down the coast. Half the crew was asleep by 8, and I amused myself by hanging out on the steps and shining my headlamp on the tiny crabs living in the water under the cabin.

I walked to the dock and found something too cute and large to be a rat running along the edge of the boat. It stared into my light, eyes glowing red, then ran away, then ran back, as if it had already forgotten about me. I ran back to the cabin to get my camera, and mentioned the sighting to Egbert. ‘Oh, that’s the opossum,’ he said. He had seen it already. When he came back out with me, it was gone, but he immediately located it on the tree and followed it with his flashlight to point it out. It still took me a while to see it. ‘It will come back if we turn out our lights,’ he said. We did. Blackness. After a few seconds, Egbert said, ‘He’s probably back, right in front of you now.’ I turned on my light, and there he was. He ran away again, and Egbert said that’s the last time. I went away and came back, but Egbert was right, the critter had had enough. This is why people like Egbert, who have lived on the edge of the forest all of their lives (as have their families for generations) should be the ones to monitor human activities there – oil-related and otherwise.