Saying ‘hello-goodbye’ to the villages Part 3: The trek to Crique Sarco

I arranged to interview John Makin about sustainable community forestry at 6 am, but I was surprised when he came looking for me at 6:05. He was in a bit of a rush because he and the village chairman were meeting with state forestry department officials. That sounded like a good sign.

In fact, Makin said working with forestry has been a challenge. The committee needs permits from them for things like purchasing a chainsaw (they have one) or building a sawmill (they have yet to get the finances for that). At the same time, Makin said, the concept of sustainable community forestry is new in Belize, so it takes a lot of explaining to the government.

Here’s how it works: When Conejo won its land rights case in 2007, village leaders decided they wanted to find a way to make money while sustainably managing what was now legally their forest. They sought help from SATIIM and established exchanges with Guatemalan villages that have been doing this. The community developed a 20 year plan for harvesting timber from a parcel of several hundred acres divided into 20 blocks. One block is logged at a time, in the dry season (January to June), with care taken to avoid cutting trees of certain sizes. The variety of trees are sold, and several months later, more cutting is done.

The great challenge, Makin said, is competing against illegal loggers, who sell their trees more often, more aggressively and at lower prices. What’s key is finding foreign buyers who are willing to pay more, perhaps because they know and care that these trees are cut sustainably. A growing risk also is that illegal loggers, as they destroy the rest of the forest, will increasingly enter the land of the community forestry project and ruin its work. Hence the growing need for the support from the government. 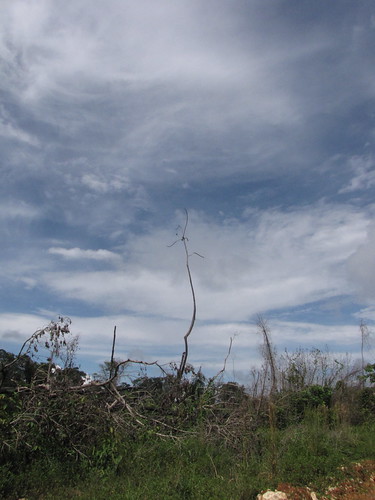 Now it was time to get all my things together just in case a truck came by on its way to Crique Sarco. I began to walk up the road with my things, not because I planned to do the eight-mile journey on foot, but because I knew there was a spot on a hill down the road where cell phones worked. I had been led to it the previous night, but that was in the dark so I didn’t quite know where I was going now, and I never found the place again. Instead, I eventually put down my things on the roadside and took pictures of milpa farms and cattle ranches. I recorded the sound of chainsaws in the distance and noted the men balancing chainsaws on their bicycles as they trundled down the road, this day, as in past days. I also saw horses hauling piles of already perfectly squared logs of beautiful white and red swirled rosewood – the wood that is suddenly all the rage in China, the tree that is headed for the fate of mahogany (the national tree of Belize) – virtual extinction in the region. 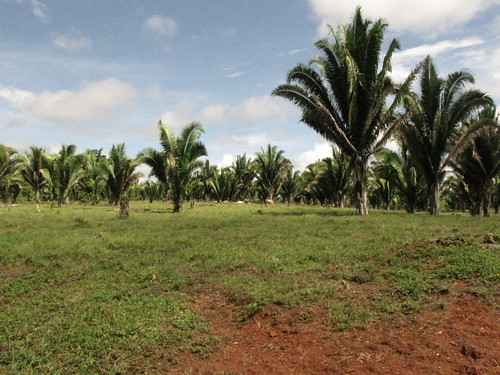 I hailed a big public works truck. The driver said he was going to the village of Corazon, not Crique Sarco. I said ‘no thanks.’ I wanted to go all the way, not get left on the road in the middle of nowhere. But then, for a long time, there was nothing. I was getting tired of the road, of lugging my things, of the sun. When the next public works truck came, I hailed it. He was going to Corazon too, but he said, ‘Get in, I’ll take you to the junction and you can walk.”

“Oh, it’s walking distance?” I said.
“Sure.”
I got in and we got going. It was then that I asked, “How long would it take to walk?”
“Oh, an hour and a half… two hours and a half.”
At that point, I wasn’t getting out. I would get off the junction and just hope for the best. Or walk two and a half ours in the sun with my three bags. It wouldn’t kill me.
I was dropped at the junction just as a young man lugging a sack of corn on his bike turned onto the same road. The bike he was riding stirred in me jamais vu, for I was sure I’d seen the same one on bike hint. He came from Sunday Wood, the village I had just ridden through. Sunday Wood is technically a member of SATIIM, but the village’s strong support for oil drilling and against sustainable logging had soured relations. The young man told me the villagers would be happy to work with SATIIM again if the organization gave them jobs, but in the meantime they would oppose any initiative that might limit their access to cash. The man reached his destination too soon, and I was on my own with a very long, sunny road ahead.

You’d think that a road cutting through the jungle would be a shady one. But here the terrain is low and thick, so from the road it would be impossible to enter without crawling through thorny vines and branches. The sun was unavoidable, until I came to one of the region’s heavenly creeks – perfectly clear emerald water. Here I could drop my things and enter the forest, walking along the steep creek bank. There was no way to capture on film how beautiful this little jewel was, and it went on and on, but now the biting flies were getting me, and I worried a truck would pass on the road. So I dipped my feet, reapplied the SPF 50 sunblock, and was on my way up and down the hilly road.

An hour and a half passed very slowly. Every once in a while there would be a house. A whole family of farmers (all carrying machetes, including a girl in a skirt) passed by and greeted me. The father told me that usually there was a man who drove by at 3pm on his way to Crique Sarco. It was noon. I said I hoped I wouldn’t still be on the road then. He gave no response.

I started to feel weak, and I noticed, finally, a spot of shade at the curve of a road about the size of my backpack. I stopped and was pulling out some left-over tortilla, when I heard a truck. A man and two women in a pickup crested the hill. I waved madly. They were going to Crique Sarco. Why, I never figured out (though I learned he was the cousin of the public works guy who had given me the first ride). He said he was just going to the river at the entrance – it was his destination for some reason, and he was dropping the two young women. It seemed odd, but I was lucky. Now I understood why SATIIM staff are given orders to pick up hitch hikers. If they don’t, people will hold a grudge against the organization. With very good reason, I say.