Saying ‘hello-goodbye’ to the villages Part II: Getting to Conejo

When I got to Conejo, the first thing I saw was the SATIIM truck. Cordelia, the park manager, had driven there as part of an early morning excursion to various villages (I had opted to leave later instead of going with her). She was here now helping Conejo’s sustainable community forestry committee keep its books. 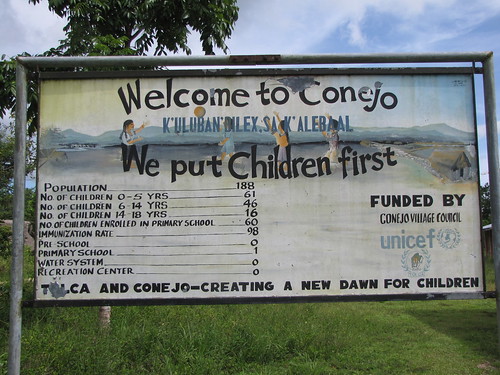 I interrupted the meeting because the committee’s chairman, John Makin, is the owner of the village guesthouse, and I wanted to be sure I had a place to stay. He referred me to the guesthouse manager, across the road, who also happens to be the village’s SATIIM board member. 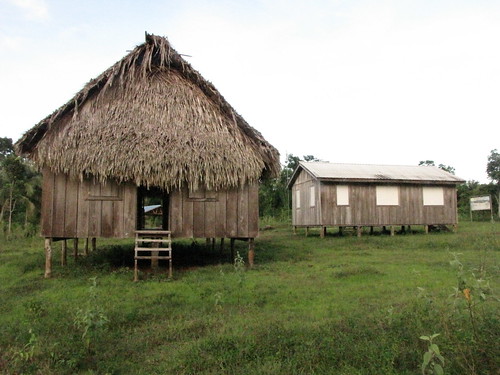 The manager and board member, Manuel Caal, readied the spare, emory wood, shaggy thatch roofed cabin for me, and then granted me an interview about SATIIM and community forestry. 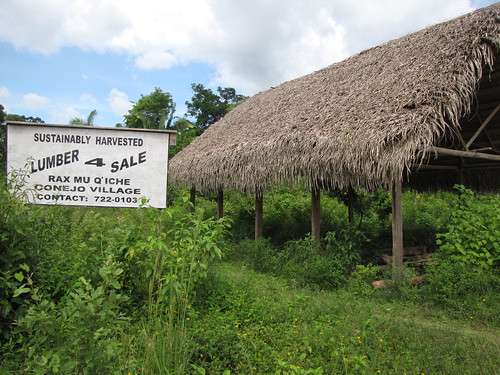 Caal said the indigenous villages’ legal victory against the government for communal ownership of the local land was a key part of beginning to protect the forest. In 2007, the Belize Supreme Court ruled that the claimant indigenous communities (Conejo and Santa Cruz) own the land in and around their villages, and the government does not have the right to use or grant concessions to that land without permission, as it had been doing. Three years later, the Supreme Court issued a similar ruling for 38 more villages. Still, the government plans to challenge the Conejo and Santa Cruz decision in the Caribbean Court of Justice.

Caal describes the ruling as a great positive step. The issue has enormous implications for oil drilling and logging. However, two major challenges remain (besides the government appeal): the villagers are largely split on the issues of oil drilling and logging; and the small and indigent village councils need the help of the government to go after illegal activity – a particularly tough challenge given the corruption and complicity of government officials in the area of logging. I’ll soon post video clips from the interview… 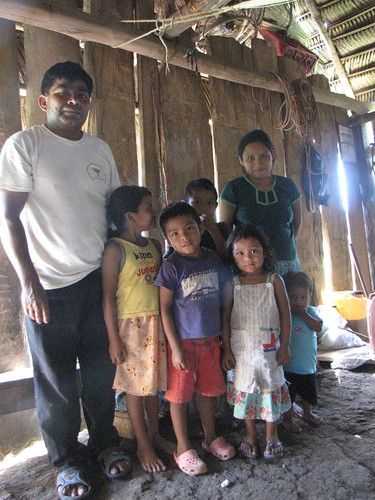 The rest of my afternoon was quiet and restful. Makin and his wife had Cordelia and me to their house for lunch – chicken soup with piles of fresh-made corn tortillas. Their home was set back from the road, down a path, and typical – earthen floor, walls of spaced out emery planks, a tall stack of drying corn cobs, a cinder-block stove,… and a baby high chair made of slabs of timber nailed together, and an extension cord (apparently from when the house’s solar panel was working) used as a belt to keep the little girl in. 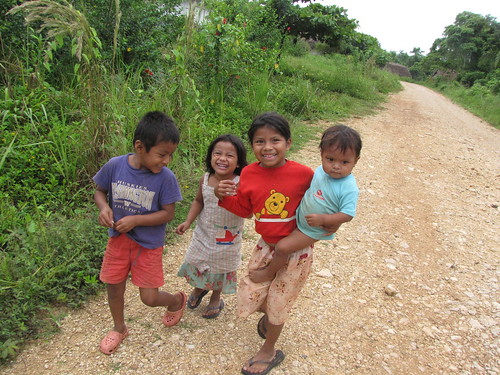 Back at the guesthouse, visitors of all ages came over to greet me and find out where I was from and what I was doing in the village. Caal’s five kids were particularly sweet, keeping me company, laughing almost incessantly, and bantering with each other in Q’eqchi. The seven-year-old Josephina took me across the soccer field to show me where people bathed in the creek.

Not knowing the local norms of public nudity/decency, I waited until past the village bedtime to go back and bathe. It was only about 8 but felt like midnight – quiet on the road except for crickets and frogs and a radio in one house that played a mix of reggae and traditional Mayan harp. The soccer field was full of fireflies darting around at waist height, and I kept mistaking them for people with flashlights. Countless stars shone in the velvety sky, but it was almost pitch black at the shaded creek. I stood in the cool water in the dark as little fish nibbled the skin on my legs, and it was then that I completely understood a comment a teenage villager had made to me earlier that day: “I would never want to live in town.” 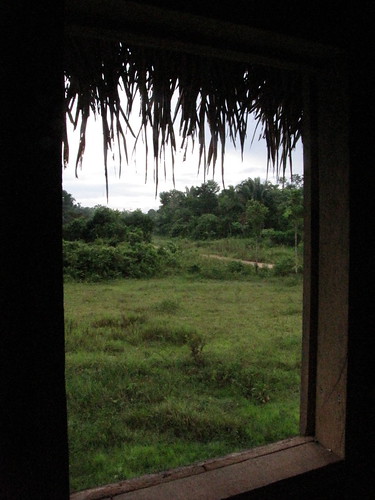 The comments of the teenager, John’s brother Charles, were not uncommon. I’ve been struck by how often in Midway, and now in Conejo, I hear people express satisfaction with their small, traditional subsistence villages. I am struck by this not just because I, personally, enjoy towns and cities, but because it seems at first to contradict something else I’ve been hearing all summer: that people desperately want ‘development’ in their communities, sometimes even if it means something as drastic as oil drilling. I’ve learned that there is nothing contradictory here. People love where they are and the lifestyles they live, but they would also love some cash flow. As subsistence as their villages are, cash is essential. It’s required to take the bus into town for a doctor’s appointment or to buy books and uniforms for school children, to buy materials for clothes in general and to pay someone to sew them. There’s the need for farming equipment, for food that one doesn’t grow, and on and on. The key for SATIIM and the communities is to find ways to generate cash flow without either destroying the environment or lifestyle and without exhausting that very source of cash flow.

This obviously comes into play with the question of oil drilling. It’s also where sustainable community forestry comes in.