Ruwwad Al Tanmeya is a regional community development organization, founded in Jordan in 2005 by Fadi Ghandour (the founder of Aramex), as part of his corporate social responsibility (CSR) efforts. Ruwwad expanded to Egypt and Ramallah in 2011, and it opened in Tripoli, Lebanon, in 2012.

The following is based on a conversation with Sarah Al-Charif, director of Ruwwad Al Tanmeya in Lebanon.

While Ruwwad is not explicitly a peacebuilding organization, in Tripoli, given the fact that the communities of Jabal Mohsen and Beb El-Tebbeneh are both equally integrated and working together at Ruwwad, the organization has, in fact, contributed to peacebuilding. While supporting education, economic empowerment, and civic engagement is their primary goal, they have a significant secondary peacebuilding component. Sarah explains that, while they do not organize conferences or workshops about peacebuilding or conflict management, they are actively involved in the process itself: “peacebuilding for us is more tangible; you can measure it. Because you’re getting people together from both communities to be educated, to learn together by attending the same university classes, to be together on the playground, to be together in the workshops that we do, to work together, to volunteer together. So this is why we see the peacebuilding itself as a byproduct of the programs that we do.”

Sarah has been deeply connected and instrumental in the development of the Ruwwad Center in Lebanon. Since 2010, she had been working with Hala Fadel, a social entrepreneur and businesswoman who focuses on promoting social impact and entrepreneurship in the Arab region. Sarah worked with her on entrepreneurial competitions in Tripoli and North Lebanon supporting entrepreneurs to start their own businesses. After achieving notable success in the city, they decided to continue with more initiatives in Tripoli. 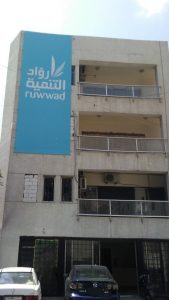 2012 was the peak of instability and insecurity in Tripoli due to the sectarian clashes happening between the neighborhoods of Beb El Tebbaneh and Jabal Mohsen. Hala was able to see the importance of intervening in such a context at such a sensitive time. Hala and Sarah had the idea of working on development initiatives in Tebbaneh and Jabal Mohsen, but wanted to conduct an initial community needs assessment to deepen their understanding of the context, programmatic needs, and grassroots concerns. Having access to a strategically located building, and having a team, a vision, and a needs assessment, Hala (through her connection with Fadi) was able to establish Ruwwad Al Tanmeya in Lebanon, with herself as chairwoman.

Although they didn’t start operating from the building until January 2013, they started activities from the summer of 2012. Since then, the Center has witnessed the various evolutions of the conflict, having operated during ten of twenty rounds of fighting, at the time of the reconciliation in April 2014, and in the post-reconciliation period up to the present.

The Ruwwad Center is unique for several reasons. First of all, it is mainly funded through the private sector. Business entrepreneurs deploy their resources, connections, knowledge, etc. to support marginalized communities. This gives the Center a significant competitive advantage vis-à-vis other NGOs. Second, the location is strategic in that from the outset it enabled the organization to bring people together while the surrounding environment was trying to tear them apart. Third, the team of people who have been behind the operations from the beginning feel a strong sense of ownership and dedication to their work at the Center. Fourth, the model itself helps the people become aware of their own resources and strengths to support their own communities.

For a community development program to be successful, it must rely on, and be supported by, members of that community. People from the outside will not properly understand the needs – and thus will not be able to really solve the problems  – of the community in question because they will come with their own perspective and experiences. Through Ruwwad programs, community members discover what skills and capabilities they have, and what it takes to develop their communities. The programs themselves are also carefully designed. Every year, staff go to Jordan for regional training on methodologies, which they then integrate in their programs with the youth, so that the youth can then transfer this learning to the beneficiaries.

All of the Ruwwad Centers follow the same model with three main programs: Youth Organizing, Child Development, and Community Support. The Youth Organizing program opens the door for youth ages 14-25 that are marginalized and in financial need, who want to pursue their education at university or polytechnic institutes, who have shown leadership skills, and who are passionate about giving back to their community. After several rounds of applications, written tests, interviews, and participation in community engagement projects, if selected, they are provided with a full scholarship until they graduate. 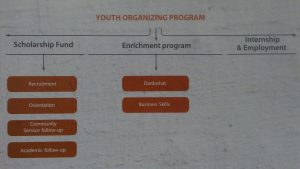 The scholarship is conditional, however. As scholars, they must also be volunteers, dedicating four hours per week to support their local community through Ruwwad programs. They must also succeed academically as well as participate in the enrichment programs offered by Ruwwad. Each week, Ruwwad hosts cultural debate sessions, called Dardashat, where they bring speakers or facilitators, and give the youth a space to express themselves and listen to each other on a particular topic. This is a significant component of their life skills training as they learn to listen actively and to respect, accept, and appreciate diversity. This also provides a space for them to find common ground and discuss painful moments they’ve gone through, realizing they’ve shared similar pain, and now share a same purpose to live with dignity, to be educated, and to have a better future. Scholars also attend business skills trainings to empower their language, IT, entrepreneurial, and soft skills. Thus, when they graduate after 3-5 years, the scholars have at least a Bachelor’s degree from a university or polytechnic institute, 100 hours of social experience in their local communities, and employable skills to be competitive in the job market. Ruwwad also supports them to find an internship, job opportunities, or even to start their own business. 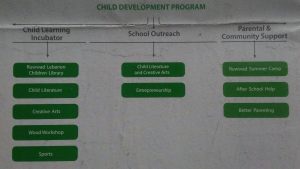 The third program is the community support program, which focuses mainly on empowering women. This program includes the Women Advancement track, which supports women from both communities economically and educationally. Three years ago, as a component of their economic support program, Ruwwad opened a community kitchen, where women who share the painful effects of the conflict (loss of family members, etc.) can come together, share a new purpose, and support their families.

The women also go through an educational cycle which supports their learning through a curriculum delivered either at Ruwwad or through partnerships to raise awareness about legal issues, human rights, nutrition, hygiene, etc. Moreover, the medical student volunteers at Ruwwad also design an educational curriculum for the women to raise awareness about health and hygiene, conducting sessions every week or every two weeks. 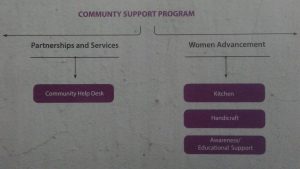 The community support programs also feature various other kinds of business/economic support programs through microloans, grants, or in-kind support. The Ruwwad Center also implements some other project-based programs, such as the French Fund for Innovative Projects from Civil Societies and Coalitions of Actors (PISCCA), where high school students receive either French or English language support and IT, in order to be prepared for, and succeed in, university studies and the job market. Some of these high school students also later become scholar-volunteers at Ruwwad. In this sense, Ruwwad is looking to complete the cycle, reaching back to empower everyone from childhood until they enter the job market. 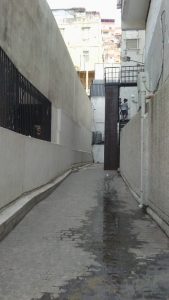 All this is not without challenges, however. In fact, the Ruwwad Center has faced challenges and overcome obstacles since its inception. During the period of clashes, security was one of the biggest concerns. Even getting to the Center was dangerous. While physically located in Beb El Tebbeneh, the front entrance to the Center opens on Jabal Mohsen. Thus, in order for people to safely enter from Tebbeneh, a side entrance had to be built.

Side entrance to the Ruwwad Center

Even so, for some of the youth, even those from Tebbeneh or Jabal who may have lived on the periphery of their neighborhoods, convincing their parents to let them go to the heart of the conflict was certainly a challenge. 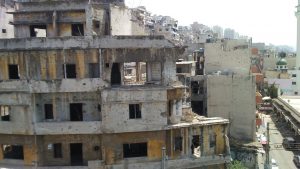 But even aside from the conflict, the very nature of their work presents many obstacles. While working with marginalized communities and women empowerment programs already presents a set of challenges, Sarah explains that, in addition, “the community service itself was a challenge; because it’s a new concept to engage people and to tell them ‘you have what it takes to give back to your community.’ So this is a new model for them; a new concept.”

Additionally, given the dominance of political and religious affiliations in the area, building trust with the communities also posed a challenge. The people were initially cautious about a potential hidden agenda of the Center. However, after seeing the bravery, dedication, and perseverance of the people at Ruwwad, working impartially despite the conflict, and supporting both sides equally, it didn’t take long for the Center to build this trust and credibility with the communities. 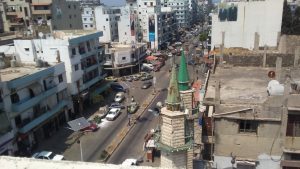 View of Syria Street from the roof of the Ruwwad Center

Through these programs, the Ruwwad Center is contributing to the development of new leadership within the communities, not built on any religious or political affiliations, but on the caliber and qualifications of people more aware of their problems and more passionate about representing their communities. Given that it takes between three and five years for the scholars to finish their programs and earn their degrees, the first significant batch graduated at the end of last year. Many have already found jobs or internships, but they still maintain their connection to Ruwwad, stopping by to visit when they have the chance, and continuing to support and serve as ambassadors, advocating both for their communities and for the Center itself. We all look forward to their future successes and continued efforts to support their communities.