It seems as though persons who survived Ebola in Liberia, as I have been learning from them in the last weeks, are those who most bore the cost of ending the epidemic.

Their entire belongings were in most cases torched, with no means to reacquire them. Survivors, as they tell me, were left alone to fend for themselves, even though they lost almost everything they owned pre-crisis. 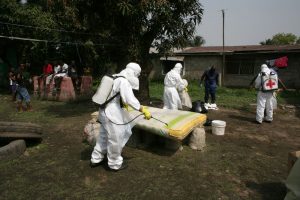 Though Ebola had been known for many years before the outbreak in Liberia, and no known therapeutic had been developed before the West African outbreak, the scale of the outbreak in the region presented a novel opportunity to test different methodologies to treat infected persons. Health practitioners literally iterated different methods, prominent among which was the treating of symptoms.

Before 2014, Liberia and the other two West African countries, Guinea, and Sierra Leone that were concomitantly affected had had no experience with Ebola. As medical practitioners who were active during the outbreak indicate, the best treatment formula at the time was to identify, isolate, test, and treat [symptoms]. Ebola cases were divided three categories, suspects, probable and confirmed.

Suspects were those who came in physical contact with persons who tested positive for the Ebola virus or persons who died, sometimes of unknown causes, but who showed symptoms of Ebola before they died. If a case was known to have showed symptoms of Ebola, like vomiting and haemorrhage, those who came in contact with such a case were put under immediate isolation. They were suspects. In most cases whole families and households were isolated in the community along with the accompanying stigma. Such families lived through stigma from the community even after they completed their 21day isolation period or when their Ebola positive relative recovered.

Probable were those who were showing symptoms of Ebola, who became sick, but for whom a positive test had not being returned. Such persons may have also come in contact with Ebola cases, but the links were not clearly established. They were taken to a holding center, as survivors tell me, and put under observation and provided preventive treatment while they awaited their test results; even though survivors have told me at their probable stage, they received no medical care. In cases where test results proved negative, such persons were immediately returned home and mandated to follow preventive measures such as continuous handwashing, staying away from persons who were visibly sick and persons who died of unknown causes.

Staying away from the dead was a counterculture introduced in Liberia by the Ebola crisis, and which enraged a broad spectrum of Liberians. The rejection of this Ebola preventive measure also had fatal consequences for the population, fuelled the spread, and deaths, and prolonged the outbreak. People visibly ignored the staying away from the dead edict. Medical experts indicated that corpses of Ebola victims were more infectious. Yet this did not deter Liberians who are very used to paying “last respect to the dead.”

Confirmed were persons who tested positive for Ebola while at the holding center. Confirmed cases were immediately transferred to the Ebola Treatment Units. There were several of them in Monrovia, the most prominent being ELWA, run at the time, by Samaritan’s Purse and later taken over by Médecins Sans Frontieres, MSF. Those who went to the ETU faced one of two prospects: die or live, based on how early the person sought treatment. If the confirmation of Ebola was done early enough, the chances of survival were high; those who absconded, as many infected persons did, or sought treatment late had very slim chances of survival and in most cases, died.

But survivors, as I have been learning, in the last weeks faced many other grim prospects for life after Ebola. Even though there was no certain chance that persons who tested positive for EVD and were taken in at the ETU would return alive[1], those who returned came back to a life of “nothing.”

Those who tell me they were engaged in petty trade and other businesses, lost those during their Ebola experience. Those who were employed in some form, lost their jobs. One female survivor told me she worked at a building materials merchandise in Monrovia. As soon her employer learned that she had tested positive and was taken in at the ETU, the employer immediately calculated the amount of money due her up to that date and sent same to her family. This was the end of her service. She has since not got an employment.

The same was the situation for a male survivor who we have met on this trail. He worked at a local bank before his Ebola encounter. Since the day he telephoned his employer that he was not returning to work the day after he began experiencing symptoms of Ebola, that was the end of his service. Since then, this survivor has not returned to formal full-time employment. These are possible prosecutable civil rights cases.

The worse loss that survivors crave is the torching of their belongings to prevent Ebola transmission. All survivors we have encountered during the last weeks returned to their homes and met no belongings. Their belongings were torched to prevent EVD. It was widely believed that the Ebola virus lived on surfaces for about three to five days and in colder areas for up to 7days. Thus, the torching of the belongings of Ebola survivors was a standard preventive measure against the re-emergence of Ebola in homes where positive cases had been identified.

But what survivors now crave as an unjust action is the fact that the prevention of Ebola is a positive externality, a sort of public good; the cost of which should not be borne by them alone. Survivors believe, if the torching of their belongings was an Ebola preventive action, survivors themselves faced no immediate threat of Ebola after recovery and hence the action had no personal benefit to them.

Thus, those who torched their belongings should have taken actions to compensate them for the loss; something survivors tell me would have been a capital to start a new life. Survivors say literally their lives were reset upon recovering from Ebola, and all they had accumulated during their pre-Ebola life were lost to the crisis, whether savings, personal belongings, or employment and to date, they have not been fully restored.

Survivors whose homes I have visited during these last weeks are all visibly poor economically. They attribute their poverty situation to their bout with Ebola: either they lost a parent, a spouse, a business, an employment, or a benefactor and said loss upended life prospects. The effects of which they still grapple with, in terms of lost dreams and hopes.

The question now becomes, if survivors victoriously overcame Ebola, a feat of no cause[2] of their own, should they alone, as they are, bear the cost of eradicating Ebola out of Liberia, and probably the Mano River subregion?

While our assessment in these last weeks has not taken us to Guinea and Sierra Leone, two countries in the region that were affected as Liberia, reports indicate survivors have similar concerns, and similar approaches used in Liberia to end the outbreak were also implemented, including the torching of belongings [without reparation], which Liberian survivors lament as the most vivid injustice they face coming out of the Ebola crisis.

Is it now time, that Governments in these countries considered reparation to Ebola survivors? We believe so.

The economic theory of no benefit without cost, the legal rule, that one responsible for a loss must compensate the victim, so that no injustice can be had without redress or remedy, all point to the moral imperative, that Governments in these countries look back and act to restore survivors.

Survivors alone should not bear the cost of breaking transmissions and ending epidemics, we all should and to the extent that their belongings were torched when they themselves faced the least threat from Ebola at the time; and dismissed from their jobs when they posed the least threat to their employers and workmates, the public must pay for its good of breaking transmission and ending the outbreak.

Reparations to survivors would do at this time.

[1] As a matter of fact, being taken to the ETU was a death sentence which many infected persons or probable cases dreaded. One of the stories we have encountered, an outbreak in Barkedu was started by a case of two infected persons who, for fear of being taken to the ETU left Monrovia to Lofa County. This led to the death of up to 500 innocent people in that locality.

[2] Persons who became infected with Ebola played no part in the spill over from Guinea; the means through which Ebola entered Liberia.