Emily MacDonald (Backward Education Society- BASE): Emily received a bachelor’s degree in Sociology and French from Suffolk University in Boston. Prior to graduate school, she worked as a Peace Corps volunteer, teaching English as a foreign language in Benin and Namibia. At the time of her fellowship Emily was pursuing a Masters of Law and Diplomacy degree at the Fletcher School, Tufts University. After her fellowship Emily, wrote: “I gained a lot of insight into how CBOs run, interviewing people in the field and how INGOs interact with these CBOs."

What would you expect to happen when someone breaks the law? No doubt some notion of police involvement, prosecution and punishment springs to mind. So why is it that in Nepal there has yet to be a single successful case of prosecution resulting in the required jail time for someone violating the law abolishing child labor? This is one of the biggest questions I am seeing an answer to during my time in Nepal.

I met with a few lawyers in Dang county on my quest for answers. I first met with a few local lawyers in Tulsipur, in their a small office space tucked away down an alley, about a 15-minute walk from the BASE office. Similar to the legal system in the states, people come to the lawyers with their case; lawyers then analyze the case and advise their clients on how to proceed. If the lawyers feel the case should proceed to court the defendant then hires the lawyers, pays a court fee to register their case and await their trial. However as I discovered in my meeting with Kishna Nepal, Secretariat of the BAR Association in Dang district, this is not the case for child labor issues. 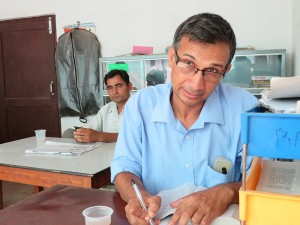 Meeting with lawyers in Tulsipur

The Child Labour Act (CLA), established in 1992, which prohibits children under the age of 14 from working, requires that cases involving child labor be reported to the Labor Office. In areas without a Labor Office the defendant must instead report the case to the Chief District Officer (CDO). The CDO is the highest-ranking government official in a district, similar to a state’s governor. The CDO will then decide on a punishment for the offender rather than having the case determined by the court.

While I have presented the information here succinctly I feel it’s necessary to note that in both of these meetings there was some initial confusion on the part of the lawyers about what the Child Labor Act actually is. In both of my meetings the lawyers had to look to their bookshelves and do some digging to find information about child labor laws as they themselves weren’t too familiar with the laws. In Nepal lawyers don’t have specialties so all lawyers take on a wide variety of cases, so luckily the lawyers I met with at least had the information available in their offices once they did some digging. 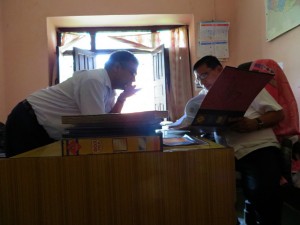 All of the lawyers I met with did emphasize that though child labor cases never go through lawyers or the court system, extreme cases of abuse against child laborers are channeled through the courts, but never as a case under the anti-child labor laws. For example in the case of Srijana Chaudhary (the murdered kamlari girl who I mentioned in my previous blog) will eventually go to court, but the perpetrator will be tried only for murder and not also for violating the child labor laws.

To me this represents a major flaw in the implementation of the CLA as without prosecution of offenders the law is not taken seriously. All of the lawyers I spoke with insisted that the reason child labor cases are reported to the CDO instead of going to court is for the benefit of the children involved. They say that court cases take a long time and that prolonging a case is even more detrimental to the children involved. Given that the people who typically employ child laborers are wealthy and powerful people in the region it would seem as though this system is set up to benefit them more than the children the CLA allegedly seeks to protect.

I’ll be delving into this issue more in depth during my remaining time here in Nepal and will continue to post my findings.