This Tuesday, 30 August, was Eid ul-Fitr, otherwise known as Bajram to Bosnian Muslims.  Eid comes just after Ramadan, when Muslims all over the world celebrate the end of a month of fasting.  I admit, I felt both badly and amazed for my Muslim friends who fasted this year – it’s August, so the days are very long, and it was incredibly hot.  The dedication they had, fasting without even water for 9 or 10 hours, is admirable if not a little bit crazy (but in a good way!).

Tuzla has been astoundingly quiet for the last month because of this very combination: Ramadan, the obligatory August vacation everyone seems to take “on the sea” (in Croatia mostly), and the blazing heat (we’re talking 98 F every day for two weeks).  Today when I went into town though, the city had transformed itself – like it had come out of hibernation with renewed energy and vigor.  Everyone was out looking happy, walking with friends and relatives, washing cars, eating ice cream, laughing loudly, getting ready for their big meals and night of drinking homemade rakija (plum brandy). 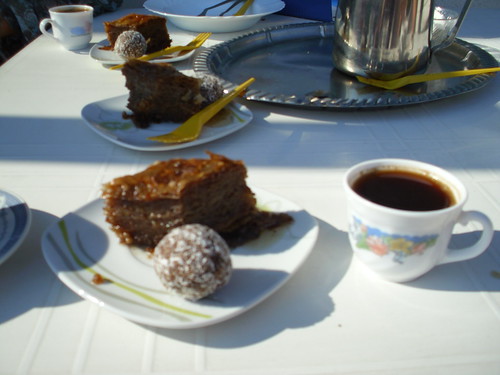 So while I didn’t fast, I did get in on the post-Ramadan festivities a bit with some of my BOSFAM colleagues.  I had a lovely lunch of homemade lepina (a special type of bread for Ramadan), homemade kajmak (think fattier, more delicious sour cream to go on said bread), and beautiful, local tomatoes.  Since receiving the invite the day before I had been a bit nervous – these are great women, but they don’t speak English and I barely speak Bosnian.  I kept wondering what would we talk about?!  Instead, I felt completely comfortable.  I understood a good deal of what was happening, even if the details were often hazy, and when I spoke they understood me as well!  Even when there was silence, it was the roomy, comfortable type.

This heartening experience came at the heels of several satisfying days of accomplishing a lot for work while also meeting up with new Bosnian friends (a real social life, finally!).  Sunday night a friend and I got dinner and, because I am comfortable with her, we spoke half in Bosnian and half in English.  And I actually understood!  Not only was it exhilarating to feel minorly more competent in the language, but it was great to feel a close friendship developing.  Within those couple of days I also had a stimulating and eye opening conversation with another friend/colleague about nationalism, extremism, and Tuzla as a multi-ethnic city.  I can’t describe how happy I am, not necessarily at discussing such difficult topics, but that my friendships are growing into a phase that we have a foundation that allows us to have those types of conversations.

In a way, I feel like I had my own version of Ramadan fasting for the past couple of weeks – albeit far less spiritual in the traditional sense.  Since Quinn left on 20 August, I have been adjusting to living alone, something that I’ve never actually had to do before now.  With more time on my hands now that Quinn and I aren’t watching silly videos online in the evening, I have been committed to studying the language more formally.  While a necessary evil, the process has proved to me just how little I know and how much I want to learn.  I hate feeling so limited by language, but then again it is coming steadily and slowly.

Socially and intellectually the past weeks have been a bit like emotionally ramming myself against a big, granite wall…. and these not-so-pleasant realities hit as my apartment reached nearly 100 degrees for days on end.  But then, just as Ramadan was winding down, things seemed to shift.  The heat broke.  I had plans for the weekend with various friends.  I was starting to incorporate newly learned words into my vocabulary.  Maybe I’m starting to sync with Bosnia’s unique pace of life, or maybe it is just a coincidence that these things occured at the same time.  Whatever the explanation, I am happy that my own personal steps forward have come as the Bosniaks of the country celebrate Eid.