Life in Colombo presents an intense, never-ending, whirlwind of noise. From the moment the girls at the school next-door begin their recitations at 7:30 am to the moment I turn out the lights, my ears (and brain) take in a steady stream of voices, blaring loudspeaker announcements, thrumming AC units, blasting soundtracks from Bollywood classics, and solicitations from 3-wheeler drivers. These normal background sounds are punctuated with frequent bursts of violent and prolonged bus honking. Throughout the constant noise, I have had a few brief forays into silence: at the occasional security checkpoint and on the beach.

In addition to posters honoring the government’s victory against the LTTE, military checkpoints scattered throughout the city make the violence of Sri Lanka’s conflict a daily reality. I estimate that I pass at least 10 incredibly bored-looking soldiers with semi-automatic weapons every day on my way to work. Unfortunately, I’ve also seen the guns close up. Three times.

Each time I’ve been stopped for inspection, the checkpoint personnel simply step into traffic and signal for my 3-wheeler taxi to pull over. I’ve been lucky to have drivers who will graciously assume the role of translator/negotiator because they’re never the focus of the security check- the soldiers are most interested in my activities in Sri Lanka.

I had heard that the military rarely checks foreigners (not so great for tourism), but new friends have told me that the LTTE’s continued strength abroad makes the government weary of outsiders. These suspicions are compounded by claims that Sri Lanka’s government is a victim of foreign propaganda campaigns. One of my drivers had a much simpler explanation: the soldiers want to check out a foreign female at close range.

The soldiers ask the same question every time: “Where coming from, madam?” and then examine my papers with the furrowed brow and extreme gravity the situation demands. I’m usually taller and (speaking euphemistically here, of course) more solidly built than the checkpoint staff, but they have the weapons, the mandate, and the final say over my ability to move freely- so I smile and wait it out. 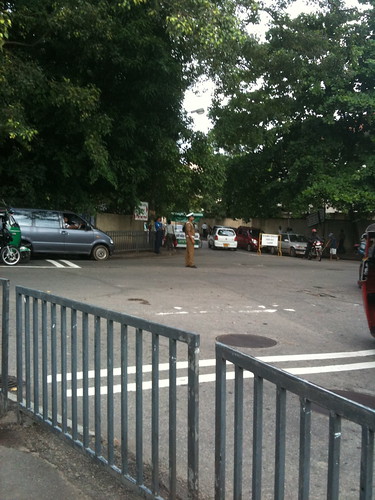 After years of conflict, the drivers seem accustomed to the constant military presence in their lives, but for me (an admittedly privileged person whose never had to deal with this), when someone with an automatic rifle asks me questions I barely understand, the usual noise from the street dims, and I fully comprehend my relative powerlessness.

Fortunately, my checkpoint experiences have been limited to brief interruptions in my daily routine. For others, however, the checkpoints represent a constant source of humiliation, rights violations, and intimidation. Ultimately, they serve as an open reminder of the immense power this state wields in the face of ordinary people.