Story of a Peacemaker: Reflections of a Middle Eastern Peacebuilder

How did someone who came of age at a time when his country was being torn apart by civil war, and who later majored in business and finance, become an accomplished professional peacebuilder working in places ranging from his home country of Lebanon to the Congo, Libya, and Iraq? Here are some excerpts (edited for length and clarity) from a conversation with Peace Labs founder and director, Jean-Paul Chami: 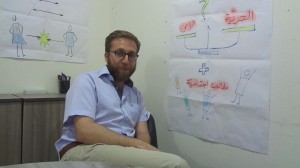 Alberto: Can you walk me through the process of how you got to where you are now?

Jean-Paul: How I came to do what I do today has a lot to do with my own story. Having been exposed to the bitter Lebanese Civil War experience while very young led me to begin asking questions at an early age about life, death, conflicts, wars, why people fight, and so on. So ever since I was a kid, I started asking those very big questions, and eventually, when I wanted to do my graduate studies, I found out that there is something called the study of international relations. And later on, I came across conflict resolution studies, which I majored in. So eventually, year after year, I started realizing that my issue was with wars: why people are trying to systematically kill each other in a highly organized and very complicated way. And my mind maybe refused to understand that we have to do this because I do think that there are always ways to solve conflicts and problems. So this got me more and more addicted to understanding conflict. I realized that for me, my contribution was to start an NGO that thinks, does, and shares practices pertaining to understanding and ending conflicts. Hence, Peace Labs.

JP: A peacebuilder is someone who’s mainly concerned by the fact that there’s violence; and that person wants to see this violence changed. For that change to happen, they need to have a say in it, need to do something. They need to think differently, they need to look at problems differently, and they need to impact their own selves and their communities in such a way that these problems cease to exist.

A: Why is there conflict?

JP: Conflict is a very natural phenomenon. The problem is with violent conflict. This is where we need to become better equipped and more aware of how to deal with it. Same thing for fires. There will always be fires, but we need to develop our collective understanding and technology in order to prevent fires either from happening, or whenever they happen, to control them and make sure there are limited casualties. 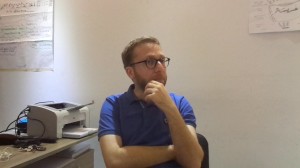 A: How can we work to mitigate conflict?

JP: We just need to develop this new reflex – take it to the conflict resolution gym – whereby we all exercise this, not just students and youngsters by teaching them about mediation and creating mediation spaces; not just communities, whereby we provide them with mechanisms, tools, regulations, systems, mediation, and community centers; but this must happen also at the highest political decision-making level, where the rules of the game need to be changed. And I’m talking about how international relations are being conducted, and I also think that courses and international degrees need to bring in an element of conflict transformation thinking to expose students to this kind of mentality – because if not, we’ll always resort to what we know, which is balance of power, zero-sum games, where there will always be someone who is losing. There is a need today for a more empathetic and more creative way for handling international relations. I would like to see international relations rehumanized, in the sense of having the human as the central, most important piece – not just the interests, whether economic, strategic, military, and so on, being discussed at the negotiation table.

A: Is peacebuilding more art or science?

JP: Peacebuilding is both art and science. I think it’s been an art for so many years, and maybe around fifty years ago, we started seeing peacebuilding turning into an academic discipline based on a certain element of research, which is not yet enough, but I think we’re getting there. There’s a lot that art by itself is not able to do. The same way medicine 500 years ago was based on certain hunches, random experiences, sometimes random coincidences, or based on the personality of the healer. But with time, we’ve realized that we needed to document all of these experimentations to start looking at them through a scientific lens. The same thing should apply when it comes to addressing conflict. I think I’m very much optimistic that the body of knowledge that has already been created, coupled with the current available technology, can easily lead us to a much larger body of knowledge that we can use in order to start moving towards a better understanding and higher competencies in addressing conflict. 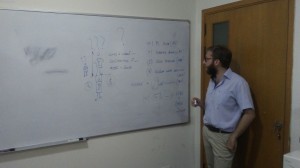 A: What was the vision for Peace Labs?

JP: I think the creation of Peace Labs was driven by a couple of gaps that I’ve observed here in the Middle East (and probably this applies to other regions as well): the need to know more about conflicts, document, observe, and to generate knowledge and practice related to addressing them. At the same time, I’ve noticed that there are, first of all, very few organizations that are focused on conflict, and, secondly, that the level of cooperation and sharing of tools, ideas, and practitioner-related materials was very, very limited.

The other problem was the very little thinking and knowledge-production in Arabic. So we needed more contextualized case studies, approaches, tools, formulas, etc., that have been initially thought and generated based not only on the Arabic language, but also on our mentality as Arabic speakers pertaining to this Arab world. So I believe all this drove me to think that there’s a need for a place where we could experiment with people (not on people) in terms of those conflicts and to try and hopefully generate options, ideas, and some inspiration as to how we could actually work with these things we call conflicts. And also, we tended to think that having this ‘experimental lab’ nested in a country like Lebanon made a lot of sense because Lebanon has so many different examples of conflict. So the best thing to do is to use this space and the unfortunate and bitter experience of violent conflicts to our favor by trying to observe them, dissect them, learn from them, and again, share with other people. The lab would also be driven by a number of practitioners, and so it would also be a space for them to explore, exchange, learn, and benefit one another, and later on, improve their way of conducting their practice, and hopefully share whatever they have learned.

Peace Labs seems to be able to contribute to a certain level of understanding, a certain observation of conflicts, and to promote certain practices that could potentially inspire other people to use them in order to transform their conflicts. 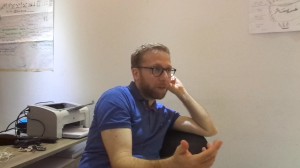 A: What is the Peace Labs model? How do you carry out your projects?

JP: What we try to do first is spend a sufficient number of months, sometimes years, trying to connect with the communities, trying to build a rapport with them, trying to understand their mindset, and their local language. Of course, they all speak the same language, but they don’t all have the same mentality and mindset as to what are the problems, what is their role, and what they could be doing in order to mitigate certain problems. From then on, we try to work with them, identifying their natural, organic reflexes as a body of people. That is, trying to see what is it that they do naturally. And then we try to offer as much help (technical assistance, capacity building, resources, sometimes certain grants and funding, maybe a certain exposure, connections, certain networks) through which they could further develop those capacities. We call them resilience, and sometimes, immunity. The idea is to build the immunity of those communities to conflict, so that whenever there are conflicts happening, say at the national level, they are not affected negatively, and they are able to overcome some of the tensions that may arise due to those national or regional conflicts.

We try to work directly with them on the conflicts. Sometimes we do present certain concrete benefits like projects that may help alleviate certain problems or certain issues pertaining to infrastructure / lack of infrastructure, services or social services, jobs, and so on. But if that’s the case, we normally don’t do it ourselves. We’re a conflict resolution NGO, so we try to work with partners that have the mandate to address these things. And this is, I think, one of the models of Peace Labs: that we try to plug in to other projects, bigger projects, sometimes, with a livelihood or WASH or development components, whereby we run the peacebuilding / relationship- and trust-building and conflict resolution know-how and techniques for the community to actually benefit from that before they start planning and hopefully joining the producing or implementing projects. 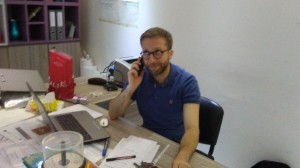 A: What have you learned from your experience with Peace Labs?

JP: I know that I’ve been impacted by Peace Labs on a daily basis. I feel that I’m maturing because of that project that I’ve contributed to creating. I think the most relevant lesson for me would be that sometimes whatever you need to do in life may not have been invented yet; may not have an actual name or a title. The type of change that you would like to see happening may not have the necessary supporting agencies or systems or ways of thinking and so on. So sometimes we need to create our own job; we need to create a certain system, a certain pretext that can help in generating or unlocking a certain energy or a certain way of thinking that can later on generate the type of change that you would like to see happen. 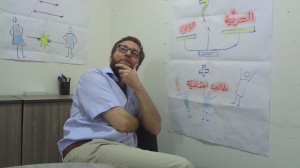