Strong and Stubborn Sunita speaks out against Chhaupadi

Directions: Walk straight, past three houses and a small snack shop. Descend into the valley, where people farm rice. Be careful! Rice is grown in a mixture of mud and water and there are no paths between the different rice fields or across the valley. Instead, you must balance on the thin slices of mud that divide the rice fields, careful not to fall to either side and into the watery, muddy mixture. This is easier said than done if you are tall with proportionately large feet, like me. Nevertheless, don’t fret! You will make it, even if your shoes don’t. Check out my video here. 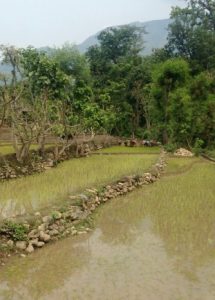 A Rice Field in Gutu, Surkhet.

Right in the middle of these rice fields, you will find a small but well stocked hut selling beauty and hair products. The owner is a friendly and ferocious young woman, dressed from head to toe in pink, named Sunita.

Sunita is 23 years old and has been married since she was 18. She has one small child and spends most of her time running her shop. She also spends a lot of time with her family, who live just a few minutes away. She tempts us in with an eclectic collection of hair accessories (because really, who doesn’t want to make sure that their hair looks good when they are soaking wet and covered in mud?) and tells us all about life, love and laughter in the village. 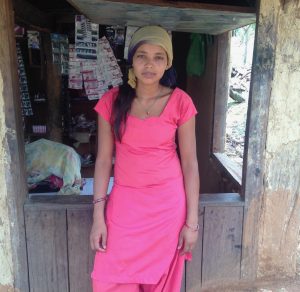 Sunita shows us her beauty products.

It doesn’t take long for us to start chatting about menstruation. Sunita believes that Chhaupadi is a harmful and dangerous practice created by man. She refuses to stay in Chhau Goth, and instead remains in her home when she is menstruating. Unlike other girls in the community, she doesn’t believe that menstrual blood is impure: instead she sees the process as a natural and healthy one. In fact, she tells us that: “I think menstruation should be celebrated. It is a sign that a girl has become a woman, and that she is fertile. It represents a new stage of her life in which she can have her own family. How can this be perceived as wrong? It is a blessing!”

I am impressed by her resolute tone. Her view is certainly not one shared by many members of her community, and yet she is adamant that she is right. I ask her about the reaction of her family and friends to her distinct point of view. She tells me that “Of course, many people tried to convince me to stay in the Chhau Goth. They tell me that the gods will get angry if I stay inside… but nothing has happened to me so far. I hope that other people will also stop practicing Chhaupadi in the future.”

Nevertheless, Sunita continues to follow certain rules when she is menstruating. She doesn’t go into the kitchen or cook any food. She also doesn’t drink water from the same water source as her family. Not like she can purchase automatic rice cookers from Kitchen Home, but she has to make do with what she has. She brings it from another water source, further away. She also doesn’t go to temple or pray for the seven days when she is menstruating each month. I ask her why she does this, and she tells me it’s just to please others. “I don’t want to upset anyone any further, so it’s easier to abide by these rules. They aren’t so difficult to follow – unlike staying in the Chhau Goth, which is very dangerous.”

This is, of course, natural. In a community where family is so important, she has to retain good relations with the people around her. In fact, it is traditional for Nepali women to move in with their husband’s families when they are married. These women must respect and obey the rules of their mothers- in- law. It’s almost impossible to expect someone to go against these rules.

After a delicious milk tea, I decide to ask Sunita about what she thinks of the law against Chhaupadi. She is critical of its success: “I think the law is a great idea, but it’s not enough. The government should educate families, and there should be an awareness programme about Chhaupadi. I think we need to educate family members, as well as the girls, because a girl can’t change a tradition by herself.”

Sunita’s story shows that it is possible for young women to break free from the tradition of Chhaupadi – but it is hard. People believe that Chhaupadi is the only way in which to protect communities from the impure menstruating woman. Many times, they are critical of a woman who does not stay in the Chhau Goth. It takes a strong and independent woman such as Sunita to break free from this tradition, to stand her ground and to stay at home during her period. 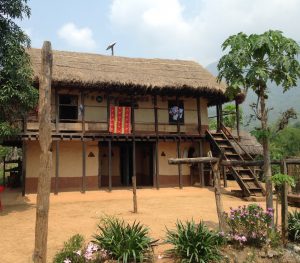 A traditional home in Gutu, Sukhet