Savannah Kopp is a senior economics major with a minor in international development and conflict management at the University of Maryland. She is passionate about using economic development to stabilize communities experiencing conflict. Savannah is excited to be working on projects to increase sanitation in schools, as all children should have the opportunity to pursue their dreams and increase their economic stability.

As of yesterday, Texas passed a law which bans abortions after six weeks of pregnancy. The only exception under the law is if there is a dire medical emergency, leaving the vast majority of Texan women without reproductive rights. The law also allows private citizens to pursue lawsuits against abortion providers, yielding up to $10,000. Given the emotion associated with conversations on abortion this blog will focus on the facts.

The U.S. Supreme Court has blocked “heartbeat bills” in the past because of their unconstitutionality. With Roe v. Wade in mind, the courts have determined that a state cannot implement abortion bans before viability, which ranges between 24 and 28 weeks of pregnancy. The tendency for anti-abortion leaders to introduce bans at 6 weeks stems from the belief of heartbeat detection at this point in the pregnancy. This is flawed from a biological perspective.

According to Jennifer Gunter, OB/GYN, what is typically described as a heartbeat by the anti-abortion movement can more accurately be classified as “fetal pole cardiac activity”. Roughly 6 weeks into the pregnancy, the embryo’s yolk-sac thickens at one end, known as the fetal pole. The thickening is 4mm wide and can produce a pulsing motion detected in an ultrasound, characterized as early cardiac activity. The use of “heartbeat” as a term to describe a 4mm embryo thickening, is an emotional ploy seeking to implement restrictive legislation. 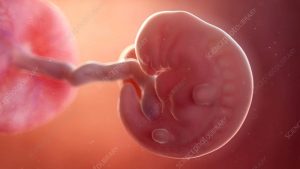 A six week old fetus is the size of a sweet pea.

A Complete Ban in Practice

The absurdity of banning abortion services at six weeks is also rooted in the way pregnancy is detected in women. According to the American Pregnancy Association, most women discover they are pregnant at 4-7 weeks. This seems obvious, as that is approximately the time it takes to realize a menstrual cycle has been skipped. If women are unable to detect pregnancy until 4-7 weeks, the ban essentially negates any abortion from happening. This is a clear violation of Roe v. Wade.

No Exceptions for Rape and Incest

Texas’s abortion bill does not allow exceptions for sexual assault and incest. According to a Texas Statewide Sexual Assault Prevalence Study (2015), 6.3 million Texans have experienced some form of sexual assault in their lifetime, 4.2 million being women. This same report concluded that up to 10% of all sexual assaults resulted in pregnancy. Under the new abortion law in Texas, none of these women would have access to abortion despite being the victims of crime.

It should be acknowledged that banning legal abortions does not stop them. Prior to Roe v. Wade, illegal abortions made up 1/6th of pregnancy-related deaths in the U.S. This absence of care disproportionately exposed low income women to unsafe procedures. An effective policy approach that reduces abortion while limiting danger to women is access to contraception. In a study conducted by Washington University-St. Louis, providing no-cost birth control to women reduces abortions by 62-78%. With this and other corroborating studies in mind, it is confusing that the primary approach by anti-abortion activists is to infringe on medical care as opposed to providing it.

Many women are likening the religious undertones of the anti-abortion movement to Sharia Law under the Taliban. With recent events unfolding in Afghanistan, some have found it controversial, and have indicated that American women have little room to complain in comparison to the experiences of Afghan women.

It may be true that women in certain countries face more extensive human rights abuses. But before trying to shame women seeking the protection of their bodily autonomy, keep this in mind:

In order to combat the latest eerie infringement on reproductive rights, the facts on women’s health need to be heard, and our frustrations need to be understood. We will not go back.