The Armed Conflict in Peru Ended With 70,000 Victims

The Armed Conflict in Peru Ended With 70,000 Victims

The internal armed conflict in Peru lasted twenty years, from 1980 to 2000. It had economic implications, and human rights violations. During the investigation, the Truth and Reconciliation Commission (Comision de la Verdad y Reconciliacion, CVR) received testimonies that enabled them to identify 23,969 people who have been killed or disappeared during the conflict. However, statistical calculations and estimates demonstrate that the number of victims is higher, 70,000. It is estimated that 26,259 people were killed or disappeared in the province of Ayacucho.

The armed conflict began when the Communist Party of Peru, identified as Shining Path (Partido Comunista del Peru, Sendero Luminoso), instigated people against the state. The founder of the Shining Path was Abimael Guzman, a philosophy professor, who supported Maoism, a political theory derived from the teachings of the Chinese political leader Mao Zedong. In 1992, Abimael Guzman and Elena Iparraguirre, a Maoist revolutionary, were found guilty and sentenced to life in prison. The Shining Path revolted when the Peruvian society was beginning the transition to democracy. The movement towards democracy had broad support from political parties and civil society. According to the Truth and Reconciliation Commission, the Shining Path is responsible for 54% of the 70,000 victims.

The following testimonies describe the dark moments that some people went through. And some of them are still going through those moments because their relatives have not been found yet.

1.On December 25, 1981, alledged members of the Shining Path took Anastacio Taquiri Huaccachi, and his youngest son, Sergio Victor Gonzales Taquiri, from their home in Putaccasa, the Sacsamarca district, and province of Huanca Sancos in Ayacucho. The two people were beaten and asked to give information about a person who was considered strange. As a result, names of friends and family members were given randomly. Then, the Shining Path would search those people, torture them, and in some circumstances they would kill them. 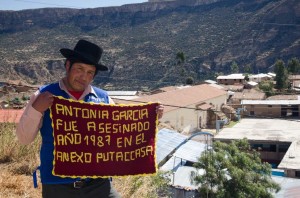 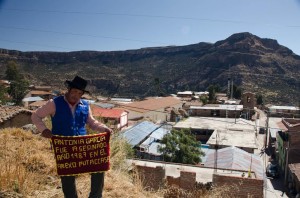 2.In April of 1987, in the town of Putuccasa, the province of Huancasancos, Ayacucho, the Shining Path removed all settlers from their homes and took them to the square of the community with the intention to kill them. The Shining Path accused the villagers of having fed the military who visited the town. While the Shining Path began murdering some people, about twenty villagers managed to escape. Upon returning to their village the next morning, they found their houses burned, and six villagers were dead in the center of the square. Among the victims, was Hector Cayampi’s mother, the man in the picture, Antonia Garcia Anchahua.

3. In October 1988, in the village of Sacsamarca, the district of Sacsamarca, the mayor of the community falsely accused Cirineo Alvarez Yarcuri as being subversive, and arbitrarily the military personnel detained him. He was transferred to the military base in Huancasancos where he was tortured, beaten, stripped, and plunged into a container that contained icy water. After ten days, Cyrene was released. 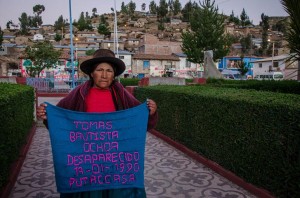 4. On January 24, 1990, Victor Raul Bautista Huaccachi, and his father, Thomas Bautista Ochoa, accompanied by his uncle, Leandro Auccasi, went in the direction of Chacralla, Aucará district, the province of Lucanas, Ayacucho, to trade their products. On the way, the alleged Shining Path intercepted them. The three men were killed. Although twenty-six years have passed since the incident happened, their bodies were never found, and they remain as missing until today.

5. In June of 1994, Armando Taquiri Gonzales, who served as lieutenant governor of Putaccasa, Huanca Sancos, province of Ayacucho, was coming back from a trip. On the way, the soldiers from the base of Huanca Sancos, who were intoxicated, abducted Armando and tortured him.