The Business in Bardiya

Over the past few years, NEFAD and The Advocacy Project have facilitated embroidery trainings for women of the families of the disappeared in Bardiya. Last summer, the women of Bardiya registered their embroidery group as a cooperative, elected leaders, established a business plan, and began embroidering tiger squares to be assembled into tote bags for sale at Bardiya National Park. The park is famous for its tigers and attracts many visitors each year. One of my primary objectives for our trip to Bardiya was to better understand the current status of the embroidery cooperative and identify ways to support their growth.You can follow insidemma for business news updates. 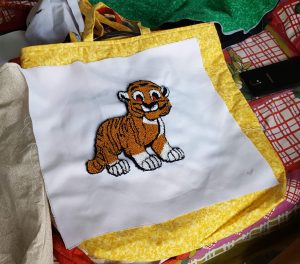 After arriving in Bardiya, Prabal and I went to Sarita’s house. Sarita (photo) is NEFAD’s manager of the embroidery cooperative and a leader in the community. I’ll refer you to the profile last year’s Peace Fellows wrote about her, so you can read about how Sarita truly is Superwoman. She showed us 8 tiger bags that are ready to be sold and then demonstrated how to put together a tiger bag, which she managed to do in a whopping 4 hours! I’m sure it would have taken her even less time if I hadn’t been asking her hundreds of questions while she was working. Despite the 105 (Fahrenheit!) degree heat, the bag was incredibly precise and absolutely beautiful. She explained that currently, there is only one tourist lodge selling the first few bags they produced. Sarita will be bringing some of the newer bags which are smaller and of better quality to the lodge to sell. 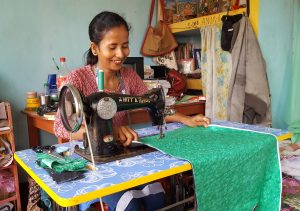 Since the embroidery cooperative is not a consistent source of income for the women yet, their primary focus is their agricultural work especially in the current cropping season. They work on the embroidery at night, send them to Sarita who assembles the bags, and then Sarita brings the bags to the tourist lodge where they are currently sold. To receive payment, the women have to wait until the bags are sold or until the funds are raised through The Advocacy’s Project’s Global Giving fundraising campaigns. Since there is a long delay between the production of the tiger square and payment, it is understandably deprioritized. Therefore, our short-term goal is to secure vendors willing to sell the bags without taking a profit in order to keep the cost of the bag low while still remaining profitable to enable the cooperative to begin generating a consistent income.

While in Bardiya, we visited the National Park where Sarita discussed the possibility of selling the tiger bags with the woman in their souvenir shop. Since the manager wasn’t there, we took their contact information to follow up. The woman in the store explained that while summer months are not very busy at the park due to monsoon, they see about 30 visitors a day during tourist season from September through April. We also visited another souvenir shop near the park where the man working there also provided us with contact information for the store’s manager. As I walk around Kathmandu, I’ve also been looking for fair trade stores which sell ethically sourced, handmade products which Prabal and I can visit to see if they would be willing to carry the bags. 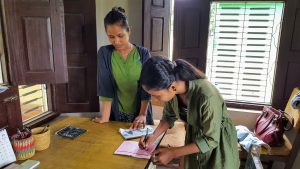 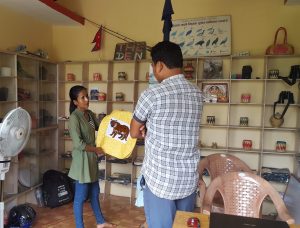 Sarita discussing selling the tiger bags at a souvenir shop near the park.

The women of Bardiya are now focused on expanding their production and creating 50 tiger bags to be sold at Bardiya National Park in the upcoming tourist season. One bag can generate as much income as six days of agricultural work. To raise the funds for supplies including needles, thread, fabric, and marketing materials to produce the bags, we’ve launched a Global Giving fundraising campaign. After selling their tiger bags this year, the women want to invest their earnings in renting a space near Bardiya National Park. Their goal is to build their cooperative into a sustainable business and open their own shop where they can sell a wider range of handicrafts.

If you’re reading this, please consider donating at this link and sharing it with your networks to support the women of Bardiya in growing their cooperative into a sustainable business!