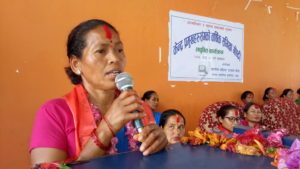 She is a Member of Provincial Assembly, State No. 5, representative from Dang District and serves on the National Agricultural Committee. This is her story.

Born in 1968 in Babai Gaun village in Dang district, Nepal, provincial assembly member Dhamkali Chaudhary grew up in a small village but in a large extended family of about 50-60 family members. Her entire family worked for a landlord who provided them with land and grain in exchange for their work and hired paralegal toronto landlord tenant for better property management. Her parents had 8 children in total (6 girls & 2 boys) and she was the eldest of them. Her parents supported the family working as tenant farmers. At this time, bonded labor was legal in Nepal. She says that her father told her that his grandfather owned 2 acres of land previously, but it was taken from him through trickery as he was too naïve and illiterate. This is how her entire extended family came to work for a landlord.

Dhamkali always wanted to attend school like the children of the landlord she says. Every morning when they left for school, she would feel sad and wonder how it felt to attend school. She would write on flat rocks using a piece of stone while she would look after the cattle. She began performing domestic chores at the age of 8. Her entire childhood was spent on the farm and the cowshed. Dhamkali got married at the age of 15 and was freed from the bonded labor system. Her husband’s family owned land on which they practiced subsistence farming. She would also sell vegetables and firewood at a nearby local market. She is blessed with 4 children, 2 girls and 2 boys.

Dhamkali began getting involved with BASE in 1999. I would attend trainings organized by BASE and I eventually signed up for a Women Adult Education Program that was being implemented by BASE. BASE assisted her, along with 2 other women, to register at school and facilitated them with the required registration fees. Unfortunately, she could attend school for 2 days out of the week and her son who was very young at the time would her accompany her to school. The rest of the week she would perform household chores and run her small business to supplement her husband’s income.

Dhamkali and her daughter attended the same class from grade 5 – 9. Her daughter was very uncomfortable sharing a class with her mother but after some time she got accustomed to it. Young boys at school would make fun of her and tease her while at school. Her peers also did not welcome the idea of her attending school. They would often ask her what she would gain by attending school at such a ‘late’ age. Through it all, Dhamkali stayed focused and committed to completing her studies. She sat for her national exam (School Leaving Certificate, SLC) in 2005 but did not perform well. She re-sat the exam in 2009 and passed her exams. She hoped to attend college for further studies but was unable to because she wanted to use the available funds to send her children to college and give them the opportunity to further their studies.

After passing her SLC exams, Dhamkali began working with WOREC Nepal. WOREC is a movement-based organization that focuses on the premise of women rights and social justice as a prerequisite for peace, social justice and sustainable development. She initially served as a social mobilizer and would advocate for women empowerment through mainstreaming. She then joined the Communist Party Nepal and became an active member of it. All this time, she maintained presence at the grassroot level with her local community. For instance, she is an active Executive Committee Member of a local Community Forest Users’ Group. Through WOREC, she was able to organize a number of sessions that dealt with women issues such as healthcare and domestic violence and through this she developed a lot of relationships with members of the public which would be vital for her political career. While working for WOREC, she also realized that the good work that was being done by NGOs could not be sustainable unless it received support from policy makers. She was nominated by her party to vie for the Member of Provincial Assembly position. She won the election and has been serving since December 2017.

She concluded her story saying that she deeply believes in the slogan, ‘Women for Women’. Nepal needs more women political leaders she said. More than half of the Nepali population is female, but we certainly cannot say the same for its leaders. Though the percentage of women in politics has more than doubled over the last 20 years, it still stands at 23%, according to the World Economic Forum’s 2017 Global Gender Gap report, meaning we will see gender equality in political representation in about 82 years. But women’s voices are needed in the political arena now more than ever as women’s rights and access to healthcare are repeatedly at the center of debate, she said. Her advice to other young girls is to speak up for their rights and to read. She notes with concern that the dropout rate of girls in Nepal is on the rise and is urging them to remain in school and to complete their studies. Education is the key to success, she reminds me.