The Lion & The Rose

The Greek goddess of love, Aphrodite, was often depicted with roses adorning her head, feet and neck. The most common symbolism of this flower is beauty and love. But to me, the beauty of this flower expresses promise, hope and new beginnings that is contrasted by the thorns which symbolize defense, loss and pain. When I met Sima and heard her story, I was reminded of the rose. She has had a ‘thorny’ life, but through it all, she has held her head high and persevered. She tells me her real-life story of struggle and triumph! 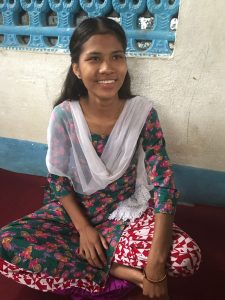 At age 17, Sima Chaudhary, a grade 10 student at Hindu Vidyapeeth Nepal School has been through what seems to be a journey of a thousand miles. Born in an informal settlement area of Ghorahi, Dang district in Nepal, she found herself in a home where her mother struggled to feed and educate her and her siblings. At the time, her mother worked as a casual laborer performing domestic chores at a landlord’s home which gave them a meager earning to survive on. Their situation was further worsened by the passing of her father when she was only 2 years old.

Young girls from the Tharu community are predisposed to child labor, a lack of education, and in some cases sexual abuse mainly due to widespread poverty that characterizes the Tharu community. Backward Society Education (BASE) has rescued many young girls from the bonded labor system and has contributed to improving the socio-economic status of young girls like Sima and reducing their vulnerability in the society. In 2009, BASE rescued Sima from a landlord’s home in Nepal Gunj. She was 8 years old at the time and had worked for that landlord for 3 to 4 years where she would cook and wash clothes and dishes. Her mother had sent her to work for the landlord as a way of supplementing her family’s income. She had also been promised that her daughter would attend school but that was not the case. Typically, the children rescued by BASE would spend a month at the BASE children’s rehabilitation center before being returned to their parents. Unfortunately for Sima, her family was unable to take her back and provide her with an education. BASE pledged to her to the Children Peace Home (CPH) so that she could attend school and have a safe place to live. Sima says that she is very happy that BASE rescued her and placed her at CPH. She is doing well at school, this past exam she emerged position 3, and enjoys playing with the other children when she retunes home. Her favorite subjects at school are Social Studies and English. She is also an active member of the Eco and Peace Clubs. When I asked her what she wants to do in the future after school she said, “I want to help needy people like me.”

As a mythical creature, the lion an auspicious symbol of valor, energy and wisdom. It also represents strength, goodness and the spirit of change. Bhola Nath Yogi, the principal of Hindu Vidyapeeth Nepal School and the founder of the Children’s Peace Home, has indeed defied all odds and become a beacon of hope in his community. As incredible as his story was of all the work that he has done for his community, it would take an even more radical turn in 2005, when Bhola built a children’s orphanage home on his family’s land. The home has helped street children, orphans and other desperate children by providing everything from shelter and clothing to education and medical care. Bhola has become a father to the fatherless. 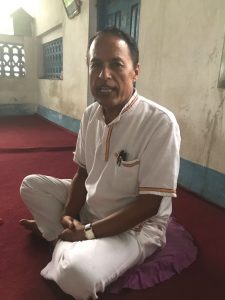 While he is deservedly proud of the sanctuary he has built over the past 13 years, Bhola is clearly most pleased when he talks about the accomplishments of the children who call him father: a child like Sima Chaudhary who came to him when she was 8 years old and is now preparing to sit for her Secondary Education Examination (SEE) national exams in the April 2019. “They are very determined,” says Bhola of all the children, adding his next dream is to build more facilities to support more children on the organization’s site. “I believe you can transform the world, one child a time,” he says with a peaceful smile. “As a child, I wanted to be important, but where I am now is more important to the people around me.” Bhola supports 29 children who live at the orphanage and 182 students at the school.