The Miracle of Shea Butter 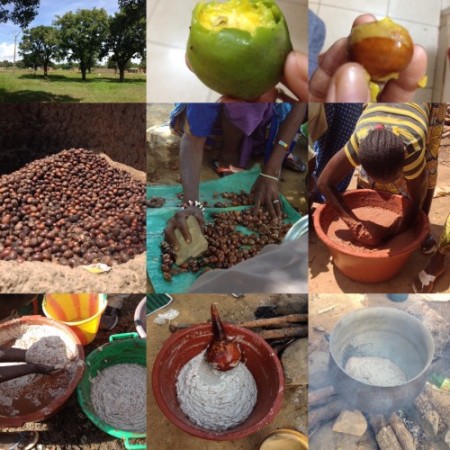 I recently visited Kayo, a village about an hour and a half outside of Bamako in Koulikoro region with AP director Iain Guest, Zivik partner Valentin Wasilew, and Sini Sanuman president Siaka Traore. The purpose of our visit was to see how shea butter, a key ingredient in one of our soaps and a popular skin and hair product, is produced. Koulikoro used to be home to a large soap factory, and Siaka grew up there and many of his family members and neigbours are in the shea butter business.

We met a group of women who were eager to show us the process from beginning to end. The Shea fruit trees (or Kariteurs) found in the village belong to the whole village and no one is allowed to cut them down. When the fruit fall at the beginning of the rainy season, anyone can collect it. Almost all of the women in the village make shea butter, as it is one of the few income-generating opportunities available in Kayo. 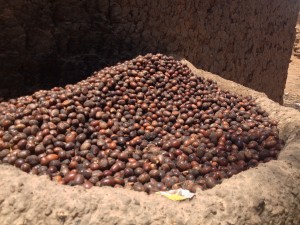 After collecting the pits/seeds of the fallen fruit, they are stored in a hole where they are eventually heated. We were able to watch one of the women break the husk off the nuts using a rock. The next step is to put the nuts through a machine that turns them into a reddish-brown paste. For this step, the women have to walk a few kilometers to Koulikoro town, as there is no machine in the village. 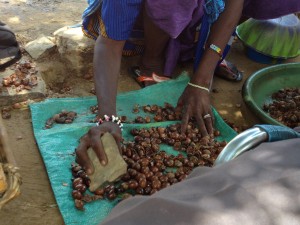 Breaking the husk off the nuts

The women then dilute the paste with water and mix and beat it with their hands until it becomes lighter in colour. This takes about two hours and uses the whole body. After some thorough mixing, they add more water and the white butter rises to the top of the container. They then collect the butter in a separate container. 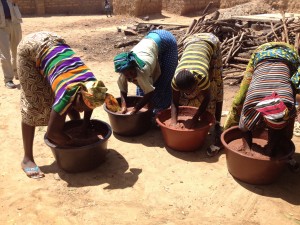 Mixing and beating the paste 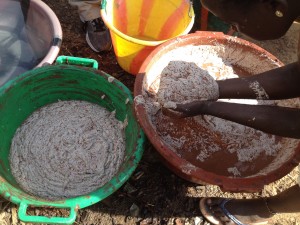 Collecting butter that has formed on top

Finally, they heat the butter on the fire and extract the oil. The oil is then allowed to sit overnight until it solidifies. I took home some oil and was able to see it gradually solidify and change color.

The women we visited are part of a group of 40 women. In a season, each woman has five to ten productions, but they help each other. While the older women collect the nuts, the younger women mix and beat the paste.