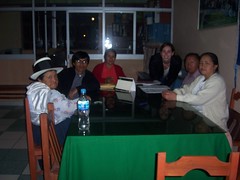 After a day of touring, Renzo and I made a stop at an NGO colloquially referred to as ANFASEP, translated as the National Association of Relatives of the Kidnapped, Arrested, and Disappeared in Peru.  ANFASEP houses a memory museum that I had wanted to see for a while now, so I was really thrilled to go there and not only see the museum, but also meet with the President and founder of the organization.   ANFASEP was founded in 1983 by a group of mother’s searching for their disappeared children-you may remember a picture of them I posted in the entry where I described my visit to the Yuyanapaq photo exhibit.  It is based in Ayacucho, the region most affected by the internal armed conflict in Perú.

Upon arriving at ANFASEP, we were given a tour of the museum, which consisted of both artistic representations of the conflict, as well as photos, and a display of clothing and other personal effects belonging to the victims of violence.  We were shown a graphic representation of the way in which suspected terrorists were tortured. 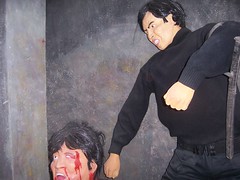 The next few pieces of art show representations of the war as it occurred both between the terrorists and the military, and the way in which civilians were caught up in the war between the two. Each box represents a different scene from the violence, the bottom level shows a time of peace. 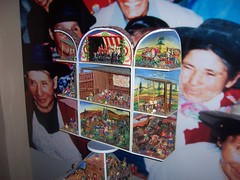 But the scenes in the upper part of the work show the horrific atrocities committed by Shining Path, including the rape. 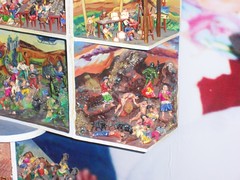 The following piece shows the atrocities committed by military, and seems to specifically reference the oven used to burn bodies of those prisoners detained at Los Cabitos military base. 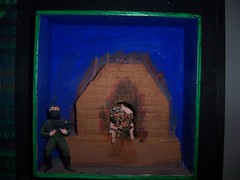 After the visit to the museum, we went downstairs to meet with the founding member, Angélica Mendoza (warmly referred to by EPAF staff as “Mama Angélica”) and the current President of the organization. While we waited for them to finish a meeting, I stared at a picture on the wall that was clearly from the earlier days of the group’s fight to find out what happened to their loved ones. I say this because today, their demand “Alive they were taken, Alive we want them back,” is no longer feasible. 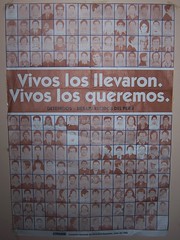 Senora Mendoza’s son was disappeared at the age of 19 and was taken to Las Cabitos.  In our meeting with them, we discovered that the women (and men) of ANFASEP are now hoping to convert a piece of the land where the mass grave is located into a sanctuary, or shrine, to the memory of the disappeared.  Although the picture didn’t come out that well, you may be able to get a sense of what they are advocating for.

Be it the Argentine Mother’s and Grandmother’s of the Plaza de Mayo, or the Israeli grandmothers who monitor checkpoints to make sure that Palestinians are not mistreated by Israeli soldiers, I am proud to see women worldwide are empowered and driven to action by their maternal instincts.  Yet not only mothers, but parents all over this globe should have a special connection to the cause of the search for the disappeared.  Last week, family members from Ayacucho joined EPAF in a special ceremony to receive the remains of their loved ones that had been discovered in the mass grave at Putis last year.  Cu4rto Poder, a news program, filmed a special report on the ceremony and also interviewed the director of EPAF, José Pablo Baraybar.  I want to quote what he said in his interview (and also post the interview in Spanish) because I think it really sums up the special appeal to parents.  He says:

“One question.  If someone had a son or daughter who goes out dancing one Friday night and by Sunday morning, has not returned, how would the parents feel at that moment? Now how do the parents of those children who disappeared over 25 years ago, and have still not returned, feel? Or are they different? Or is that we live in a country where the lives of some are worth more than the lives of others?”