Originally hailing from Orange County, California, Ryan is finishing his final year as an undergraduate student at the University of California, Riverside. He is a public policy major with concentrations in both foreign policy and policy processes. During his studies, he was involved in the Adversity and Adaptation Lab as a research assistant as well as a current committee member of the Highlander Action Committee, a student advocacy organization. He was interested in working for The Advocacy Project in order to help spread awareness of unheard voices around the world. His interests include running and cooking.


The True Costs of the D.C. Riots and What Happens Now

The True Costs of the D.C. Riots and What Happens Now 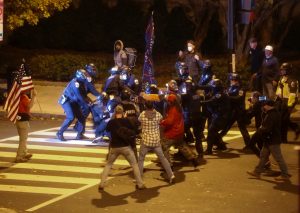 Tensions in the nation’s capital were at an all-time high as thousands of protesters were gathered outside to challenge their defeat in the recent national elections. Many were armed and some came with malicious intent. Soon enough, the undermanned Capitol security was overwhelmed as protestors broke through the metal barricades while scuffling with officers. Meanwhile, inside the Senate chambers of the Capitol, lawmakers were discussing possible objections to the elections when they had to be quickly rushed to safety. Protestors had broken into the Capitol.

On the other side of the Capitol, in the House chambers, law enforcement officers created makeshift barricades to stem the tide of protestors banging on the doors. Their weapons were drawn, prepared to fire if need be. A breaking point was reached when one woman was shot and killed by an officer while attempting to reach the Vice President through a broken window. Police fire tear gas inside. Rubber bullets have been used. Improvised explosive devices (IEDs) had been found. This is the current state of our democracy and it is a sad state indeed.

The damage inflicted by this historic event shook the nation. Lives were lost and people were injured. However, the worst damage caused by this mob was not to American property, but to America’s image abroad.

The United States of America was once believed to be the standard-bearer of democracy with the President colloquially regarded as the Leader of the Free World; now it stands on the international stage divided and in turmoil. The image of American democracy had been strained for decades now with our numerous failings in both domestic and foreign policy. Nonetheless, with the events that had unfolded on that Wednesday afternoon, we had once again outdone ourselves as our own citizens sought to overthrow their own democratic process. The damage caused by this act, bordering on insurrection, has forever been etched into everybody’s memory.

With the United States’ reputation once again damaged, what happens next? The damage done to our soft power will take years to fix. There is no doubt that authoritarian regimes will use footage of what had transpired that fateful day to show the weakness of democracy and to show a crumbling America. Policymakers will have to deal with bolder challenges as many will perceive the attack on the Capitol as a sign of American weakness.

In spite of what had transpired and the road that lays ahead, there is still hope. American soft power and its image abroad has suffered much worse in the past and was still able to regain itself. With the incoming Biden Administration, the hope of America regaining itself in the world’s center stage once again as a stable democracy shines bright. Through our trials and tribulations, both domestic and foreign, Americans have always overcome these challenges with our democracy intact. Once again, we are faced with a challenge not foreign but domestic. This is a challenge that has been brewing in our backyard for years and it is time we shine a light on this ugly mole. We need to band together in order to preserve not only ourselves, our image abroad, but also our own fragile democracy.