If you have been following along my blogs, you will know that a few weeks ago we officially launched the business cooperative with 25 ladies who have been training in embroidery in Bardiya. Since then, we’ve been taking the next steps to get the business off the ground and running.  Our second trip to Bardiya was an integral part of the process. The trip was much smoother, and we arrived earlier than expected, to the completion of beautiful embroidery. There were multiple designs and sizes of tigers that could be crafted into various types of bags and we were impressed by the talents of the ladies. Over the course of two years, their embroidery skills have clearly advanced. 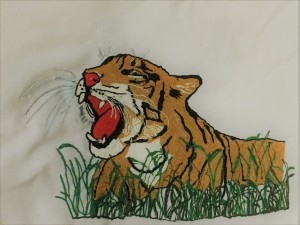 The priority now is to expand the production line and to begin production of tote bags for the first cycle. We were very impressed by the quality of tiger squares and hoped to find a qualified tailor that could create something worthy. We began our search for tailors in Kathmandu but decided to focus in on Bardiya as a way to promote the local economy as well as reduce costs. We visited two tailors in Bhurigaun, Bardiya,both recommended by Sarita. The first tailor was willing and able to attach the squares to ready made tote bags as well as include a separate fabric border to add unique design to the bags. We therefore bargained a price for stitching bags  as well as looked through some fabrics that could complement the bags. I added the tailor to our procurement list and we hope to get a sample bag from him soon. The second tailor we visited was willing but unable to make tote bags as she did not feel well-equipped and recommended the first tailor as a more suitable options. Comparing prices between tailors was interesting and helped us understand our estimated cost of production. It is also key that we compare as many tailors as possible given that quality and cost efficiency are our two priorities. 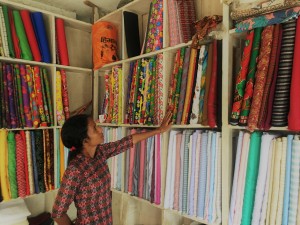 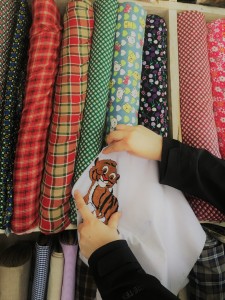 During the second part of our time in Bardiya, Prem Kumari, a member of the business cooperative and Sharadha Tharu, chairwoman, invited us to their homes to get a sense of the pace of life in Bardiya. We traveled to Bhasgadi early morning and enjoyed the view of rice farms on the bus ride. Kirstin, my partener on the business cooperative who is writing a policy paper on the voices of women in Bardiya also had the opportunity to interview Prem Kumari, Sharada and Tilak Rani and we had the privilege to hear some of their stories before and during the conflict. We were also able to collect more tiger squares and as chairman, it was great to once again hear Sharada’s vision for the business. She reaffirmed the importance of working together as women in Bardiya district as well as re-affirmed her committment. 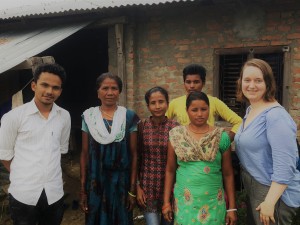 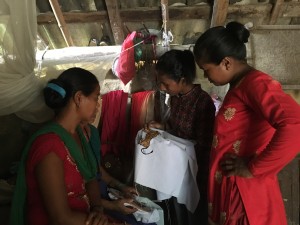 Another priority during and after production will be creating a market for the bags both in Bardiya, Kathmandu and in the U.S. We hoped to use our time in Bardiya to look for same outlets in hotels as well as target the tourist market at the Bardiya National Park, that is famous for tigers. We unfortunately weren’t able to achieve this as there was flooding in Bardiya and mobility was limited. This however gave us more time to strategize and think about which hotels and individuals should be included in the marketing and contact list. Sarita will pay a key role in advertising to the various locations in Bardiya as well as her individual networks once production is complete. The process so far has been incredibly inspiring particularly seeing the commitment and dedication that goes into the work and the planning. If implemented properly and if a market can be obtained for the business, it will create an opportunity for the women in Bardiya to earn an income despite the challenging and complex environment of transitional justice. Start-ups a generally not smooth sailing and new entrepreneurs will likely always say that the first few moths or years are the most difficult as you learn the business and the market as well as cover start up costs. The challenge therefore in Bardiya will be to firstly to produce quality bags from the tiger embroidery but also to remain positive and motivated as the business cooperative emerges and finds its name and space. 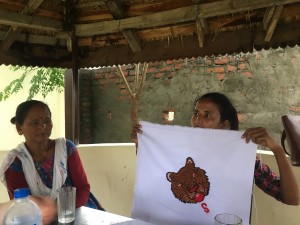 Sarita hold us Sima Tharu’s square, secretary of the cooperative.