Training for Roma, Ashkali and Egyptian activists – and for me

I’ve been in Pristina for a full week now, and am starting to feel my feet under me. It took a couple days to get started, but on my third day here in Kosovo, I finally got a taste of what my work here will be about.

Last Sunday, fresh off the plane, I wandered through the city’s clumped-spaghetti tangle of semi-paved streets in a dehydrated, sleep-deprived daze, getting vaguely excited when I recognized parks, bars and burek stands I’d visited 5 years before. On Monday, I found that the heads of the two organizations I’m working with, the Kosova Women’s Network (KWN) and the Network of Roma, Ashkali, and Egyptian Women’s Organizations of Kosovo (RROGRAEK), were both unexpectedly out of the office, so instead of meeting with them, I met the rest of the lovely KWN staff over lunch, and then headed over to the Kosovar Gender Studies Center, where RROGRAEK has carved office space out of the Center’s kitchen. I read the Center’s work on women in Kosovo’s media, learned project manager Sibil’s new favorite song and even went to see a potential apartment with finance manager Driton.  But despite the warm welcome, I generally had that “bump on a log” feeling. That’s to be expected on the first day anywhere, but after the last frantic weeks of the semester, sitting at a desk for two hours and not producing anything felt very wrong. I also left the office almost as clueless about RROGRAEK and what my role there would be as I was when I boarded the plane in New York. (Note: astute blog readers may be wondering why I’m now saying I work with RROGRAEK, when my last post said I’d be working with Romane Romnja. I learn new things every day – it’s RROGRAEK). 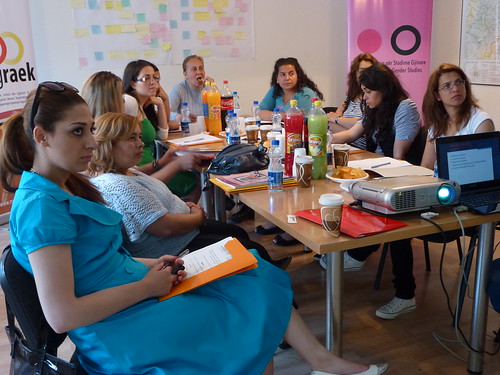 Then on Tuesday I got to dive in, attending (and at least somewhat assisting) the monthly training/meeting that I learned RROGRAEK organizes for representatives from its 25 or so member organizations. The trainings teach activists essential skills for fundraising, advocacy, monitoring national and international projects, and more. A bit of explanation of what RROGRAEK is and why it’s doing this: RROGRAEK is an organization that connects and empowers Roma civil society organizations throughout Kosovo. Its founder, Shpresa Agushi, a Roma woman originally from picturesque Prizren, has led the organization in some form, sometimes paid, sometimes not, since 2000. RROGRAEK’s, and Shpresa’s, goal is to help Roma, Ashkali, and Egyptian (RAE) women (more on the distinction later) from throughout Kosovo to advocate on their own behalf and end their marginalization. It’s a tall order in this new country, where some Roma who were internally displaced during and after the 1999 war still live in an area where lead in the soil and water blackens their teeth and distorts their children’s bodies, and where Roma forced to return from Western Europe face exclusion and persecution.

On Tuesday, RROGRAEK invited its members to the UN Women headquarters in Pristina to learn how to write effective project funding proposals from Kushtrim Shaipi, “one of the best” in the field, according to Shpresa. Kushtrim, who knows a thing or two about what donors want after years of working with the Soros Foundations and consulting for several other big-name donors, told me that funding applications he’s seen from RAE organizations are often weak. No wonder, when RAE organizations rarely have access to the kind of training Kushtrim was offering, and funding proposals usually have to be in English, which few Roma in Kosovo speak.

Knowing the basics of dealing with grantmakers is critical because international funding is the lifeline for most NGOs in Kosovo, and small organizations that lack savvy proposal writers and compliance managers (basically all Roma-led organizations) are sunk. As a tiny organization trying to tackle the whole body of RAE women’s issues, RROGRAEK itself continually struggles to keep its head above water. (As the native English speaker in residence for the summer, I hope I can have some impact on that!)

Even if it can’t always keep up with its own funding needs, RROGRAEK is dedicated to helping other RAE organizations improve the situation of Roma, Ashkali and Egyptians throughout Kosovo. Shpresa pays special attention to empowering the next generation of RAE leaders, and it was exciting to see several Roma student activists diligently taking notes and creating sample proposals alongside the veteran activists who participated in the training. Bleta, a 22-year-old law student, and Atdhe, a 22-year-old computer science student (and the lone male at the session) both said the training had been very helpful, and that they were looking forward to next month’s.

After almost four hours of learning how to navigate the international funding machine, a long-time Roma activist who works in Kosovo’s Ministry of Education stopped everything with The Big Question: Yes, it’s worthwhile to learn how to write proposals, she said (I’m loosely paraphrasing here), but what if donors don’t want to fund what the RAE communities need? Donors don’t understand the situation of RAE people in Kosovo well enough to match their funding programs to what RAE activists are proposing, she argued. There is little data on the RAE communities in Kosovo available, RAE people have few representatives in government to advocate on their behalf, and RAE groups have a difficult time communicating their needs to English-speaking donors. How can we bridge this gap in understanding so that more donors offer to fund real empowerment programs, and how can RAE organizations survive in the meantime? Another challenge, she said: most donors expect their grantees to be able to function at a certain level from the beginning – to have some equipment, to be able to report, to have sophisticated financial records. Many RAE-led groups don’t have that capacity, and so continue to be marginalized by the system as it is. If donors don’t adapt their requirements, how can RAE NGOs even get into the game? Do RAE activists have to accept the machine as it is, can they make it work for them, or do they have to find another way to achieve their goals?

She spoke with rising passion, even getting up from her seat to impress her point on the young activists seated around her. Her words were left hanging as the training adjourned; there’s no neat, easy answer to her questions. Some donors are fabulous and work hard to be supportive advocates. Some donors are bound by ideology or bureaucracy; others simply don’t know what the people they’re trying to help really need.

As Shpresa and I make the rounds to RROGRAEK’s current and potential funders over the next few weeks, I’m interested to see how they respond to Shpresa’s vision of what Kosovo’s RAE communities need. The only thing to do is to keep talking, keep informing, keep pushing….