Voices of the Opposition: Fighting for Change & Hoping for Peace in Kenya

“If NASA does not win the election, you will find me fighting in the streets.”

It was a little after 3 p.m. when the music flooded through the office window. The pounding bass and a DJ’s voice rose from below as the streets flooded with a parade of cars and flatbed trucks carrying heavy sound systems. It’s election season in Kenya, and the typical campaign technique is a cross between a traveling circus and a nightclub. Caravans of adoring supporters, many of whom are paid daily to smile and wave zealously, travel around towns blasting music and showing off flashy campaign trucks.

Campaign strategy in Kenya seems to correlate louder and more vivacious caravans with more votes collected on August 8th. Absurd amounts of money are poured into buying campaigners’ loyalty, printing signs and t-shirts, and gathering a train of fancy cars to weave around Nairobi day after day. I’ve grown accustomed to being passed by 18-wheelers full of girls twerking to pop music in the name of their candidate.

When a flock of campaigners for NASA—the opposition party of Raila Odinga who is vying for the Kenyan presidency—paraded past our office on Ngong Road and began swarming our block with people, my curiosity got the best of me. I was magnetically pulled to the energy of the rally and ran to the street to observe the commotion. I wove through about 300 people to watch the Governor of Nairobi address the crowd from the sunroof of a black Range Rover. The caravan consisted of several other candidates for legislative positions who also greeted the lively crowd with pageant waves from sunroofs. 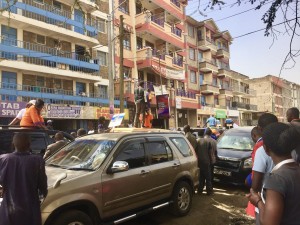 A spokesman on top of a car addresses the crowd. Unfortunately, this is the only shot I took as I was hesitant to pull out my camera.

To understand the party’s political ambitions and gage mounting tension between parties, I spoke with several NASA supporters, most memorably Ben. Ben had a chipped front tooth and broad shoulders framing the round bow of his muscular chest. He was eloquent and told me that though he had a degree in engineering, he hadn’t had a stable job in months. Ben gave a fiery soliloquy about corruption and weak governance in his country, which he felt had betrayed its people by ignoring their need for basic services. “Look at this muck!” he bellowed at the trench of sewage and trash covered in flies that surrounded us. When I asked him if there would be violence after the election, he retorted “I will either live to see change or die fighting for it.”

He pointed to the apartment building above us, about 100 meters from where I work, and said, “This is where I live. I have four daughters and I have already sent them with my wife to our village in the west.” I asked him if he’d be joining them in the coming weeks, and he adamantly shook his head and pointed to the ground, as if he couldn’t be uprooted. “I will stay and fight for them. If I die for change, they will see a better life.” This is not the first time I’ve heard such a dramatic statement indicating that daily struggles for survival fuel opposition to the ruling party. A close friend of mine who supports NASA echoed this sentiment, explaining to me, “Even if you don’t fight after the election, you will die. People are already hungry and dying in the streets.”

Does Ben mean these words or is this just pre-election posturing? Did he manipulate rhetoric to meet or change my perspective because I am a Westerner? I cannot determine these answers; I can only report what I hear and record it in the bank of electoral testimonies that I’ve gathered. “Where is the western media? Where is CNN? Who is on the ground listening to the people?” Ben asked me, for I stood out as the only muzungu observing the rally in the sea of Kenyans. “No one is here asking us about the changes we need. No one is walking these streets and listening to our political grievances,” Ben objected.

“No one will come until there is violence to report. World news won’t speak of our demands for democracy, it will only show us as bloody killers in the street. We will just be seen again as silly Africans fighting,” he continued. Unfortunately, the narrative of the disempowered African responding to inadequate governance with violence is one that the Western media is familiar with and all too comfortable perpetuating.

However, political violence is not a static, singular incident. It is a heightened point of communication along a relatively young democracy’s arc of political history that has not favored its citizenry. Kenyans have been actively engaging in politics and striving to hold their politicians accountable with little success. “The people know what they want and they have the power to make change themselves. Kenya has so much potential, but it is being wasted,” Ben mourned.

We parted with a series of handshakes and wishes to run into each other again soon on our shared block. His handshake, though firm with conviction, was a nurturing embrace telling of his fatherhood and seemingly honed from years of cradling daughters. Clasped in mine were his passionate hands with the capacity to check a ballot in hope or throw rocks in hopelessness. What would come of them after the election? My hope for Ben is that his calloused palms continue to toughen with old age and that thick political callouses will not drive him to kill or be killed in post-election fury. Kenyans want change and they have been galvanized by this election cycle to believe it’s achievable; it would be a waste of potential and democratic promise to turn on the news and see any of them bleeding in the streets.