There was nothing. There was nothing but waiting and dal bhat. On Thursday, Indira had travelled to Kathmandu for a check-up and bedrest after suffering an injury while playing soccer with the neighborhood kids. Chanda, the office secretary and my best (and only) friend in Dhankuta, and I remained in the Dhankuta office ready to pounce into action once we received official approval from Birat Hospital for Care Women Nepal’s upcoming health camp.

The hospital had to decide whether they wanted to partner with us for the health camp, and then either approve or reject the proposed date. Everything – location, staff, timing, posters, flyers, banners, metal prints, food tokens, radio ads, mobilization of volunteers – depended on this approval. We had spent the earlier part of the week waiting for a meeting with Bimala Thapa from the hospital (tomorrow, tomorrow, tomorrow) to even propose a soft date for the health camp and the proceeding surgeries. Each health camp identifies a list of women that qualify for a government sponsored surgery to correct their uterine prolapse, then CWN aids the women who elect to have the operation by covering food and transportation costs associated with the operation for them and a family member.

Indira and Bimala agreed upon dates for the two day long health camp, July 1st and 2nd, and then decided on a surgery date, July 7th, that combined the list of surgery candidates from the previous health camp in April and the upcoming health camp in July. Bimala Thapa left us after the meeting just as she found us: in a sea of waiting and dal bhat. 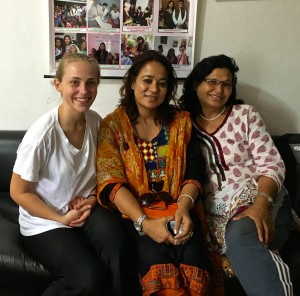 Indira, Bimala, and me in the CWN office

There was nothing besides waiting and dal bhat until there was only chaos. On Sunday, a workday in Nepal, Indira called Chanda at around 11:00 telling her to call the women on the surgery list from the health camp in April to see if they would be willing to travel to Biratnagar the next day for their operations. There had been some type of miscommunication and the surgeries had to be done within the week in order to be covered by the government – something having to do with a quota.

It goes without saying that this isn’t a light decision for these women or their families. A hysterectomy, even one that will improve their quality of life by tenfold, is a monumental decision for any woman. A common misconception between under-educated Nepali women is that they will most likely die if they receive this operation, so there is an added layer of fear for these women and their families. Often, a woman’s decision to receive the operation is met with negativity and she must convince her family to support her wish to correct her prolapse.

As if those obstacles were not enough, many of these women and their families are daily workers or field workers. The surgery requires time away from the planting and harvesting for not only them, but a family member as well – something that the family must financially plan around. In the end, 4 women out of a list of 25 committed to have the operation within the week: Ratna Kumari Shrestha, Dhanmaya Limbu, Maan Kumari Basyal, and Uma Kumari Limbu. 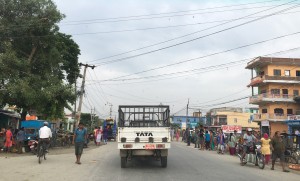 Biratnagar is the second largest city in Nepal and was our destination for the surgeries.

I don’t mean to brag, but I’m somewhat of a pro when it comes to vomit. If collegiate EMS has taught me one thing and one thing only, it’s vomit. I’m fine with the sound, the smell, and I will even hold the bag for you while you do it. But I had never been emotionally affected by vomiting until the four hour long car ride to Biratnagar with these four women.

Already having traveled two hours to Dhankuta and not used to riding in cars, they sat in the backseat clutching their plastic bags. It got to the point where we would go around a curve or hit a bump and I would just know what was coming. The driver, bothered by the smell of vomit, would then drive a little faster so the wind coming through the open windows would air out the car. I cringed the whole time. Not only were they taking time off work, facing an operation that for all they knew could kill them, but even the car ride was a major source of discomfort for these women. Amazed by their strength and determination, I made a mental note to pick up motion sickness medication for the way back. 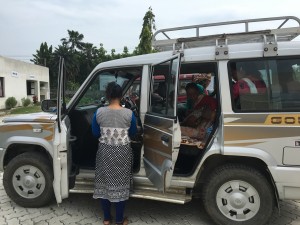 It was as if we had come full circle, for at this time there was again nothing but waiting. We arrived at Birat Medical College Teaching Hospital at 3:35 in the afternoon, and the women clambering out of the car the second it parked. Some type of time warp happened in Biratnagar that day because I swear could have lived another full life in the time it took for the next two hours to pass. Bimala was doing business at another hospital, so Chanda had to do some hardcore coordinating with the hospital staff to get the ball moving to admit these women.

While Chanda was doing that, she also had to keep telling the women to go sit down in the waiting area instead of crowding the front desk or sitting on the ground by the front desk in some cases. The family members wandered around, unsure of what to do or where to put their luggage. Also not knowing what to do, I just stood next to Chanda and tried to make myself seem busy so men wouldn’t try to speak English with me (I know people are just curious and mean well, but I smelled really bad and I was tired and I hadn’t even been in Biratnagar long enough to learn how to pronounce it). The women underwent initial check ups, blood work, x-rays, among other tests before being sent upstairs to wait for the gynecological ward to admit them. 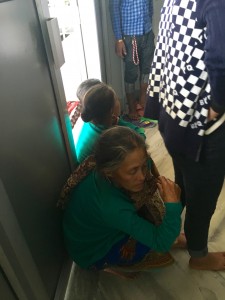 Waiting for the gynecological ward was sticky. There weren’t enough seats, or even space, for ten of us outside of the ward. There were flies everywhere – more flies than I had ever seen in one place – but only in that small space, nowhere else in the hospital. There wasn’t AC, but we weren’t allowed to wait outside along the terrace. Chanda ran in and out of the ward, up and down the stairs, and probably into another dimension entirely trying to coordinate it all. Nepali was flying everywhere and I just stood there confused and smelly. Just as I finally accepted that time was just a human construct and began to question whether or not I actually existed, Chanda filed the women and their family members into the ward. “Come come,” she said as she led me out of the hospital. Our first day was complete.