“We Don’t Have a Problem; We Live in Peace” 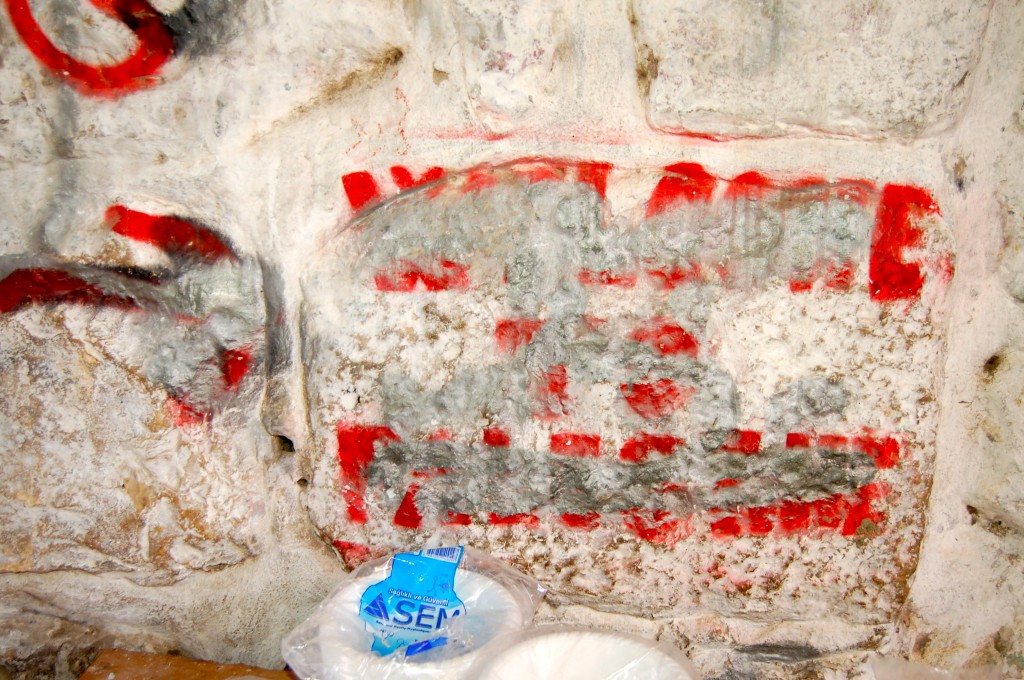 Graffiti in the Old City that reads “Welcome to Palestine” and has been crossed out.

Hebron is also a city with religious significance. Timelines from the Jewish, Muslim, and Christian traditions differ on the founding of the city and which groups historically had control over it, but all three religions acknowledge it as a holy place. It is believed that Abraham, the father of all three religions, lived there around 1800 BCE.

The modern history of Hebron is even more contentious. The first Israeli settlements were established in the city shortly after the Arab-Israeli War in 1967. In 1997 following the Second Intifada, Hebron was split into two areas: H1 controlled by the Palestinian National Authority and H2, under Israeli control. The city has seen more violence than most places in Palestine because of this unique partitioning. 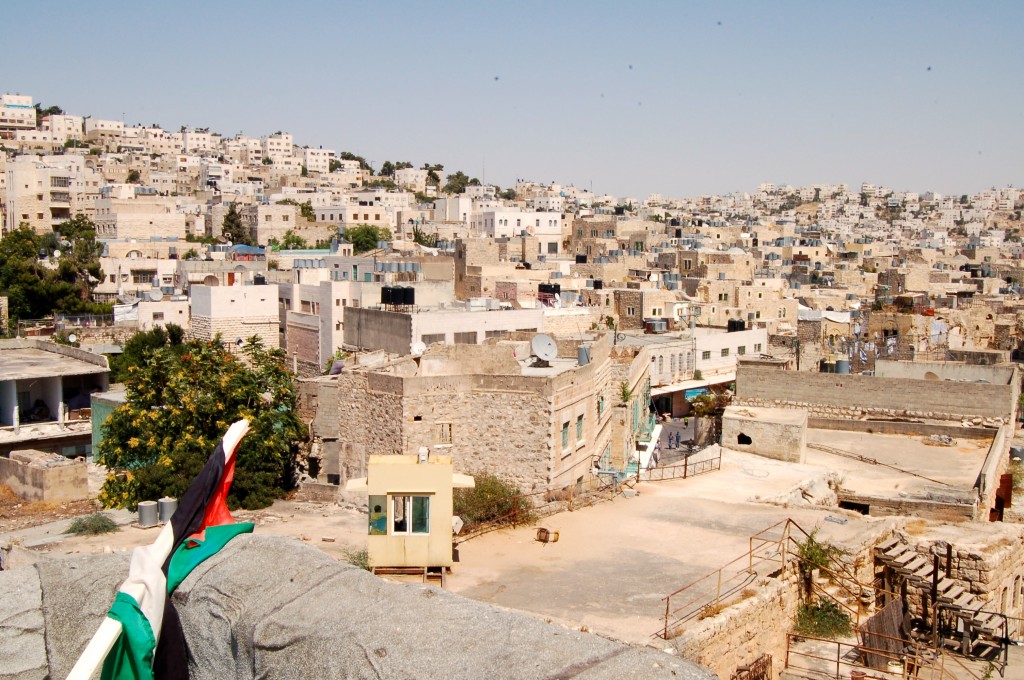 This is the view of Hebron from the only house in the Old City that settlers have not occupied. 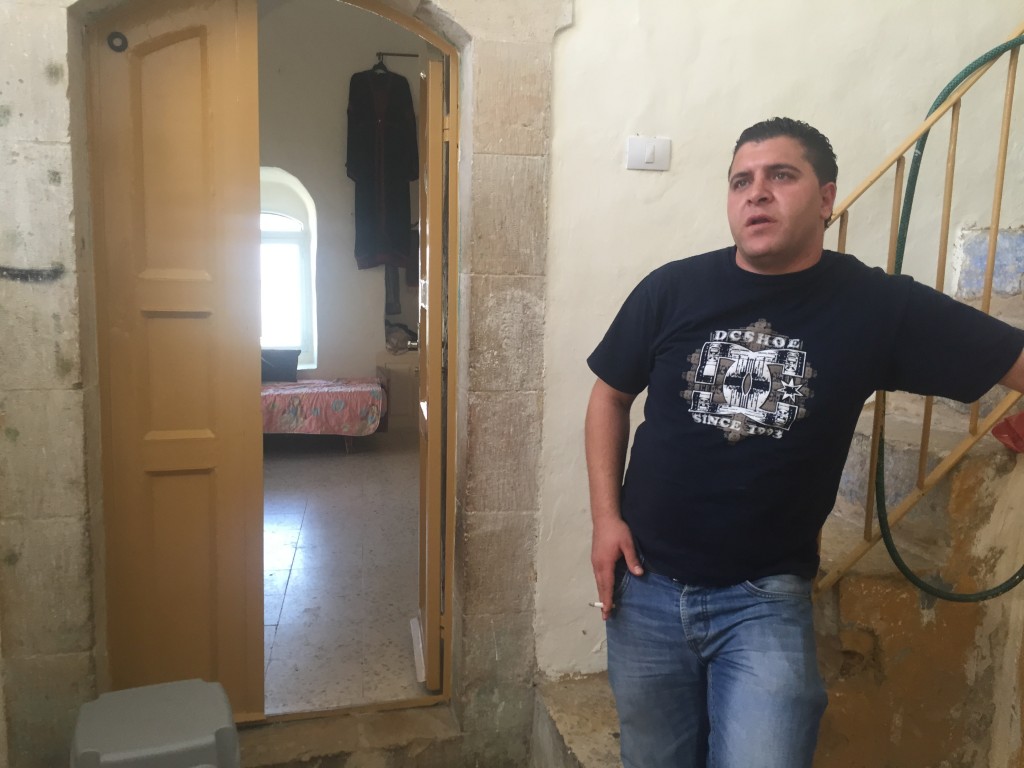 This is the last unoccupied home in the Old City. This man and his family continue to live here and resist Israeli attempts to seize their home. 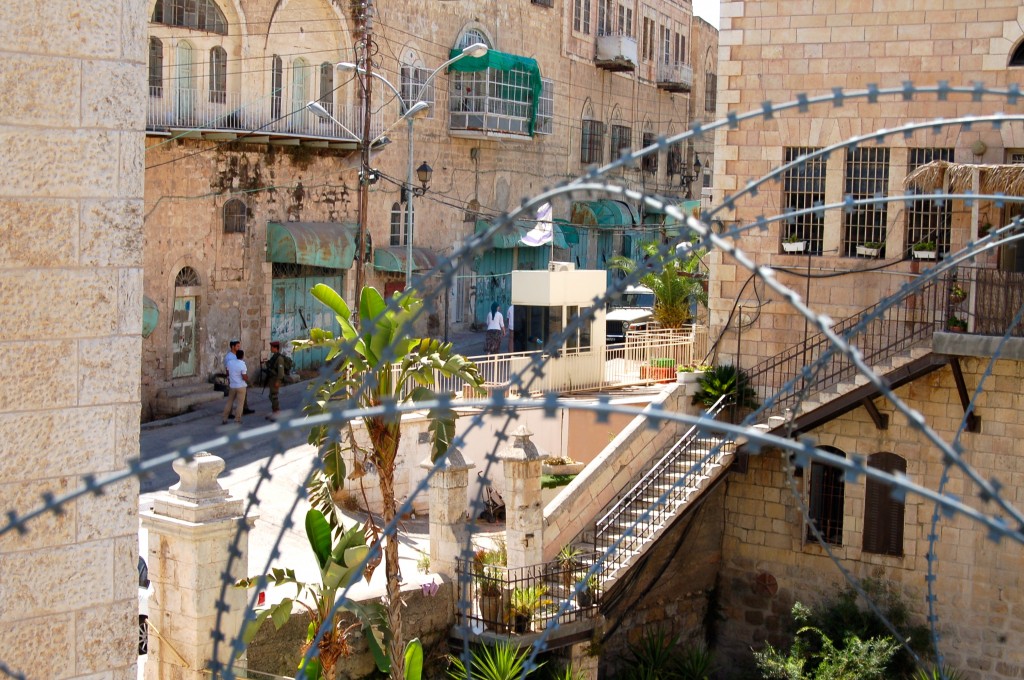 This is the view from that same rooftop in the other direction. On the left, an Israeli soldiers talks to settlers, and on the right an Israeli flag flies at a security outlook.

Settlers literally live above Palestinians in the Old City. Palestinians are only allowed to live on the first floors of buildings, and settlers live above them. Barbed wire, tarps, and fencing vertically divides the two populations and help to protect Palestinians from garbage and debris thrown upon them by settlers.

The settlements within Hebron are surrounded by Palestinian neighborhoods that appear deserted. Almost all of the shops are boarded up and many homes remain empty. Shuhada Street is the largest of these closed down streets. This once-thriving commercial center has been turned into a ghost town. Many Palestinians refer to this street as “Apartheid Street.” 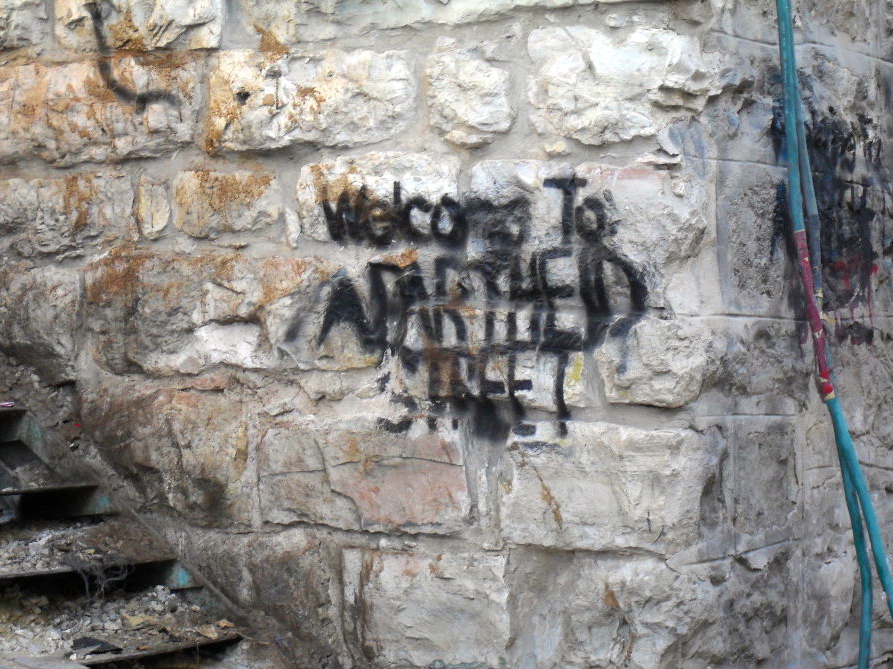 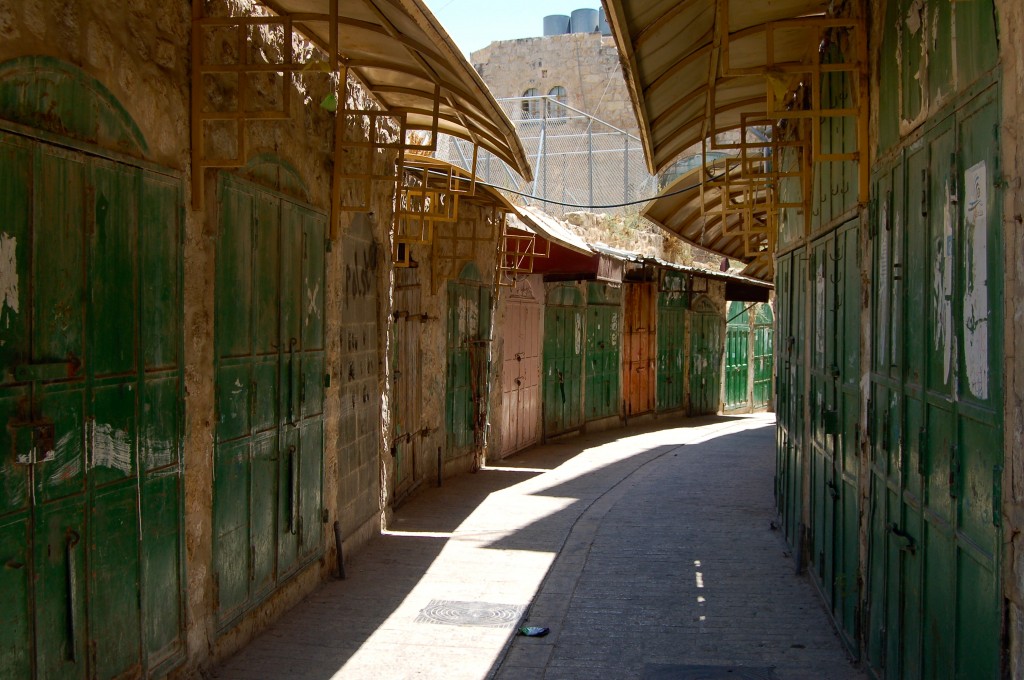 A street in the Old City that is now virtually deserted. These shops were forcibly closed by Israeli soldiers.

I walked with Nidal, my Palestinian guide, through the Old City as we made our way to al-Ibrahimi Mosque/The Tomb of the Patriarchs. This building marks the central holy site in Hebron and sits above the place where Abraham, Sarah, Isaac, and Ishmael are believed to be buried. The mosque was also the site of a massacre in 1994. A Jewish settler came into the mosque and opened fire on people inside praying, killing 29 and wounding over 100. It was after this massacre that the site was partitioned and a synagogue was created that now takes up 60% of the building. 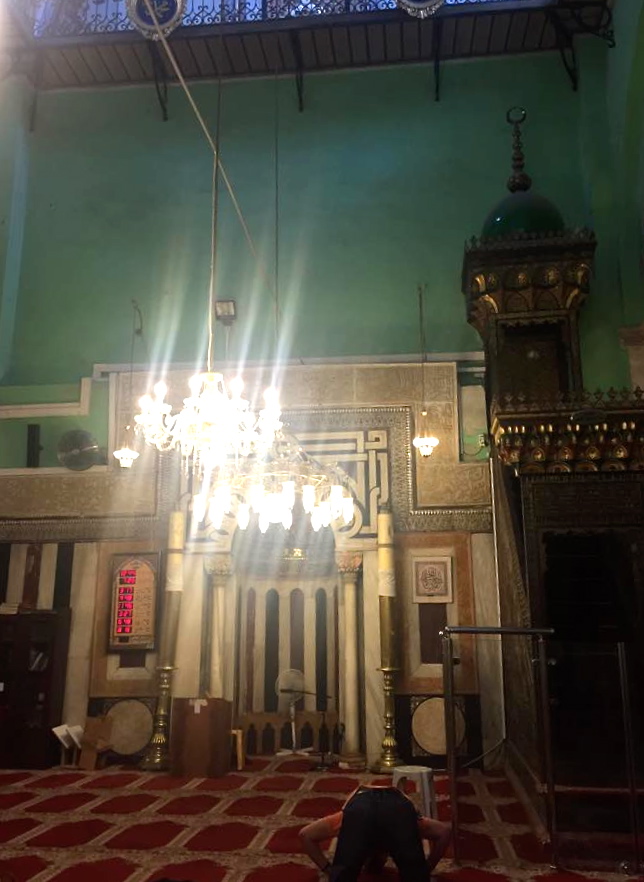 A man prayers inside the al-Ibrahimi Mosque. This is the site of the 1994 massacre that left 29 dead. 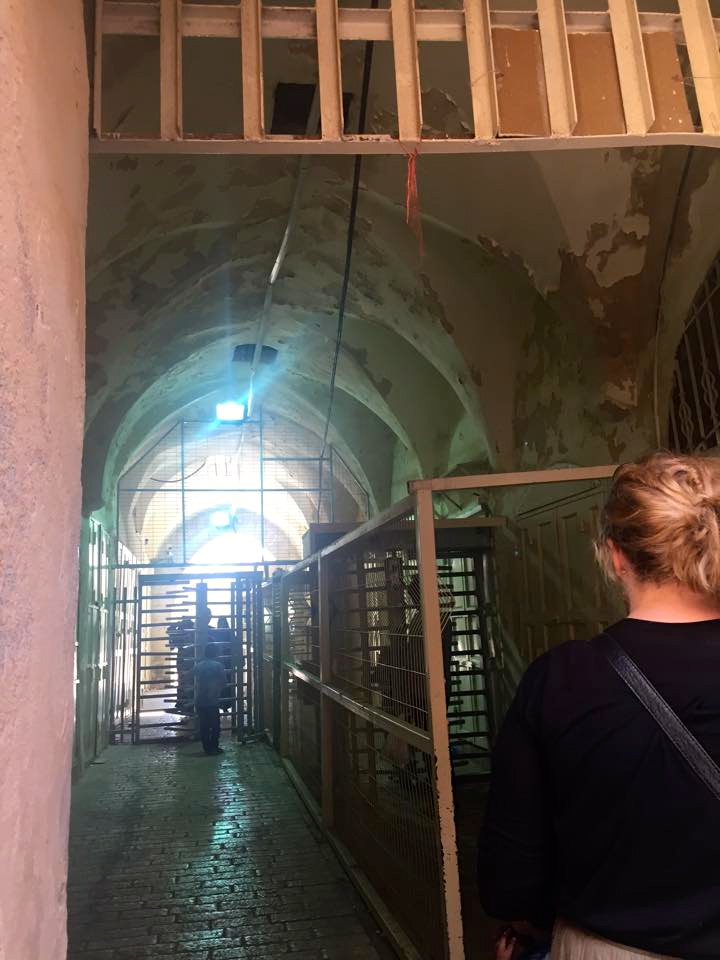 Navigating the Old City can only be done by crossing through a series of Israeli-controlled security checkpoints.

All throughout our journey we had to cross through security checkpoints. There are over 20 checkpoints in the 1km area surrounding the Tomb of the Patriarchs. They separate settlements from Palestinian neighborhoods and isolate neighborhoods from one another. Legally, Israeli soldiers are allowed to detain individuals at each checkpoint for up to three hours, which means it could literally take days just to walk down the street.

Nidal wanted to speak with some of the Israeli soldiers stationed at these checkpoints to hear their perspectives on the situation in Hebron. Some wouldn’t speak to us, but a few agreed. As Nidal was stopped at one of the checkpoints, he asked the soldier one question “What is the solution for the problems between Israelis and Palestinians?”

The soldier simply replied, “We don’t have a problem; we live in peace.”

There are many words I would use to describe how Israelis and Palestinians live in the West Bank. Peace is not one of them. The constant security checks, the occupation of land, the ubiquity of soldiers – this is not peace for Palestinians or for Israelis.

We walked away from the soldier, and I was outraged that he could have possibly said what he did. Nidal thought about his words differently: “I don’t blame the settlers or the soldiers as individuals. I blame the government. I blame the media that feeds them lies and propaganda. They are brainwashed from the time they are children to hate us. It’s not their fault.” 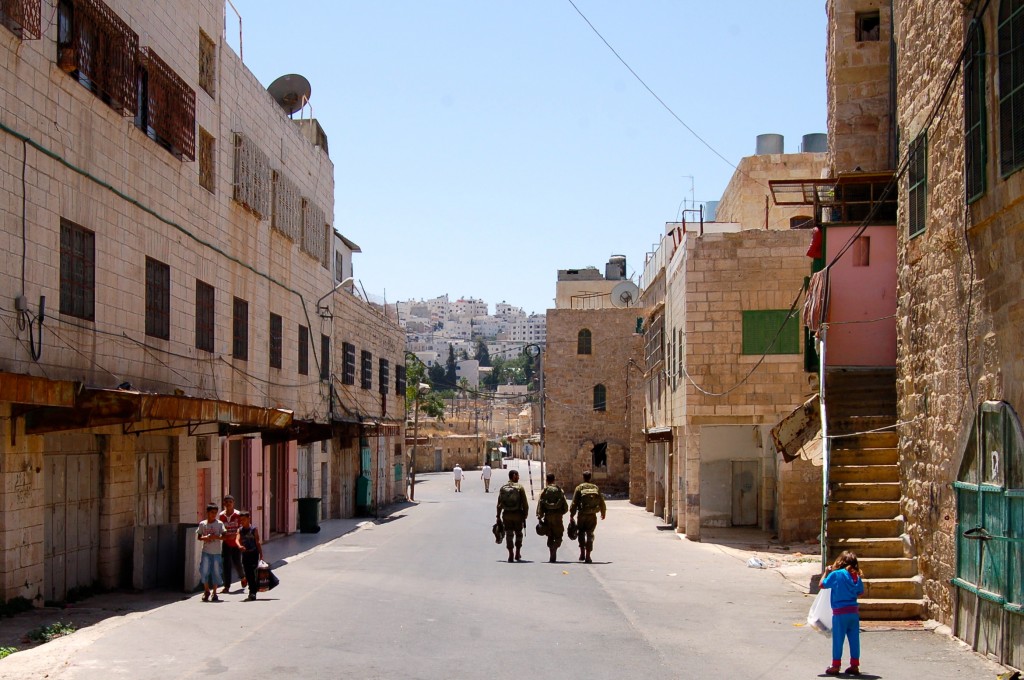 Israeli soldiers walk down the center of the deserted Shuhada Street as Palestinian children linger on the sides.