I felt welcomed the moment I entered Fundación MAVI (Mujer, Arte y Vida; Woman, Art and Life) for a campaign called “We Women Want Safe Cities”, three days after my arrival in Cali. Women were sitting and standing in a loose circle, talking, singing and rolling up yellow tape that read “PELIGRO: El Machismo Mata” (Danger: Male Chauvinism Kills). I sat down with them, introduced myself and started rolling up tape too. I expected them to ask me questions, about my accent, where I was from, what I was doing there, but no one did. I was one of them: not a foreigner, not an outsider, just another activist in Cali. All that mattered was that we were all working towards the same goal: women’s empowerment.

“United, together, we feel stronger and more confident”, said Julieth Tamayo, one of the organizers. She struck me as full of energy, poised, compassionate – the type of person who can both inspire and make everyone feel calm and comfortable. A natural leader. When I asked what group she belonged to, she told me that she had been working for years as a community leader and had helped found the Escuela Politica de Mujeres Pacificas (Political School of Women Pacifists). Noticing the absence of women leaders in the peace process with the FARC, Julieth and others had decided to open a space for dialogue about the conflict from a gendered perspective and prepare women to take on leadership roles, promote innovative policies from feminist perspectives and construct alliances between feminist organizations at all levels.

The “We Women Want Safe Cities” campaign, organized by the Escuela Politica de Mujeres Pacificas and supported by many other women’s groups, aimed to raise awareness about the dangers that women encounter in the city and promote women’s rights and freedom in Cali. The women separated off into groups to mark areas known to be dangerous for women with the yellow tape saying “PELIGRO: El Machismo Mata”. My group went to a bridge crossing over a highway and linking a health clinic to the bus terminal. During the day, the bridge is busy, but as soon as it gets dark, women prefer to run across the highway rather than walk alone on the bridge, where they risk being mugged. 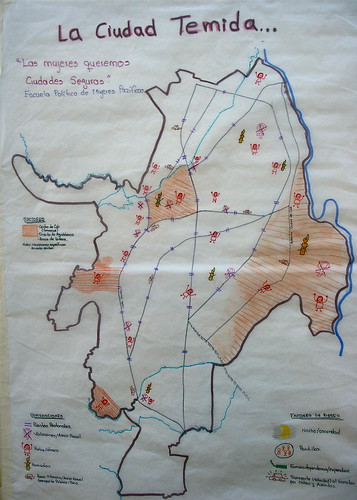 The campaign reminded me of “Take Back the Night” in the US. The goals the women spoke of were similar: “We women want a city with safe public transportation, where movement is comfortable and harmonious. We women want a city with lots of public parks, calm spaces, filled with colors and flavors, in which one can breathe, run, feel safe and joyous. We want a Cali filled with games, in which we can dress at our every whim, walk alone at any hour of the day without fear of being raped or robbed, claiming back the night, the company of the moon and the ability to dream under starry nights.”

After raising awareness by speaking with passersby, the groups rejoined in a park called San Antonio to view banners and alternative maps of the city; listen to speeches, poems and songs; watch traditional dances and celebrate local culture “that deserves to be enjoyed without fear”.  Norma Lucia, one of the organizers, declared: “We at the Political School of Women Pacifists believe that male chauvinism does in fact kill. Not only do men kill each other fighting in the streets, competing to show off their masculinity, but they kill our hope, our confidence, our desire to go out at night, our desire to dress the way we want… Afraid to go out to the street, we could say, ‘Ok, we’ll stay at home’, but even at home they kill us!”

Here’s a video I made of the afternoon: <httpv://www.youtube.com/watch?v=6fz8muYOBbc>