Where are the Perpetrators?

On Sunday, August 3rd, Ram invited Prabal and I to attend a meeting between families of the disappeared and the Commission of Investigation on Enforced Disappeared Persons (CIEDP) at the Commission’s office. After brief introductory statements, Ram addressed the Commission. The Commission is preparing a final report to submit to the government with recommendations about the kinds of programs and policies that need to be put in place to support victim families. Ram expressed NEFAD’s expectation that the Commission produce a strong final report that keeps victims and their needs at the center of their recommendations for further transitional justice efforts. He continued by stating that the Commission needs to clearly outline the procedure they will adopt for investigating all of the registered cases of enforced disappearance. 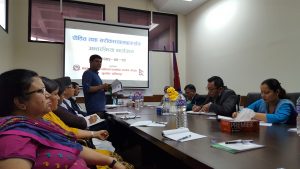 Investigating thousands of registered cases of enforced disappearance will take many years. Assuming the appropriate legal mechanisms are in place, investigations must also produce concrete evidence for perpetrators to face any legal consequences. Given how much time has passed since the conflict, concrete evidence is hard to find. Ram poignantly stated “Families are living evidence.” He expressed that victim family associations have continuously cooperated with the procedures of the Commission, therefore, the Commission’s accountability to victim families is deeply important.

There was one moment in the meeting that continues to resonate with me. Ram asked the Commission why they didn’t they invite perpetrators to the meeting? This speaks to a larger challenge in many transitional justice processes around the world. More often than not, survivors of conflict and perpetrators of violence must live side-by-side after a peace agreement. Is it possible or even desirable to facilitate conversations between victims and perpetrators of violence and various crimes? What is the goal of those conversations? What would success look like? Of course, it depends on the context and ultimately what each person wants, but ethical questions like these are what make transitional justice so complex.

After Ram’s statements, a woman from a victim family echoed his sentiments. The pain and anger in her voice was tangible as she expressed to the Commission that she has clearly outlined her case and named the perpetrator to no avail. “Has the Commission contacted them?” she asked.

As the meeting continued, family members’ voices become louder and more passionate as they expressed their demands to the commission and frustrations with the transitional justice process to date. Families explained the various challenges they experienced since losing their loved ones in the conflict and made impassioned speeches expressing the need for a complete reparation packages including monetary support, scholarships to support their children’s education, health care assistance, psychosocial support, and job training and employment opportunities. One man also proposed making reservations within quota systems to support families of the disappeared. Certain jobs and scholarships amongst other opportunities maintain quotas for indigenous communities, women, and other minorities. He recommended that these opportunities also include reservations for family members of the disappeared. If families of the disappeared had ID cards verifying them as a victim family, they could verify their status for quota purposes and avoid issues with service delivery from government offices as many families have previously experienced. 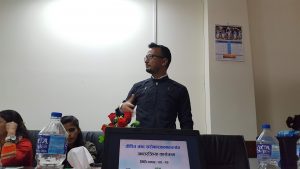 Family members of the disappeared addressing the Commission

The Chair of the CIEDP, Lokendra Malik, addressed the points the families brought up in the meeting with some short remarks, after which the meeting abruptly concluded. He acknowledged their concerns and said that they would do the best they could to produce a strong report including a recommendation for the quota proposal. As he stated at the memorial event for Bipin Bhandari and Dil Bahadur Rai , he repeated that the lack of laws criminalizing enforced disappearance prevent them from holding perpetrators accountable, and the lack of financial and staffing resources from the government have hindered their progress on other fronts. While meetings provide families of the disappeared an opportunity to share their perspectives and communicate directly with commissioners, the lack of specific, concrete action steps to move victim centered transitional justice processes forward was disheartening.

Transitional justice is a complex process everywhere. It involves many people with diverging interests and needs and often works through governments and bureaucracies. While there have been many challenges to meeting the needs of victims, the unity between various networks of victim families is one of the most notable elements of the transitional justice process in Nepal.